Armor served dual functions — both as protective battle gear and fashion statement. And it was worn by men and women alike.
By Joseph Golder March 31, 2022
Facebook
Twitter
Linkedin
Email 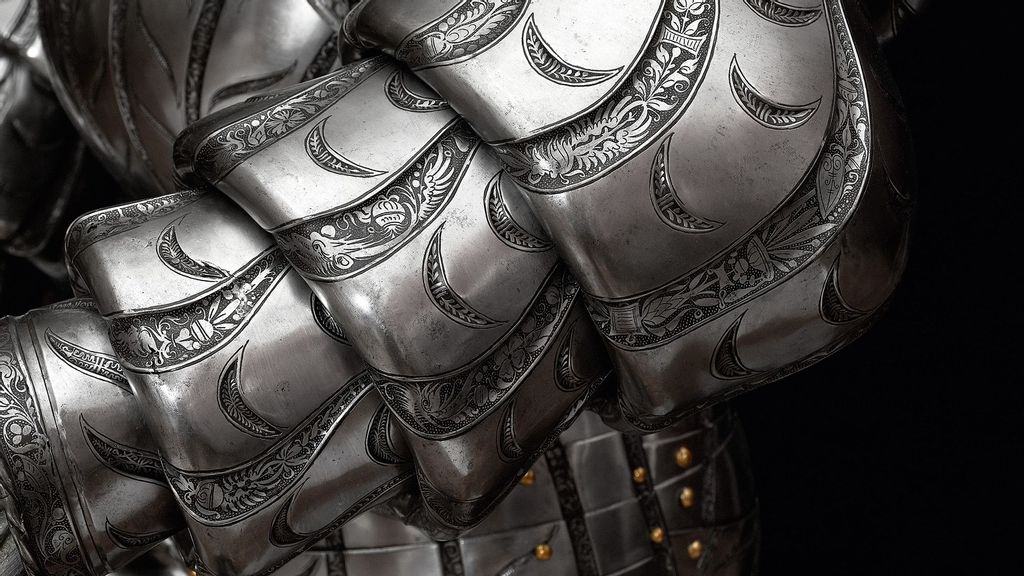 Armor for Wilhelm von Rogendorf (1481–1541) at the Kunsthistorisches Museum in Vienna, Austria. Contrary to its popular image as clunky and cumbersome, the armor is so well-made its wearer can do somersaults in it. (KHM-Museumsverband/Zenger)

Some may know that armored knights used upturned codpieces to attract woman at parties, but a new exhibition of suits of armor shows that the fashion was also adopted by bold, gender-fluid noblewomen to show off their power.

The “Iron Men – Fashion in Steel” exhibit, which runs through June 26 at the Kunsthistorisches Museum in Vienna, Austria, features 170 artifacts that throw a new light on this complex subject, along with selected paintings, textiles and sculptures.

Men liked the exaggerated codpieces because they felt more masculine, brave and virile during public events, such as tournaments, and at court, according to the museum.

The museum has assembled codpieces from all over the world — historical Habsburg suits of armor from Austria’s own collections, as well as pieces from London and New York.

The exhibition shows both the fashionable aspect of armor and its use as a disguise.

“Tournaments were often held during Carnival and many participants wore fantastic fancy-dress armor — symbolic costumes that allowed their wearers to assume a role, while displaying their skills and bravery in front of a large audience,” the museum explained.

“For these jousts, armorers produced visors shaped like the head of a man or an animal, or with grotesque mythological faces.”

The exhibition video demonstrates the suits of armor are so well-made their wearers can do somersaults in them.

Also included is a rather uncomfortable-looking piece, a steel corset from the Wallace Collection in London, England, which was made by Eleonora of Toledo, Duchess of Florence, with two cut-outs for the wearer’s breasts to fit through.

The exhibition hopes to dispel the contemporary myths and stereotypes seen in Hollywood films of the “medieval warrior both brave and manly but also immobile and clumsy, encased in heavy steel armor apparently designed solely for fighting — whether on the battlefield or in tournaments, a sport that seems savage and martial to a modern-day spectator.”

Instead, the museum, in a statement explains these misconceptions are largely the product of 19th century views and contemporary films, from “Ivanhoe” to “Monty Python and the Holy Grail” to “Lord of the Rings” and “Game of Thrones.”

The museum’s “Iron Men – Fashion in Steel” exhibition explores “the prominent role armor played in early-modern society, art and culture,” illustrating “its importance as a political and dynastic symbol, as a diplomatic gift, as a personal and historical souvenir, and, last but not least, as fashionable steel attire and a fantastic, symbolic disguise — across religious, ideological, and gender boundaries.”

While the museum said Renaissance armor was primarily a form of protective clothing worn on the battlefield and during a tournament, the imposing clothing did play a central role in the life of a nobleman.

Armorers such as Lorenz Helmschmid in Augsburg, Germany, and Filippo Negroli in Milan, Italy, were well-paid specialists who created exceptional and unique artworks. The museum said each piece reflects “the aesthetic preferences of the period in which it was produced.”

The fashionable side of armor, including puffed sleeves, imitated the landsknechts, mercenary troops from southern Germany.

The museum also says that “noblemen frequently donned various disguises, including dressing in women’s clothes, to attend the costumed dances held in the evenings.”

But the museum explains that “cross-dressing was part of the chivalrous culture of the Renaissance. Our knight in shining armor was not only brave and strong, he was also fashionably attired and sometimes even slightly gender-fluid.”

And wearing suits of armor was not just something for men, women also wore them.

The museum said: “Very much a male piece of clothing, armor was closely connected with the construction and display of masculinity. Wearing armor was regarded as a male domain and celebrated in early-modern chivalry. But literary and historical documents tell of women wearing armor and participating in battles, which countered contemporary expectations of female gender-specific behavior.”

The museum also dispels another myth, arguing that “armor, or to be exact, plate armor that completely encases the wearer’s body, is not a medieval phenomenon, but dates from the early modern era.”

The first fully functioning sets of armor were produced in northern Italy in the early 15th century, and they reached their apex during the following two centuries. Complete suits of armor were devised between the early 15th and the first half of the 17th centuries to successfully fend off lances and swords. They were used as protection against infantry weapons, including pikes, arrows and crossbows.

But changes in warfare, such as the development of firearms and cannon, played a major role in the demise of the armor as military protective clothing.

The museum explained that despite suits of armor weighing around 44 to 66 pounds, the weight was distributed over the entire body. The protective clothing was designed to ensure the wearer could move with ease. Otherwise clunky, immobile armored men would have faced off on Europe’s battlefields during the 15th and 16th centuries.

In order to ensure this flexibility, plate armor comprises numerous individual pieces, often as many as 200. This meant that walking, running, and jumping was not a problem.

Masterpieces from the Imperial Armory in Vienna — the world’s most important collection of its kind — form the heart of the exhibition.

Also on show are loans from the Metropolitan Museum of Art in New York, the Real Armeria in Madrid, the Wallace Collection in London, and the Ronald S. Lauder Collection. Some of these artifacts have never been shown outside their home collections and were extensively restored for the exhibition.

There are also important loans of paintings from the Metropolitan Museum of Art in New York and the Staatliche Kunstsammlungen Dresden, loans from the Victoria & Albert Museum in London, the Albertina and the Wien Museum in Vienna, and Ambras Castle in Innsbruck, as well as fragile, rarely exhibited and newly restored artifacts from the holdings of the Imperial Armory.