The full Pink Moon will rise on Saturday, April 16, although despite its nickname, it will not appear pink.
By Brian Lada March 31, 2022
Facebook
Twitter
Linkedin
Email 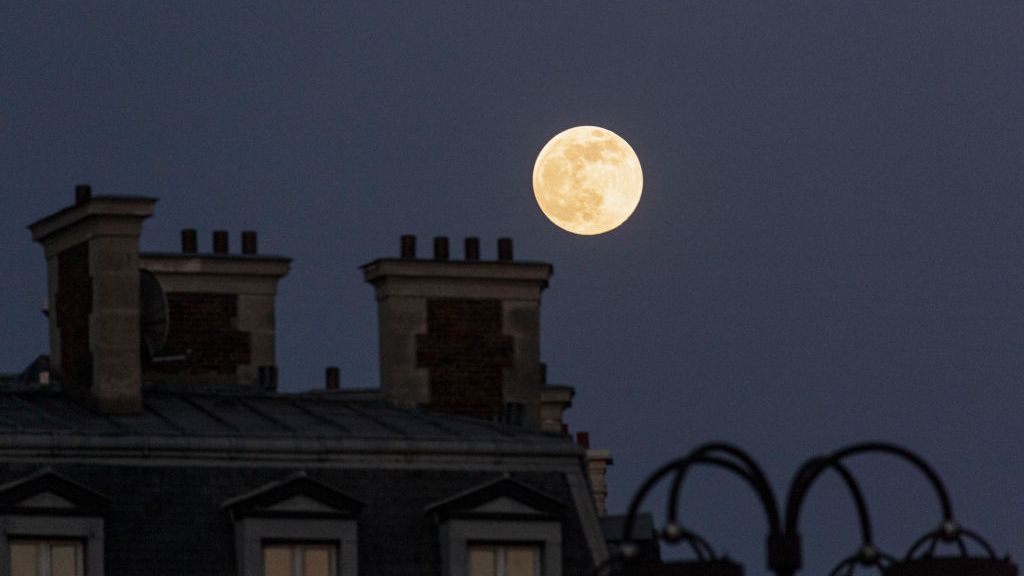 April will be a month for night owls and early risers as some of the most awe-inspiring astronomy events of the month happen during the second half of the nighttime hours, including the first meteor shower since January.

The milder spring weather may also be a bit more comfortable for stargazing compared to the often frigid winter nights, but there is a trade-off. Spring is often one of the cloudiest times of the year across North America, potentially disrupting views of the stars, planets and shooting stars.

This April also marks two years until the next total solar eclipse is visible from the contiguous United States, a must-see event that will be witnessed by millions.

Here are the astronomy events that you won’t want to miss in the coming weeks:

March ended with Venus, Mars and Saturn gathering in the early morning sky, and the show will continue through the first full week of April.

Before the trio drifts apart, Mars and Saturn will come together, appearing extremely close to each other on the mornings of Monday, April 4, and Tuesday, April 5, about an hour before sunrise, local time.

The two will shine off to the right of Venus, which is currently the brightest object in the morning sky before sunrise.

The pairing, known as a conjunction, is the first meeting of these two planets since March 31, 2020.

The middle of April will be a great time to observe the moon as it glows brightly during the third weekend of the month.

The full Pink Moon will rise on Saturday, April 16, although despite its nickname, it will not appear pink. Instead, the name derives from the wild ground phlox, a pink flower that typically blooms in April.

Other nicknames for April’s full moon include the Breaking Ice Moon, the Frog Moon, the Budding Moon and the Super Maker Moon.

Meteor showers are one of the most popular astronomical events, and after an extended period without one, stargazers will finally have the chance to spot shooting stars at the end of the month.

The Lyrid meteor shower will peak on the night of Thursday, April 21, into the early hours of Friday, April 22. It is a typical shower with around 15 to 20 meteors per hour, but it usually gets extra attention as it is the first event of its kind since the Quadrantid meteor shower which peaked on Jan. 2.

The best time to watch this year’s Lyrids will occur between midnight and 2 a.m. local time before the moon rises. Once the moon climbs above the horizon, its light will make it difficult to spot some of the dimmer meteors associated with the Lyrids.

Just two weeks after the Lyrids, the Eta Aquarid meteor shower will peak, giving folks another opportunity to spot some shooting stars.

Many astronomy events surrounding the moon can easily be seen in the sky, but the last day of April will feature an uncommon lunar happening that will go unnoticed.

The term blue moon has become popularized to describe the second full moon that occurs in one calendar month. At the end of April, its counterpart will occur, or the second new moon in a calendar month. This is known as a black moon.

During a new moon, the part of the moon that is illuminated by the sun is directed away from the Earth, meaning that Earth’s celestial companion cannot be seen.

The last time a black moon occurred was in July 2019, and it will not happen again until December 2024.

On Aug. 21, 2017, millions of people from Oregon to South Carolina witnessed day turn into night as the sun, moon and Earth aligned to create a total solar eclipse.

In just two years, people across the contiguous U.S. will once again have the opportunity to stand in the shadow of the moon during a spectacular total solar eclipse on April 8, 2024.

“The 2017 eclipse simply increased everyone’s awareness about solar eclipses and the 2024 eclipse will create even more of a buzz,” expert eclipse photographer Dr. Gorgon Telepun said. “And we won’t be disappointed because compared to 2017, this is a long eclipse!”

The area where the total eclipse will be visible, known as the path of totality, will include major cities including Dallas, Indianapolis, Cleveland and Montreal.

It is never too early to start planning for this event, which Telepun says will last nearly twice as long as the 2017 eclipse.