The season officially starts June 1, but there is a high chance for a preseason storm to develop.
By Kevin Byrne March 31, 2022
Facebook
Twitter
Linkedin
Email 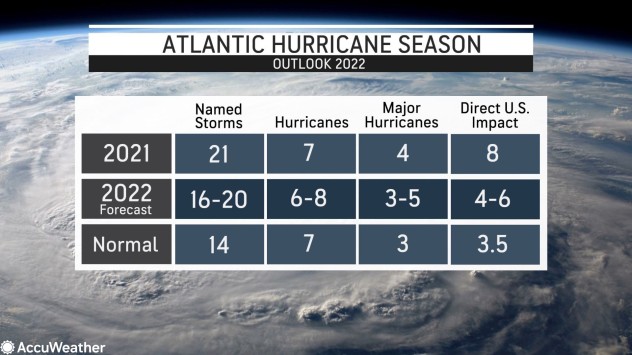 If more than 21 named storms end up taking shape, that means forecasters will have exhausted the designated storm list for the third consecutive year and will have to use a supplemental list for any additional storms that develop. (AccuWeather)

The Atlantic hurricane season is two months away, with the official start arriving on June 1, but AccuWeather forecasters released predictions for the coming season this week, noting that there is a high chance for a preseason storm to develop and that another active tropical season is expected. AccuWeather forecasters emphasized that now is the time to prepare, especially since some communities are still recovering from devastating storms over the last couple of years.

The past two hurricane seasons were extraordinarily active, as AccuWeather meteorologists predicted, with the historic 2020 season reaching unprecedented levels and setting a new record for the number of named storms with 30. The 2021 tropical year was almost as prolific with 21 named storms, making it the third most active on record in terms of named systems. It also forced meteorologists to use the entirety of the designated storm name list for the second straight season.

Of course, the seasons prior to 2020 and 2021 certainly weren’t underachievers, with the devastating trio of major hurricanes — Harvey, Irma and Maria — striking over a one-month stretch in 2017, and hurricanes Florence and Michael blasting parts of the Southeast in 2018. In fact, the last season with a below-normal number of named storms was 2015

So what can residents living in hurricane-prone areas of the United States expect in 2022? More of the same, unfortunately.

AccuWeather’s team of tropical weather forecasters, led by veteran meteorologist and hurricane expert Dan Kottlowski, is once again predicting an above-normal season in terms of tropical activity in the Atlantic, as well as a higher-than-normal chance that a major hurricane could make landfall in the mainland United States, Puerto Rico and the U.S Virgin Islands.

Specifically, Kottlowski’s team is forecasting 16-20 named storms and six to eight hurricanes. Of those hurricanes, about three to five are forecast to reach major hurricane status, which occurs when a storm reaches Category 3 strength with winds exceeding 111 mph or higher.

AccuWeather’s forecast of 16-20 named storms is higher than the 30-year average of 14 per year, while the projection of six to eight hurricanes is about in line with the normal of seven. It’s also nearly identical to how 2021 played out. Last year, the 21 named storms included seven hurricanes and four major hurricanes. Eight of those storms made a direct impact on the U.S. About four to six direct impacts are predicted for 2022.

In order to make such a long-range prediction, Kottlowski’s team studied a number of current weather trends, past hurricane seasons and climatological models to help piece together this meteorological puzzle. Here’s a deeper look at how several influential factors will shape the 2022 season.

The climatological phenomenon known as La Niña can help shape weather patterns worldwide, and in particular, play a major factor in how active a hurricane season can become.

La Niña is part of a three-pronged climatological pattern known as the El Niño Southern Oscillation [ENSO], which is a short-term climate fluctuation that is determined by the warming or cooling of the waters in the equatorial Pacific Ocean.

When a La Niña phase is present, as was the case in the past two extremely active years, the amount of vertical wind shear in the atmosphere can be limited as westerly winds typically stay farther to the north and away from the tropical Atlantic. An abundance of vertical wind shear, which typically occurs over the Atlantic during El Niño patterns, can often stymie burgeoning tropical cyclones or limit their development altogether.

As of March 30, Kottlowski, who has been with AccuWeather for more than four decades, says a weak La Niña is in place and it is expected to persist through the beginning of the tropical season. With less wind shear in the atmosphere, there will be one fewer tropical hindrance in play. Kottlowski noted that a shift to a neutral phase could occur during the summer but if La Niña remains in place, or even intensifies, then it’s possible that there could be more than 20 storms, he said.

If more than 21 storms end up taking shape, that means forecasters will have exhausted the designated storm list for the third consecutive year and will have to use a supplemental list for any additional storms that develop. The first three storms that form in the Atlantic this year will be named Alex, Bonnie and Colin.

The status of La Niña throughout the summer will be closely monitored by meteorologists. If the La Niña phase ends up fading away over the summer or early in the fall, the tropical activity could wind down well before the official end of the season on Nov. 30.

Tropical depressions or storms have gotten a jump start on the official June 1 start date in the Atlantic for seven consecutive seasons, something that has caused the National Hurricane Center (NHC) to consider moving the season’s start date to May 15.

Kottlowski said that in addition to the presence of La Niña, above-normal sea-surface temperatures in key tropical development regions will result in a higher-than-normal chance of preseason development for the eighth year in a row. Temperatures were already above normal in many areas that meteorologists closely scrutinize for tropical systems during late March.

“Sea-surface temperatures are above normal over much of the Gulf of Mexico and the Caribbean and even off the East Coast of the United States, especially the southeast coast of the United States, and these are critical areas for early season development,” Kottlowski said. This includes much of the central Atlantic, the chunk of the ocean forecasters refer to as the main development region, he added.

Sea-surface temperatures near Key West, Florida, were about 76-78 degrees as of March 28, which is about 1.6 to 3.8 degrees Fahrenheit above normal.

Warmer-than-normal waters in March often indicate areas in the basin will be sufficiently warm for tropical development by the start of the hurricane season, according to Kottlowski.

Waters are currently cooler in the eastern Atlantic and toward the coast of Africa, but meteorologists expect that the waters will be sufficiently warm enough in that part of the basin by the peak of the season in middle to late August.

Speaking of Africa, the weather on the northwestern part of the continent will also help shape the 2022 season.

Forecasters expect strong winds over Africa to produce frequent tropical waves later in the season. These tropical waves rumble across the Sahara Desert in northern Africa and into the open Atlantic where they can become better organized into tropical depressions or tropical storms.

Kottlowski has previously said that about 85% of all tropical storm development can be linked back to tropical waves, which are areas of low pressure in the atmosphere that are typically situated north to south and move westward from Africa into the Atlantic.

Forecasters determine the overall intensity of a hurricane season by a metric known as Accumulated Cyclone Energy, or ACE, which accounts for the strength of a tropical system over its entire lifetime. In the past, a large volume of tropical storms in a season has not always generated a higher ACE value.

The 2021 season finished with an Accumulated Cyclone Energy value of 145 and 2020 had a total of 182. Both of those were extraordinarily active seasons that were above normal when measured by intensity. However, they still fall short of past seasons such as 2017 (225) and 2005 (245), according to Colorado State University figures.

AccuWeather meteorologists are projecting a total ACE in the range of 120-150 for the 2022 season. A value of 123 is considered to be normal.

Forecasters will often refer to analog years when putting together a hurricane season forecast. These data points are past seasons that featured weather patterns similar to the current and projected trends of ENSO.

Eight years bear striking similarities to this year, according to Kottlowski’s research. Several of those most recent seasons include 2021, 2012 and 2001.

Kottlowski cautioned that just because a storm hit a certain part of the United States in a previous analog year, such as Hurricane Ida in Louisiana in 2021, Superstorm Sandy in New Jersey in 2012, or Hurricane Hugo in South Carolina in 1989, there is no implication that the same areas will be struck again this year. Conversely, areas that weren’t impacted by landfalling storms in a given analog year, are not less likely to be impacted in 2022.

Based on those past landfall locations, the areas with the greatest potential for direct impacts along the mainland U.S. are the southeast Texas coast eastward through Florida, particularly the panhandle area, and the coast of the Carolinas.

One major player that is watched closely by meteorologists for determining how close to U.S. shores storms will approach — and the timing for close encounters and direct impacts — is an area of high pressure known as the Bermuda Azores high, or, simply, the Bermuda high. Forecasters say the Bermuda high’s strength, orientation and central position can essentially steer storms away or toward the U.S.

During the first part of the season, the center of the Bermuda high will likely be well west of the Azores, an island chain in the northern Atlantic. Due to this positioning, early-season storms are likely to be guided into or close to the U.S.

During the latter stages of the season, the center of this high pressure area will move northeast and over the Azores. Kottlowski’s team said this suggests more, but not necessarily all, storms could curve north and then northeastward, taking a track that moves them away from the U.S.

With the official start of the season still months away, Kottlowski is urging people to begin hurricane preparations now, particularly given the ongoing global supply chain issues along with the heightened possibility of an early storm.

“Don’t wait until June to prepare,” he said. “We’ve had preseason development over the last seven years and certainly you need to prepare now. So now’s the time to get your hurricane plan in place.”