90 Million At Risk For Severe Weather From Florida To Connecticut

Some of Thursday's severe thunderstorms include the potential for a few tornadoes.
By Alex Sosnowski March 31, 2022
Facebook
Twitter
Linkedin
Email 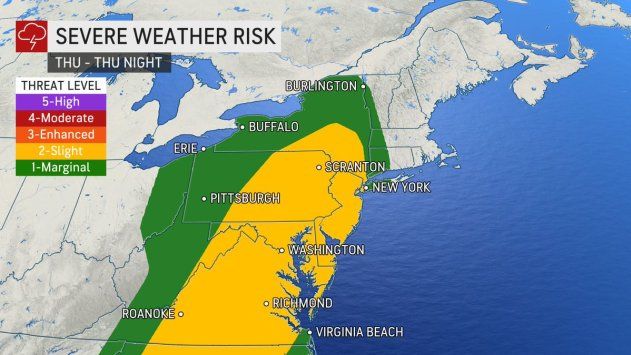 The likelihood of severe thunderstorms and the potential for a few tornadoes includes some major population centers along the Interstate 95 corridor from New York City to Philadelphia, Washington, D.C., and Jacksonville, Florida. (AccuWeather)

The same potent storm system responsible for more than 200 incidents of severe weather and dozens of tornado reports over the central United States through Wednesday night will now focus its energy on a dozen states in the East into Thursday evening, AccuWeather meteorologists warn. Some of Thursday’s severe thunderstorms include the potential for a few tornadoes.

Thus far, the strongest tornado from the current outbreak occurred early Wednesday morning in Springdale, Arkansas, and was rated as an EF3 with maximum winds of 145 mph. The storm injured several people and damaged homes and a school. Fortunately, forecasters say the storm stuck prior to the arrival of students.

The likelihood of severe thunderstorms and the potential for a few tornadoes includes some major population centers along the Interstate 95 corridor from New York City to Philadelphia, Washington, D.C., and Jacksonville, Florida.

Approximately 90 million people will be at risk of severe weather that extends along a 1,000-mile swath of the Eastern states, according to the National Weather Service’s Storm Prediction Center.

The threat zone extends as far to the west as the central Appalachians and a portion of the Great Lakes, and as far to the east as the Atlantic coastal waters from Florida to Long Island Sound.

The storms will fire ahead of and along a strong cold front that is separating May-like temperatures along the Atlantic coast from conditions more typical of February over the Midwest.

“In coastal areas of the mid-Atlantic from northeastern North Carolina to New York City and the Hudson Valley, most of the day may be free of thunderstorms with windy and warmer conditions,” AccuWeather Lead Long-Range Meteorologist Paul Pastelok said. “It may take until the evening rush hour or perhaps a bit later for any severe thunderstorm to hit in these coastal locations of the Northeast,” he added.

Temperatures were surging 30 to 50 degrees Fahrenheit higher from their January-like levels on Monday in the Northeast when snow squalls had deadly consequences along I-81 in eastern Pennsylvania. Highs in the 60s, 70s and 80s in the East will help support the severe thunderstorms as well as moisture from the Gulf of Mexico and screaming southerly winds.

The storms will bring a high risk of damaging winds that can produce AccuWeather Local StormMax gusts as high as 80 mph. At this force, trees can be toppled and power outages could be extensive in some neighborhoods.

Downpours and stiff but non-damaging winds will be most common from the storms. However, the combination of these two conditions can make for very poor visibility for motorists traveling at highway speeds. Flooding on streets and highways can also be a concern, experts say.

A small number of the storms have the potential to produce pea- to quarter-sized hail.

With so much pent-up energy continuing in the atmosphere, a few of the strongest thunderstorms could spawn tornadoes. Some of the tornadoes can be concealed by heavy rain and low clouds as they form along a solid line of thunderstorms that will advance from west to east.

A number of tornadoes occurred in this manner Wednesday and Wednesday night across the South Central states. Because of the potential concealment of some of the tornadoes, forecasters say people in the threat zone should closely monitor and react to severe weather bulletins as they are issued and not just rely on visible confirmation.

As of March 28, there have been 187 preliminary tornado reports so far this month, according to the SPC. With the more than 30 tornado reports from Tuesday and Wednesday combined, it’s likely that March 2022 will become the most active March on record for tornadoes in the U.S. once the final figures are confirmed. The existing record is 192 from March 2017.

There is also the possibility for a couple of tornadoes to form in isolated or discrete thunderstorms that are well removed from the advancing squall line. Any tornado that forms under these lone thunderstorms could be substantially strong and potentially destructive. Two pockets exist where there is a greater chance of tornadoes. One is centered in the mid-Atlantic region and the other is over northern Florida.

Where cloud cover persists through much of the day, it may be enough to limit or prevent a tornado from forming. However, storms that approach under such conditions can still become severe since they carry the risk of damaging winds.

In the wake of the cold front later Thursday night and Friday, much cooler and less humid air will sweep into the Southeast and the coastal Northeast. Across the interior Northeast, the air will again get cold enough to trigger snow showers that could lead to tricky travel, meteorologists say.