Popular regional governor said he overslept and was not in the building when it was hit.
By Joseph Golder March 30, 2022
Facebook
Twitter
Linkedin
Email 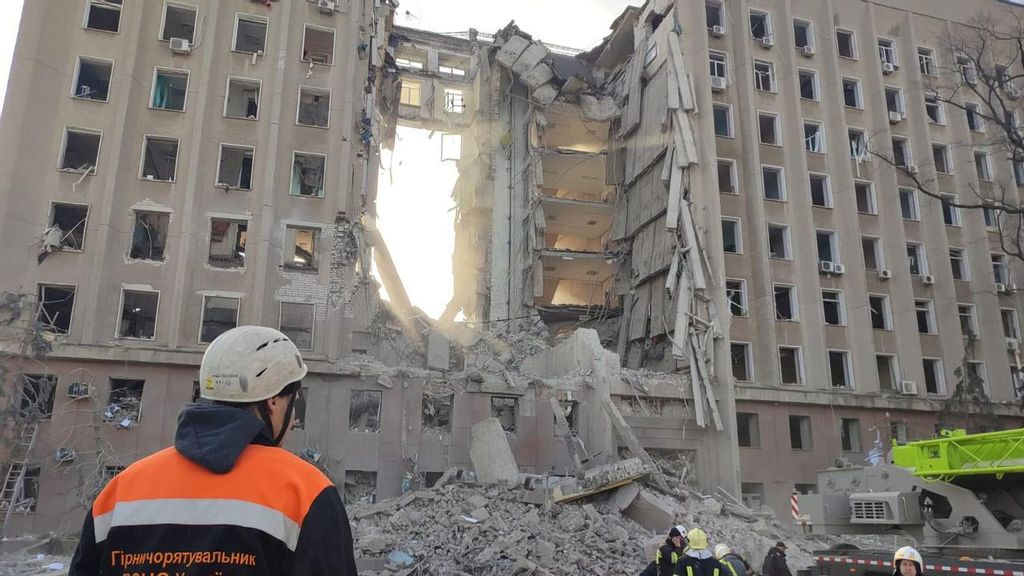 The damage done by a Russian missile strike on the Mykolaiv regional state administration building is easily apparent as rescue workers are on the scene. (State Emergency Service of Ukraine/Zenger)

Rescuers continued to sift through rubble Wednesday morning for survivors of a Russian missile strike on the state administration building, which houses the Mykolaiv governor’s office, that killed at least 12 people and injured 33 others the day before.

Images shared by the Ukrainian rescue service show firefighters dousing a nine-story building with water and removing injured and visibly shellshocked people from the ruins. A gaping hole can be seen in the building as rescuers searched in hopes of finding people alive.

One person, unclear whether alive or dead and covered in a blanket, can be seen being put into an ambulance as the footage ends.

The regional governor, Vitaliy Kim, who has been described as a local version of Ukrainian President Volodymyr Zelensky, in that he exhibits the same determination and ability to boost morale with his social media posts, was not in his office at the time of the attack.

“They hit the building of the regional administration, demolished half of the building, hit my office. Most people were miraculously saved,” Kim said in a message posted to Telegram.

“I had overslept. But, I got lucky,” he said while accusing the Russian forces of waiting until people arrived for work before firing at the government office building.

“Search and rescue operations continue after an enemy missile hit a nine-story building of the regional state administration and the destruction of the central section from the 9th to the 1st floor,” the State Emergency Service (SES) of Ukraine said in a statement released along with the footage

The SES said 38 of its employees had been working in shifts and “8 units of equipment” were involved in the rescue effort.

“As of 08:00 the work continues,” the agency said on Wednesday. “The bodies of 12 victims were removed from the rubble, 33 people were injured (of whom 18 people were rescued by SES units and transferred to ambulance crews).”

“The people of Mykolaiv posed no threat to Russia. There were no military targets in Mykolaiv,” Zelenskyy said in a video address to the Dutch parliament, the BBC reported.

The broadcaster noted that in the city of Lviv, beers are sold with Kim’s cartoon image on their packaging, “depicting him in a vest as one of seven members of Ukraine’s fight club.”

Kim told the BBC earlier in March that the Russian forces had underestimated Mykolaiv’s resistance, expecting “to be greeted with flowers” upon arrival.