VIDEO: Playing Possum: Oh Buoy Won’t Somebody Save Me?

An Australian scuba diver rescued a possum that got trapped in the Tasman Sea and was holding on to a mooring buoy for dear life.
By Lee Bullen March 30, 2022
Facebook
Twitter
Linkedin
Email 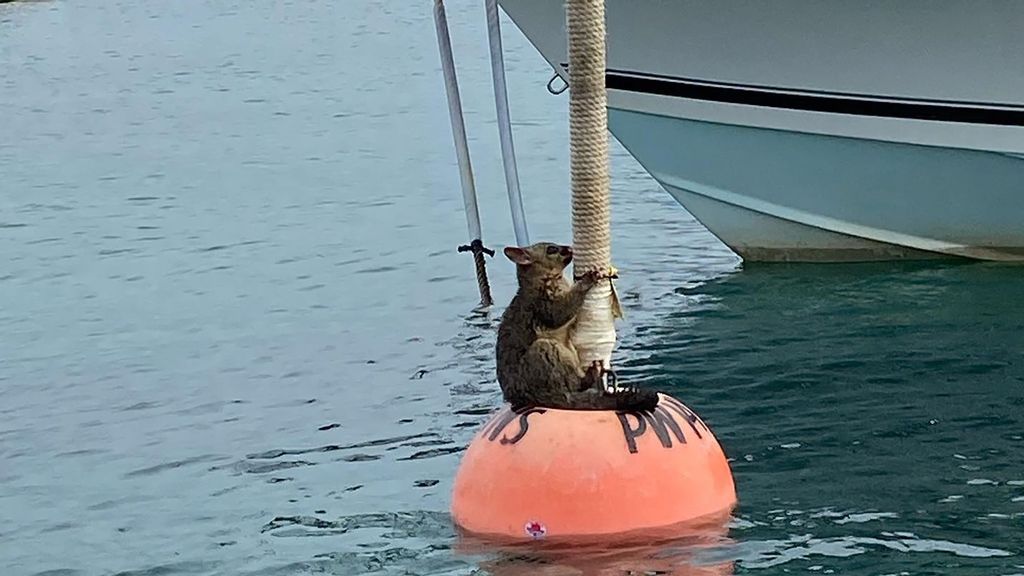 A possum that ended up stranded in the sea, clinging to a buoy, has been rescued in Victoria, Australia. (Whitecliffs Foreshore Reserve/Zenger)

A surprised scuba diver rescued a possum clinging to a mooring buoy in a busy sea harbor.

The marsupial is normally more at home in the Australian bush and forests.

But footage shows the possum hugging a buoy in the Tasman Sea before being rescued by the Aussie authorities. The rescue took place at Mornington Peninsula, in Victoria, Australia, on March 22.

“That was the first and last possum I will ever see on a mooring in Portsea,” rescuer Luke English, who operates the RedBoats scuba diving business in the town of Portsea, told Australia’s 9News. “It was hilarious.”

English, who has rescued people and animals stranded at sea in the past, said he was approached by a local resident about the trapped possum.

He remarked: “I just see that much unusual stuff, I said yep, where is it?”

The scuba instructor, who has rescued pet dogs and stranded penguins, went out to sea on a boat with two rangers from Whitecliffs Foreshore Reserve.

The rescue team headed to the possum’s location on the mooring close to the pier.

English slowly drifted the boat toward the animal, but it became frightened and jumped from the buoy into water. However, the two rangers were on hand with a fishing net to capture the possum and bring it to safety.

The animal was checked by a veterinarian on dry land and was released into the wild after being deemed fit and healthy.

According to the rescue team, the possum was probably nesting on a boat and panicked when it started sailing out to sea. So it jumped into the water and clung to the buoy.

Whitecliffs Foreshore Reserve posted on Instagram: “Early this morning, rangers responded to an unusual report of a brushtail possum clinging to a mooring buoy just off Portsea Pier.

“Luckily upon arrival, the surfboards and wetsuits weren’t needed as Luke from RedBoats was happy to assist the boys in their rescue. Whilst understandably confused, the possum appeared to be healthy and was scooped up into the net and taken aboard.”

The common brushtail possum is a social animal and keeps in contact with its group with sounds and scents. During the breeding season, it makes piercing screeches in the middle of the night to establish territories and warn of danger, according to the Australian Museum. Because the animal has adapted to urban living, it often comes into contact with people.