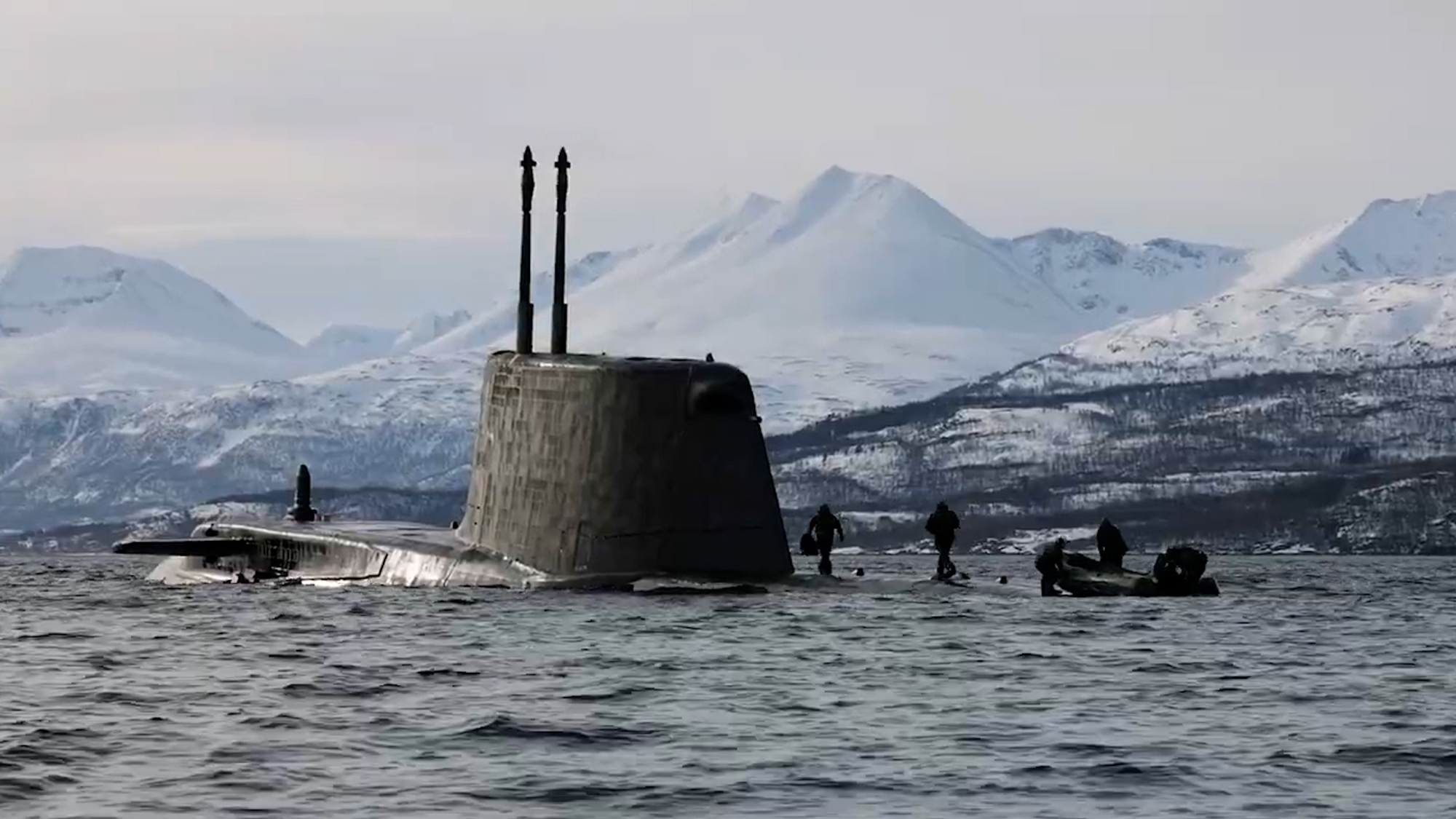 Royal Marines launched a commando raid from the Astute-class submarine seen in this screenshot from a video during Arctic exercise Cold Response 2022. (Royal Navy/Zenger)

A British Royal Marine commando launched a raid in a dinghy from a surfaced Royal Navy submarine in an exercise in Norwegian Arctic waters, a few hundred miles from the Russian border.

The images shared by the United Kingdom’s Royal Navy were filmed at the fjord of Lyngen, which lies some “three dozen miles east of Tromso deep inside the Arctic Circle,” according to a Royal Navy statement released March 29 along with the video.

The fjord is located just over 200 miles from the Russian border, and the Royal Navy said that the mock raid was carried out as part of the Cold Response 2022 exercise, the “largest winter exercise hosted in Norway in 30 years.”

The exercise comes amid heightened tensions between NATO and Russia over its invasion of Ukraine, with one unnamed member of the U.K. team quoted as saying that it was an excellent opportunity to be able to “work together to achieve a common aim.”

The Royal Navy said the footage shows the Surveillance and Reconnaissance Squadron (SRS), which is part of s Royal Marines unit, launching “small teams from an Astute-class hunter-killer submarine” as part of what it says is the largest exercise “of its kind for more than 30 years and has involved 30,000 military personnel from 27 nations” including Norwegians, U.S., Dutch, French, Italians and Germans.

The footage shows a Royal Marine in an inflatable dinghy that starts out perched on top of the surfaced British submarine, with the snowy Norwegian coast and mountains in the background.

The Royal Navy said that the aim was to conduct mock “reconnaissance missions on the rocky, icy shoreline in sub-zero temperatures while avoiding the multinational enemy’ force hunting them.

The wind can be heard blowing as the rear end of the submarine slowly descends, causing the dinghy to float on the surface unaided.

The marines can then be seen approaching land as the dinghies’ outboard motors propel them along the surface of the icy water. The British commandos return to the submarine, which moves across the surface of the water as the footage ends.

The Royal Navy said it is trained to “gather valuable information on the terrain, the enemy and suitable beach landing places for larger amphibious forces to come ashore, arriving by ski, snowmobile, boat, all-terrain vehicles, helicopter or parachute, depending on the situation and environment.”

“Being able to move sub-surface gives us a discreet means of moving our specialist teams to any coastline in the world,” the unnamed Surveillance and Reconnaissance Squadron team leader is quoted in the Royal Navy statement as saying.

“Not only can we conduct operations in isolation, but by accessing and reconnoitering these complex coastlines by small craft we can set the conditions for larger, more lethal follow-on forces,” he said.

“We used one of their larger, faster craft to access areas out of range of our small craft, an excellent example of working together to achieve a common aim.”

Commodore Jim Perks, the head of the Royal Navy Submarine Service, said that “the ability to operate undetected for significant periods of time with top-quality kit ensures that a submarine remains a formidable delivery mechanism, in this case enabling the covert deployment of the Surveillance and Reconnaissance team as showcased in the exercises off Norway.”