The researchers found that the beneficial changes varied according to electrode placement and task required.
By Georgina Jadikovskaall March 30, 2022
Facebook
Twitter
Linkedin
Email 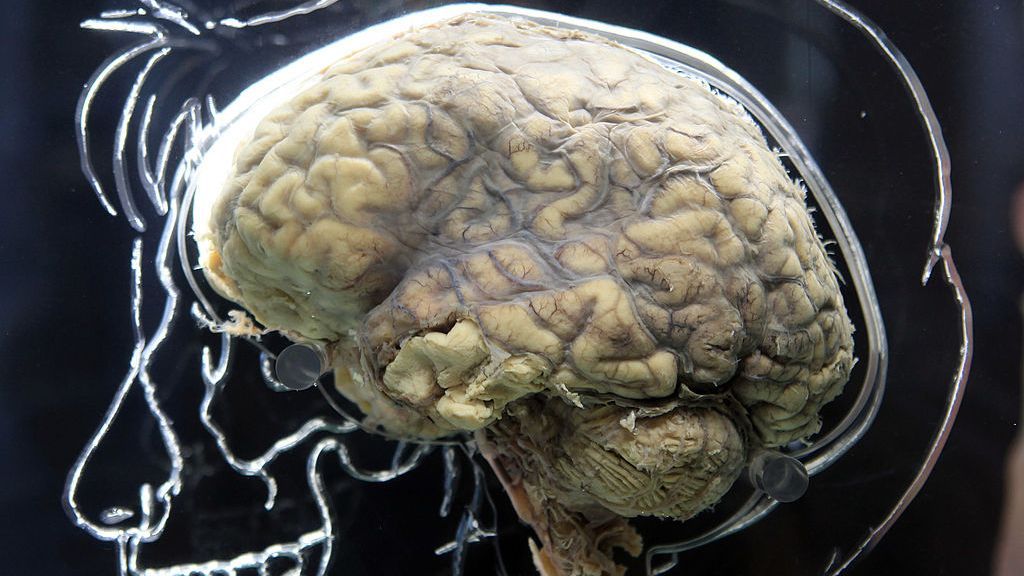 A real human brain being displayed as part of an exhibition at the @Bristol attraction in Bristol, England. Researchers are working on reducing the impact of strokes on human brains through the use of electrical currents. File photo (Matt Cardy/Getty Images)

German researchers have discovered that paralyzed stroke patients could recover significant mobility after receiving an electric current to their brains.

The therapy showed notable effects after a single application and could be individually adjusted for different patients for their optimal benefit, according to the researchers, who published their findings in the journal Brain Stimulation.

Research group leader Bernhard Sehm revealed that arm paralysis, which occurs due to physiological and structural post-stroke brain changes, is one of the most frequent consequences of brain damage.

“The basis of these changes are both reparative brain processes and behavioral patterns of everyday activities after the stroke,” said Sehm, a senior physician at the University Clinic and Polyclinic for Neurology at the University Medical Center Halle.

“With the help of transcranial direct current stimulation (tDCS), one can influence these changes in the brain. The currents penetrate the brain tissue, where they have a local excitatory or inhibitory effect.”

The study included 24 patients with “very limited” mobility due to stroke.

“In the lab, we have a robotic system that can be individually adapted to each patient — a kind of exoskeleton that enables them to move their paralyzed arm and perform tasks in a virtual environment,” said lead author Toni Muffel of the Charite-Universitaetsmedizin university hospital in Berlin.

Muffel said the patients’ scalps were stimulated through electrodes while they interacted with the virtual objects. “In parallel, we measured how well, or how poorly, the brain stimulation helped the participants to perform the tasks,” he said.

Sehm said that brain stimulation had a noteworthy effect on the brain areas affected by the stroke.

“Our robotic system allows us to measure various motor functions simultaneously and thus gain a comprehensive picture of the stimulation effects. The data show that sensorimotor functions of the paralyzed arm are clearly influenced by tDCS,” Sehm said.

“However, we could not identify a uniform beneficial pattern across different patients. Instead, the changes in the brain areas varied depending on the task and the electrode placement,” he said.

“This means that in the future, patients will need to be closely examined before brain stimulation treatment in order to develop a targeted and individualized approach to their deficits. This simple but promising method of brain stimulation will then have a future in patient care.”