Plane was a Short Stirling, which were used for mining German ports and later during the war for transporting supplies.
By Joseph Golder March 30, 2022
Facebook
Twitter
Linkedin
Email 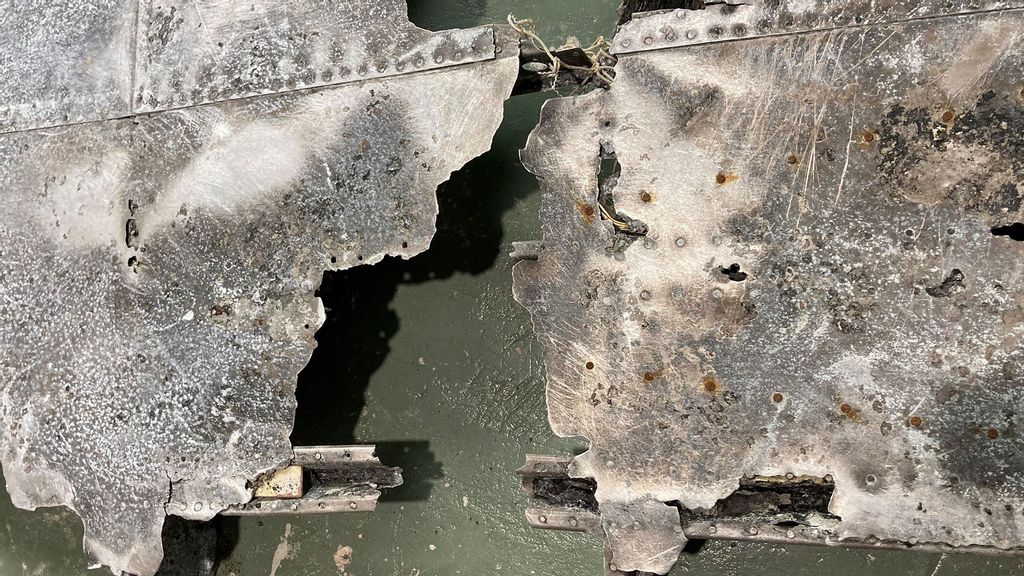 Parts of a British bomber plane known as the Short Stirling MK1 from the Second World War that washed ashore in Camperduin, Netherlands, in February 2022 are displayed. (@Egmond4045/Zenger)

The wreckage of a British World War II bomber that crashed, killing all eight crew members on board after likely being shot down by a German warplane, has washed up on a Dutch beach in what has been described as a “unique find.”

The downed bomber, identified as a Short Stirling MK1 and specifically listed as the Short Stirling BF396 airplane, as each individual aircraft had its own designation, crashed on Dec. 17, 1942.

The wreckage washed up on a beach in Camperduin, a small village in the Dutch province of North Holland, in February, but it has only now been identified as a British World War II bomber.

Short Stirlings were British bombers used for mining German ports before operating as supply carriers during the Allied invasion of Europe in 1943–1945.

“Often small pieces wash ashore, but such a large part as now is really unique,” Martijn Visser of the Egmond Foundation ’40-’45, said of the found plane wreckage. The foundation says on its website that it “wants to commit itself to the management and preservation of defense works” such as bunkers.

The foundation is based at the Bunker Museum Jansje Schong in Egmond aan Zee on the North Sea coast.

Visser also pointed out that “on wreckage pictures, you can see A.M., which stands for ‘Air Ministry.’ This was used during World War II on aircraft parts.” The Air Ministry was a British government department that oversaw the Royal Air Force from 1918–1964.

“We came into possession of some Dutch and German documents which mentioned the crash of a Short Stirling into the sea in the vicinity of Camperduin. We compared our wreckage with the only remaining fuselage of a Short Stirling in the Netherlands, and it was a 100 percent match,” Visser said.

In researching the aircraft wreckage, he learned about the Dutch airbase of Deelen, where the only known remaining hull of a Short Stirling can be seen in its museum. Visser and other researchers determined that the remains of the wrecked British bombers came from the same type of combat aircraft.

“A total of three Stirlings crashed off our coast, two near Bergen aan Zee and one near Camperduin. We are 80 percent sure that the wreckage came from the latter,” Visser said.

“They were almost home.,” Visser said of the crashed plans. “By the time you reached the Dutch coast, you were pretty safe” during World War II.

“They named the area between Castricum and Egmond aan Zee ‘the gap’ because there was little anti-aircraft artillery there,” Visser added.

The Allied invasion involved soldiers from the United States, the United Kingdom and the Free French Forces first invading Sicily and Italy, after defeating the Nazis in North Africa, before landing in Normandy on June 4, 1944, in what has come to be known as the D-Day landings, officially called Operation Overlord.