HEIST DID IT: Courtroom Confession From Gang Member In $126 Million Theft

A member of a well-known Arab crime family in Germany says he helped plan the jewelry robbery. The loot has never been recovered.
By Joseph Golder March 30, 2022
Facebook
Twitter
Linkedin
Email 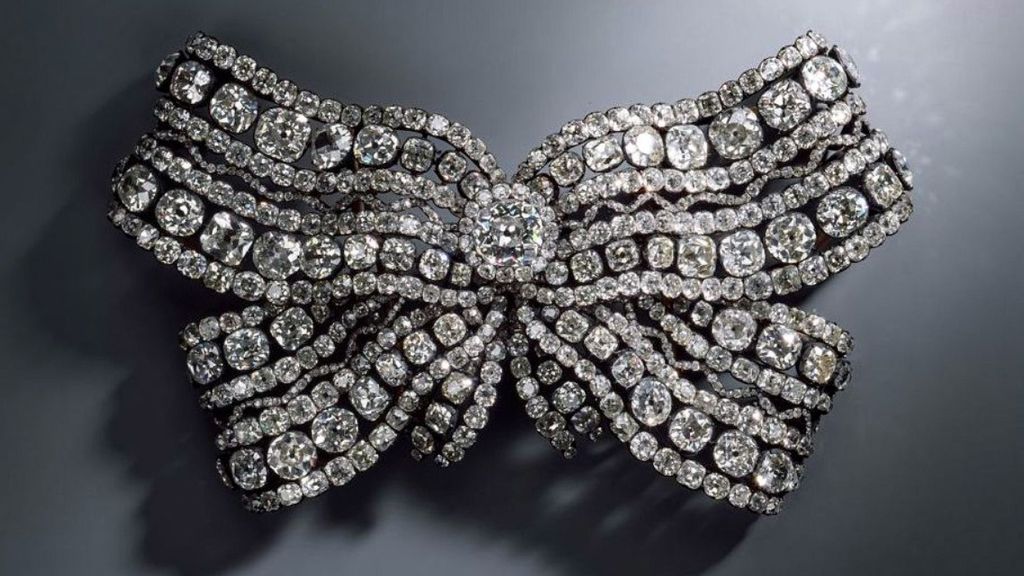 The diamond-studded large breast bow of Queen Amalie Auguste was stolen from the historic Green Vault in Dresden, Germany, in November 2019. The stolen jewels have never been recovered. (Police Saxony/Zenger)

A thief accused of stealing a diamond-studded 17th-century treasure worth more than $126 million has made a surprise courtroom confession.

The gang member — currently one of six on trial in Germany — has admitted he was involved in planning the theft of the jewelry, studded with 4,300 diamonds.

The accused thieves are said to have struck the Green Vault Museum in Dresden on Nov. 25, 2019, and more than two years later, the haul is still missing. Authorities are offering a $1.67 million “finder’s reward” for information leading to the recovery of the rare pieces.

The six come from a well-known and notorious Arab crime family in Berlin. The extended Remmo clan is believed to be behind some of the most spectacular criminal raids in Germany.

In this case, the six are accused of having stolen 21 pieces of jewelry including 4,300 diamonds and other gems from the Green Vault at Dresden Castle (Dresden Residenzschloss).

The Green Vault Museum, founded in 1723 by Augustus the Strong of Poland and Saxony, is among the oldest in the world. It is said to hold the largest treasure collection in Europe. Among the items reported to have been stolen are the 62-carat cushion-cut Dresden White Diamond and the Polish Order of the White Eagle, Poland’s highest merit award to civilians and the military dating from 1705.

Now, Rabih Remmo has admitted his involvement in preparing the burglary, according to German media, emphasizing that information about the events surrounding the theft is limited to what he himself was involved in.

But he refused to comment on the involvement of the other defendants and reportedly refused to answer questions.

In a statement read out by his lawyer, who has not been named, he admitted he first drove to Dresden on the evening of Nov. 20, 2019, in a car he had been instructed to obtain.

There, he and others climbed over the castle wall at the level of the museum to check the visibility at the entry point and the possibilities of escape.

They were checked over by a police patrol and the officers took down their personal details and found tools in the truck consistent with items that could be used in a burglary. The defendant reportedly said in his statement: “It was clear to me the matter was over, the risk seemed too high to me.” He and the others then got out, and the car drove away.

But Rabih Remmo said he was then approached shortly before the day of the heist by one of the alleged perpetrators, “who was also the main planner of the crime.”

In his statement, he reportedly said: “He asked if I wanted to take part in the burglary, saying that it was well-prepared, the plan was ingenious and the loot was significant.”

That evening, he and two others were briefed on the trip to Dresden. In the car, they talked about the burglary and the valuable jewels they were planning to steal.

The defendant said his role was to work from the street “in front of the entry window, with others, and load the loot.”

At the beginning of the trial, public prosecutor Christian Weber said the accused had stolen “unique and irreplaceable pieces of jewelry” during the burglary. The act was specifically prepared.”

According to the indictment, two of the suspects forcibly entered Dresden Castle through a window in the early morning of Nov. 25, 2019.

They then allegedly used an ax to gain access to a display case and snatched the jewels, which date back to the 17th and 18th centuries.

The security guards did not prevent the perpetrators from escaping. At the same time as the theft, there was an electrical fire near the scene of the crime, causing the street lighting to fail, before the getaway car was later set on fire in an underground parking lot.

The blaze damaged 61 other cars and injured a local resident, according to local media. The defendants face charges of theft and property damage, as well as grievous bodily harm.

Shortly after the heist, the police in Saxony offered $558,000 reward for information that could lead to the apprehension of the suspects.

At the time of the heist, police said they had enlisted 40 criminology experts to solve the case.

There is still no trace of the jewels and the trial is ongoing.