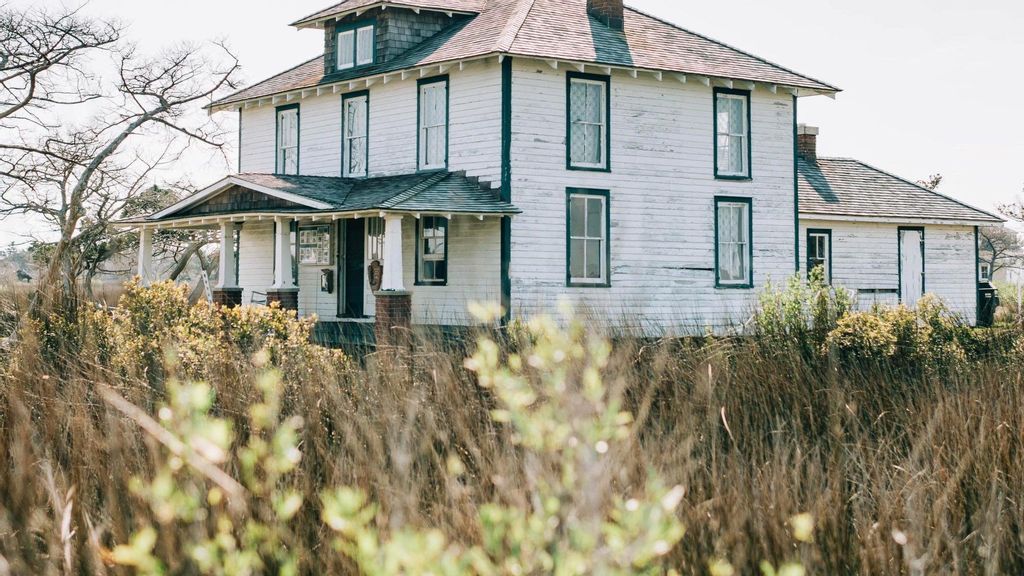 An abandoned home on the island of Portsmouth in North Carolina. (Robin Kent Pittman)

A speck of an island off the coast of North Carolina has held a special place in Robin Kent Pittman’s heart.

Quaint Portsmouth Island, located several miles west of Cape Hatteras along the Outer Banks, is essentially a small colonial village from a bygone era that’s been preserved over time. Graced with historical buildings, such as a one-room schoolhouse, a dozen, scattered clapboard cottages, a small church and a combined general store and post office, are all that’s left, serving as a reminder that generations once called this island home.

Pittman’s ancestors were among them.

“I have family connections to the island and wanted to see the village again after Hurricane Dorian left its mark in 2019,” said Pittman, also a North Carolina native who in 2021 visited the desolate, 13-mile-long island by boat with his husband and a friend who is a photographer. “We decided to explore Portsmouth over spring break because of the weather and because I wanted to see the island before another hurricane season geared up,” he told AccuWeather.

This deserted tidal island was once a bustling, populated area before severe storms ravaged it, slowly cutting through new inlets. The damage, combined with its depressed economy, forced people to flee over time.

The town was established in 1752, and within two decades, it was the largest European settlement on the Outer Banks due in large part to the shipping trade, according to the National Park Service. George Joseph Tosto, an ancestor of Pittman’s, was listed on the census around 1850 with his birthplace noted as Europe.

“Family members always said he got sick on a ship, and they left him on Portsmouth,” Pittman said. “He married then moved to mainland Carteret County, which is where our family still resides today.”

The shipping industry in and around Portsmouth Island was booming in the late 1700s and into the 1800s. Portsmouth was one of the first true bustling ports following European colonization. By 1852, nearly two-thirds of imported goods headed for North Carolina were shipped through Ocracoke Inlet, and Portsmouth Island was a pivotal stop as those goods were carried inland.

Portsmouth was well on its way to becoming one of the most populated areas of the Outer Banks – until Mother Nature had different plans for the barrier island.

In 1846, two strong hurricanes impacted Oregon Inlet and caused Hatteras Inlet, to the northeast, to deepen. Meanwhile, the wide Ocracoke Inlet was beginning to close. This made the Ocracoke Inlet a less desirable shipping location to other areas. The waters around Portsmouth’s harbor also began to become shallow, which, ultimately, led to the decline of the port.

The shipping industry was the first to abandon Portsmouth Island for larger ports in surrounding areas.

The island, which was home to nearly 700 residents by 1860, suffered another blow during the Civil War when Union soldiers came to occupy the Outer Banks. As Union soldiers patrolled the North Carolina coast, attacking its most populous ports, they targeted Portsmouth Village. Many fled the island and didn’t return after the war ended, furthering the decline of the remote island.

Occasional hurricanes sped up the island’s population decline even further, especially one hurricane season in particular. The deadly 1933 Atlantic hurricane season was one of the final blows. The record-breaking season along with the ever-changing landscape of a barrier island took a heavy toll on residents.

“I know many left the island because of storms,” Pittman said, adding that technological advances were a contributing factor, too. “The railroad system took over as the primary means of trade, and shipping by boat was becoming a thing of the past.”

By 1956, only 17 residents inhabited the island, according to the Friends of Portsmouth Island group. Due to limited supplies and jobs, that number steadily declined. Without stores and businesses, the islanders relied on goods that were brought in by private boats.

The last two residents, two elderly women who had lived in the village for decades, reluctantly left the island in 1971, leaving the village deserted ever since.

“Portsmouth Island is one of the last reminders of the resiliency of people living on the coast. You have to be prepared and work hard to live here,” Pittman said.

But for Pittman, after all these years, the island didn’t feel so desolate and eerie. In fact, it was quite the opposite.

“I will be honest, the island felt like home to me. Something was comforting about the tidal marshes, live oak trees, white-washed cottages and marsh grass,” he said.

“My favorite part of the day was sitting on a porch of the first yellow house and just listening,” he recalled. “No noisy AC units, no cars.”

In fact, he recalled, there were hardly any sounds. “Just the creaking of a screen door and the faint sound of the ocean in the distance,” he said.

His travel companions, on the other hand, felt differently.

“At one point, they said this was the start of a box office-topping thriller-horror film,” Pittman said of his husband and photographer friend.

The entire time they explored the island, he said, they only saw one other visitor in the village, also a photographer.

Yet as preserved a colonial setting as it may be, the scars of hurricane damage are still visible on the historic structures.

“The first house we explored was lovingly repaired on the outside. It had new siding, paint and trim,” he said. But there were some remnants of damage in the interior, with a clear watermark throughout the house. It appeared that the water line came up about 18 inches high or so. “Other than the watermark, the house was in great shape,” Pittman explained.

Beadboard paneling and solid wood floors held up well in the storm surge, and they were left clean without a speck of mold, but Pittman said other homes were completely boarded up and not safe to enter.

“The post office/general store had the most telling sign of storms with a wall labeled in Sharpie marker of the high-tide lines of all recent storms,” Pittman said. Some of the infamous names written on the wall included Hurricane Isabel from 2003, Hurricane Ophelia from 2005 and Hurricane Sandy from 2012, among others.

“I’ve lived in Carteret County my whole life, and we always regarded Isabel as the highest. Dorian shattered those records but only on Ocracoke and Portsmouth … It’s never been that high before,” Pittman said.

Other signs of significant damage can be seen across the island. Major storms had washed away all water cisterns along with picket fences — and access was limited by some of the most recent storm effects.

“You can no longer drive or take an ATV to the village because Dorian opened up inlets on the beachfront road,” Pittman said.

“I’m amazed at those homes still standing after weathering storm after storm,” Pittman said, adding that the remaining cottages “for the most part, are sturdy and ready to withstand high winds. Storm surge, on the other hand, could eventually take out those old homes.”

As the island’s remaining buildings started to deteriorate, officials established the Cape Lookout National Seashore (CLNS) in 1976, so old structures that had been left to the elements could be refurbished.

Today, the National Park Service continues to maintain the few remaining facilities, so visitors who tour the island can feel like they’ve gone back in time. Also, people can support organizations like the Friends of Portsmouth Island that help keep the village maintained.

Pittman encourages tourists to visit this little gem of an island, which has started making online lists of off-the-beaten-path islands to explore.

“Please go out and see it. I would recommend anyone visiting the area to plan a day trip and see it before it’s too late,” Pittman said. “It only takes one more bad [storm] before we lose Portsmouth Island Village. I’m worried the new inlets on the Oceanside will only make it easier for storm waters to enter.”