What Are ‘Discrete Cell’ Thunderstorms?

They sometimes develop into a "supercell" thunderstorm that can contain a tornado.
By Zachary Rosenthal March 29, 2022
Facebook
Twitter
Linkedin
Email 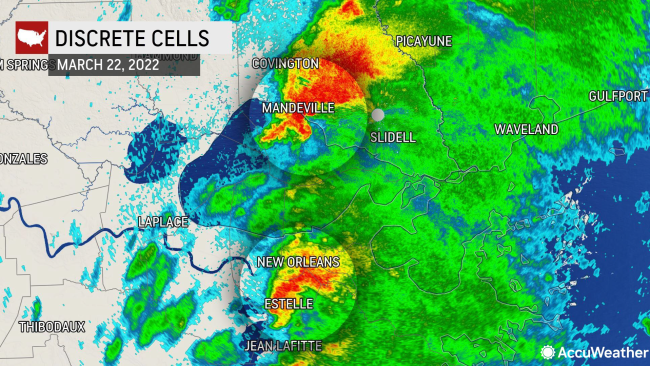 Discrete cells form on their own, allowing them to grow and mature without competing with other storms for space and energy. (AccuWeather)

During outbreaks of severe weather, AccuWeather meteorologists look for “discrete cell” thunderstorms outside of a line of storms, in order to identify cells that could produce large hail and strong tornadoes. But, what exactly are discrete cells?

According to AccuWeather Chief Broadcast Meteorologist Bernie Rayno, discrete cells are storms that form on their own, allowing them to grow and mature without competing with other storms for space and energy.

“They’re not part of a line, so they are not having to compete with other thunderstorms,” Rayno explained. “In a sense, they are able to draw in the environment around them to become stronger.”

As a result, they can develop into a “supercell” thunderstorm that can contain a tornado.

The two twisters that tore through the New Orleans area in March 2022 were formed by discrete supercells that developed off the tail end of the squall line. One of the storms, which struck the suburb of Arabi, Louisiana, was rated an EF3 tornado, a sign of the power that a discrete thunderstorm can possess. Tornadoes are rated on the Enhanced Fujita Scale, which replaced the original Fujita Scale in 2007. Tornadoes on the EF Scale are can have ratings as low as EF0 or as high as EF5.

Supercell thunderstorms can produce the world’s most powerful tornadoes, such as the highly destructive 2011 Joplin tornado or the 1999 Oklahoma City tornado, which were rated EF5 and F5 tornadoes, respectively.

When a supercell is in the process of forming a tornado, it often forms a hook echo, which can become very prominent on radar in the area of the storm that can spawn a tornado.

Inside of the hook echo, the tornado can be found on the ground, and meteorologists today are able to all but confirm the presence of a tornado within a supercell if dual-polarization radar identifies debris lofted into the air, a phenomenon known as a “debris ball.”

“This signature, known as a Tornadic Debris Signature (TDS), [is] a powerful tool, particularly in very rural areas where we might not otherwise receive confirmation that a tornado is doing damage for several hours. Once a TDS appears, a tornado is already doing damage,” the National Weather Service explained.