Warmup To Bring Return Of Severe Weather To Mid-Atlantic, Northeast 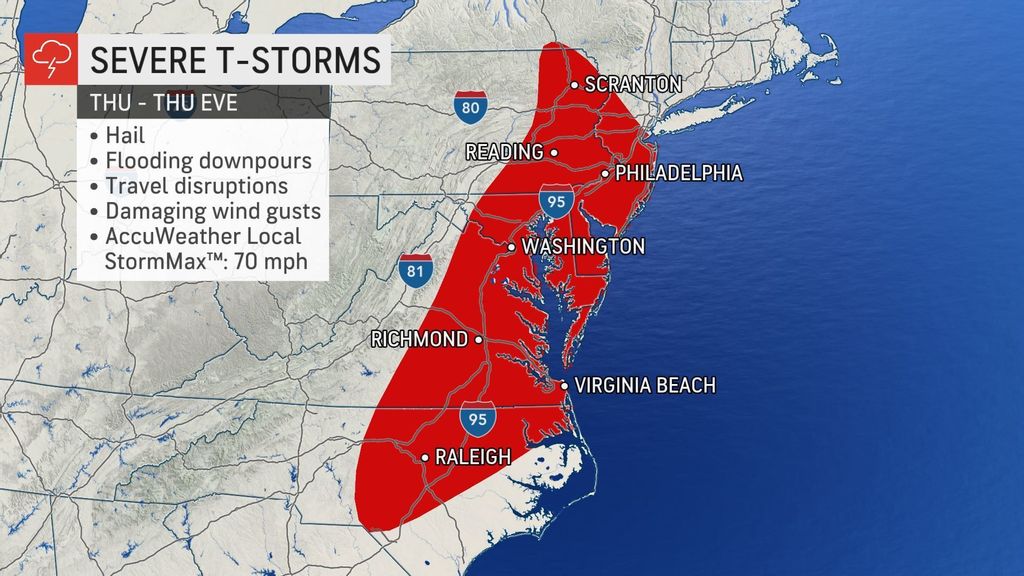 As thunderstorms develop along the eastern slopes of the Appalachians, locations from North Carolina to Pennsylvania and New Jersey will be the most at risk for severe weather through Thursday evening. (AccuWeather)

A topsy-turvy weather pattern has brought everything from record-breaking warmth to late-March snow squalls to the Northeast over the past week. AccuWeather meteorologists say this theme will continue in the coming days as incoming warmth helps trigger a round of severe weather for the region.

The same storm and cold front expected to unleash an outbreak of severe weather across the central and southern United States through Wednesday night will continue shifting eastward Thursday.

Thunderstorms will linger in parts of the Southeast and Ohio Valley Thursday morning before eventually spreading from the Florida Gulf coast up through the Northeast.

AccuWeather forecasters expect localized severe thunderstorms to fire up across parts of Florida, Georgia and South Carolina, and those storms could bring the threats of small hail, gusty winds and flash flooding.

AccuWeather Meteorologist Dean DeVore explained that following the departure of cold air, an upcoming temperature swing could help produce a higher concentration of severe weather reports in that region.

“The warm, moist air that will be drawn up ahead of the approaching front on Thursday will help to provide the atmospheric ingredients needed for some strong to severe thunderstorms to fire,” said DeVore.

As thunderstorms develop along the eastern slopes of the Appalachians, locations from North Carolina to Pennsylvania and New Jersey will be the most at risk for severe weather through Thursday evening. Residents in cities such as Raleigh, North Carolina, Washington, D.C., and Philadelphia should all remain alert.

In addition to flooding downpours, hail and damaging winds are expected in this zone, with an AccuWeather Local StormMax™ of 70 mph possible.

Motorists along highways such as along portions of interstates 64, 76, 81, 85 and 95 should remain on alert for downpours that can bring ponding on the roadways as well as periods of reduced visibility that can lead to slower travel times.

Thursday’s severe weather risk will also include the same portion of Interstate 81 in northeastern Pennsylvania that was shut down Monday, when a fatal multi-vehicle pileup occurred amid a heavy snow squall.

While the greatest risk for severe weather is expected to remain south and west of New York City, the area could still experience some gusty winds and heavier downpours late Thursday afternoon into Thursday evening.

Across the rest of the Northeast, wet weather is forecast to spread from the Great Lakes to the New England coast through Thursday and Thursday night. A brief warmup will accompany the wet weather as March comes to an end.

After Arctic air ushered in cold more typical of January early in the week, high temperatures in the 70s are forecast Thursday in places such as Philadelphia, while New York City is expected to record a high in the upper 60s.

Those along the Eastern Seaboard should not get used to the mild, typical-spring weather, however. AccuWeather long-range forecasters are predicting more abnormally chilly air to return to the Northeast in early April as another big dip in the jet stream approaches.