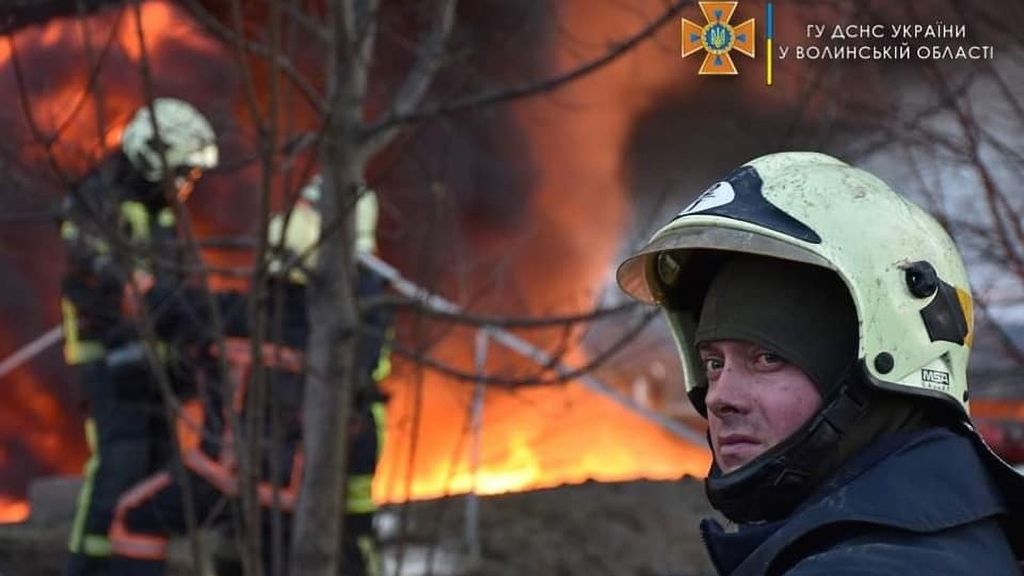 Firefighters battle a blaze that broke out in Lutsk, Ukraine, as a result of the Russian military's shelling of industrial fuel storage tanks in late March 2022. (@MNS.GOV.UA/Zenger)

Ukrainian firefighters have been battling several massive blazes during the past few days at oil depots hit by Russian missiles in an apparent attempt to starve the country of fuel and to create an oil and gas scarcity.

Images shared by the State Emergency Service (SES) of Ukraine on March 28 show large flames dwarfing firefighters aiming hoses at the inferno, where huge fuel containers in the city of Lutsk can be seen severely damaged and burning.

Lutsk, a historical city and the capital of the Volyn region, in northeastern Ukraine, is about 95 miles from Lviv, where a huge fire at an industrial fuel storage depot started at about 4:30 p.m. local time on March 26 and was not fully extinguished until 7 a.m. the following morning.

Footage from the emergency workers in protective gear in Lviv also showed them tackling flames in the towering inferno during the 13-hour operation.

There are also new concerns regarding the nuclear reactor at Chernobyl, with Ukraine’s Deputy Prime Minister Iryna Vereshchuk demanding that the United Nations Security Council immediately demilitarize the area.

She said on Sunday that Russian forces are a threat “not only to Ukraine but also to hundreds of millions of Europeans” for taking large quantities of old and poorly maintained artillery to the area.

The Chernobyl nuclear plant suffered what is considered the worst nuclear accident ever in terms of casualties and costs on April 26, 1986. Two engineers were killed by the explosion, and dozens of others were said to have later died due to the radiation exposure from the reactor blast over the next decade.

Russia announced on Tuesday that it will “drastically reduce” military combat operations around the Ukrainian capital, Kyiv, and the northern city of Chernihiv “to boost mutual trust” in peace talks.

During the talks in Istanbul, Turkey, Ukraine proposed becoming a neutral state in exchange for security guarantees.

Ukrainian negotiator Oleksandr Chaly said that his country’s offer of neutrality was a chance to “restore the territorial integrity and security of Ukraine through diplomatic and political means.” Ukraine’s aim was to “fix its status as a de-facto non-bloc and non-nuclear state in the form of permanent neutrality,” he was quoted saying by the BBC.

“This is not a ceasefire, but this is our aspiration, gradually to reach a deescalation of the conflict at least on these fronts,” Moscow’s lead negotiator in talks with Ukraine, Vladimir Medinsky, said in an interview with the state-run TASS news agency.