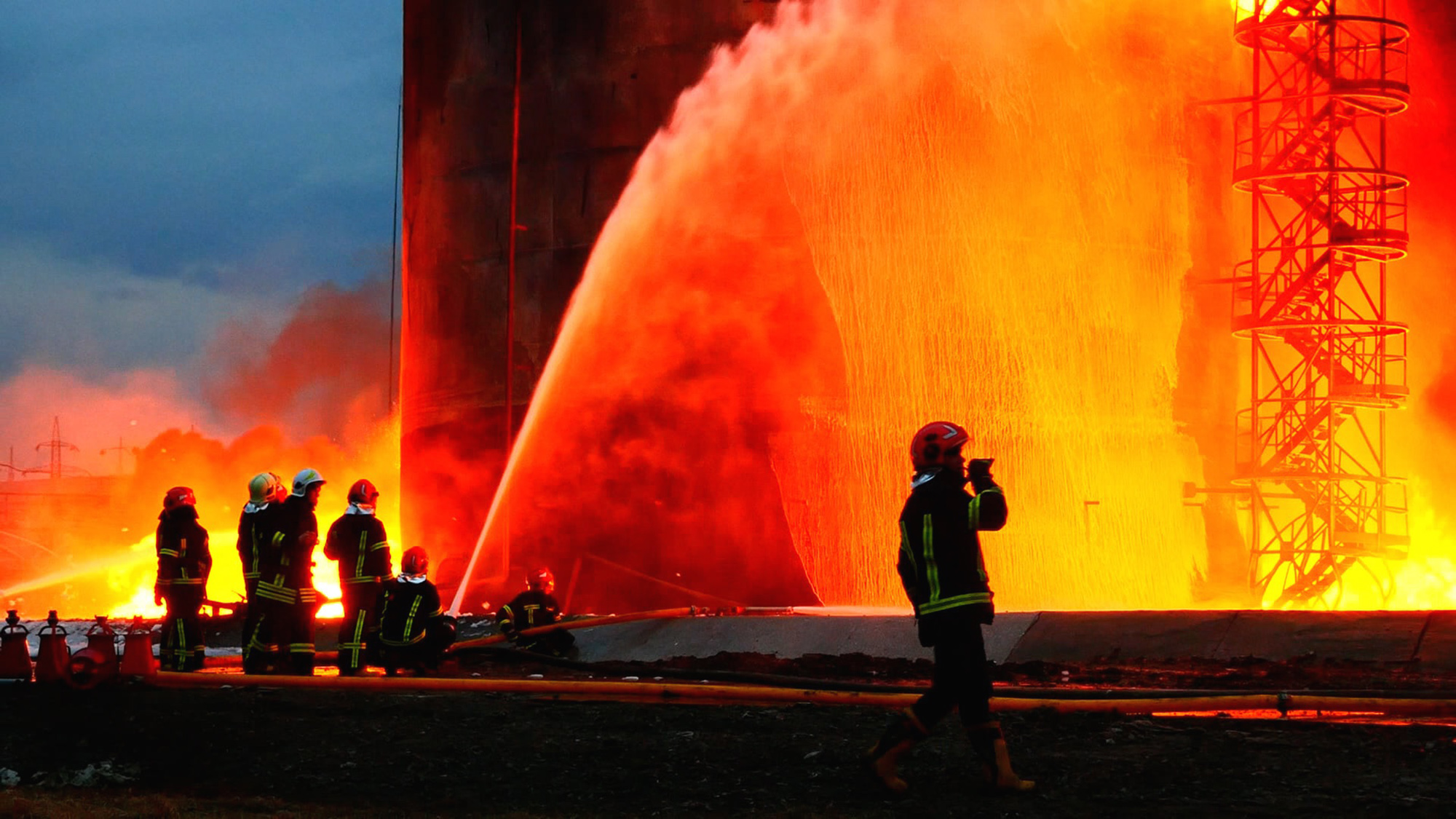 Ukrainian firefighters battled for hours a huge fire that broke out in an industrial fuel storage facility in Lviv, Ukraine, as a result of Russian shelling on March 26, 2022. (@MNS.GOV.UA/Zenger)

Dozens of Ukrainian firefighters staged a round-the-clock battle to halt a massive blaze at an industrial fuel facility in the western city of Lviv after it was hit by Russian artillery.

“Around 4:30 p.m. on 26th March, a fire broke out in Lviv as a result of shelling on the grounds of one of the industrial fuel storage companies. At 5:02 a.m. on 27th March, the fire was contained. At 6:40 a.m. it was extinguished,” the State Emergency Service (SES) of Ukraine said in a statement on March 28, 2022, as it released footage of the flames and the seemingly tireless firefighters trying to extinguish them.

Russian rockets also damaged a school in Lviv, and the head of the Lviv Regional Military Administration, Maksym Kozytskyi, said that according to preliminary data, five people were injured in two missile strikes, and the threat of a missile strike remains, Ukraine’s TCH25 reported.

During the early weeks of the war, Lviv remained a relatively safe stopover for Ukrainians fleeing the cities farther east, on their way to neighboring Poland and other countries.

Despite the missile strike, Lviv businesses reopened the next day and people seemed to go about their lives as usual, shopping and visiting outdoor cafés.

Lviv is about 43 miles from Ukraine’s border with Poland, a NATO-member country that U.S. President Joseph R. Biden Jr. visited on Friday and Saturday.

On Saturday, Biden visited with Ukrainian refugees at Warsaw’s PGE Narodowy stadium. Afterward, Biden was asked by reporters what seeing the refugees makes him think of as he deals with Russian President Vladimir Putin. Biden responded: “He’s a butcher.”

The head of Ukraine’s Defense Intelligence Agency said Russia’s operations around the capital  Kyiv had failed and that it would be impossible for the Russian army to overthrow the Ukrainian government. The Russian military, he said, is now focused on the south and the east of the country, CNN and other media reported on March 27.

“There is reason to believe that he is considering a ‘Korean’ scenario for Ukraine. That is, [Russian forces] will try to impose a dividing line between the unoccupied and occupied regions of our country. In fact, it is an attempt to create North and South Korea in Ukraine,” Brig. Gen. Kyrylo Budanov said.

He said he expected the Kremlin to try to unite all Russian-occupied territories in Ukraine into a single entity.