Sixteen-year-old Riley Leon was driving home from a job interview when he found himself in the middle of a strong tornado.
By Zachary Rosenthal March 29, 2022
Facebook
Twitter
Linkedin
Email 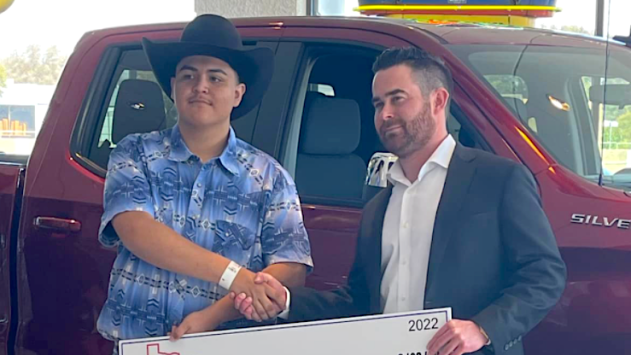 The teen who accidentally piloted his red 2004 Chevrolet Silverado into a destructive EF2 tornado that struck Elgin, Texas, was given a brand new truck and a large check to boot.

Sixteen-year-old Riley Leon was driving back home from a job interview at Whataburger when he accidentally found himself in the middle of a strong tornado. As the car was engulfed by the funnel, debris kicked up by the storm pelted his vehicle, with the storm’s strong winds flipping the car on its side and spinning it a full 360 degrees before miraculously flipping it back on all four wheels and allowing Leon to drive away all but unscathed.

“I was mostly worried about my truck honestly,” Leon said, according to reporting from NBC Dallas/Fort-Worth. “I didn’t care about myself at that point. It left me speechless seeing how my truck was.”

Photos of the truck show the extent which the storm pummeled the vehicle. Dozens of scratches and dents blanket the entire driver side of the red truck, while a basketball-sized indentation was visible just behind the backseat door.

While Leon was calm and collected while retelling the frightening story, his encounter with the tornado did make him realize how lucky he is to be alive.

“I am very grateful,” said Leon. “This doesn’t happen to a lot of people, and it happened to me.”

Leon, wearing a black cowboy hat, accepted the new truck during a photo op Saturday at a local car dealership, which donated the vehicle to the teen.

Still, much of Leon’s focus is dedicated to his old truck. Despite being gifted a brand new red 2022 Chevy Silverado by the Fort Worth-based Bruce Lowrie Chevrolet Dealership, fixing up the old truck is important to Leon, who says that the truck has been owned by his family for more than a decade and was passed down from his father.

“It’s my truck,” said Leon. “I cannot let it go. It has a lot of sentimental value to me.”

The dealership also gifted Leon and his family $15,000 to spend however they like. Leon’s story also resonated with Americans across the country, leading more than 1,200 people to come together and raise more than $40,000 for Leon’s family on the fundraising platform GoFundMe.

The fundraising campaign was started by Leon’s school nurse, who says that he has started experiencing severe back pain following the scary incident, which has given him newfound fame at his school.

And as for his newfound fame among his peers? The teenager said the viral incident brought on a new nickname.

Despite the influx of cash and support, Leon still is set to start his job at Whataburger this week.