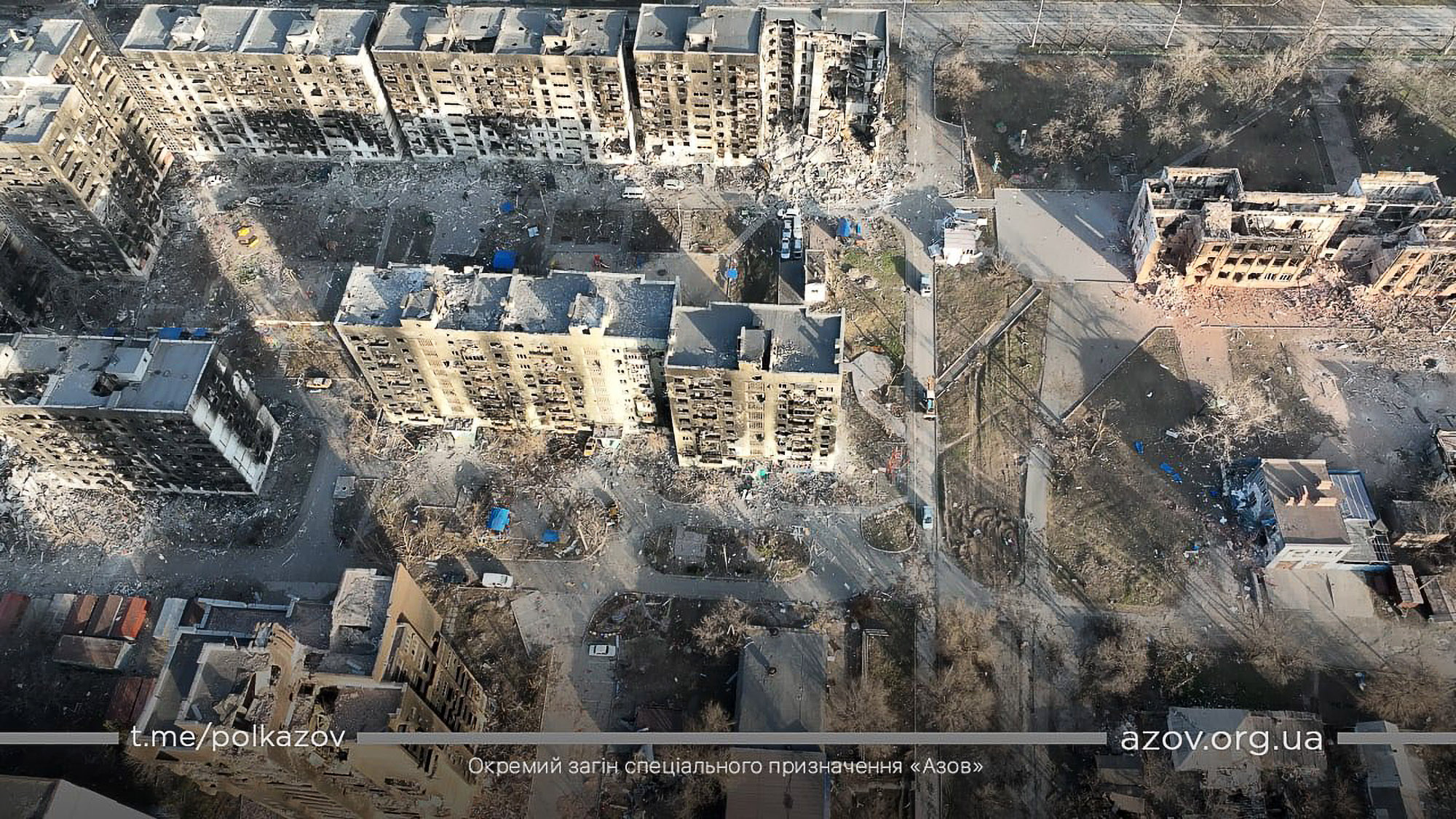 The Azov Regiment, a unit of Ukraine's National Guard, released new photos showing the damage and destruction done to the city of Mariupol in the war with Russia. (@Polk_Azov/Zenger)

Graphic images and haunting words shared on social media capture the devastation wreaked upon residential buildings in the Ukrainian city of Mariupol, where about 170,000 people reportedly remain without adequate access to food, water or medicine.

In an almost lyrical Twitter post, the Azov Regiment, part of the National Guard of Ukraine, speaks for the war-ravaged city by the Sea of Azov: “Hi there. I am your Mariupol. The enemy knocked out my glass eyes,” the post begins.

“Do you see blackened walls? He burned my body.

“He breaks me to pieces — brick by brick, because he is looking for my soul. My people.

I close them as best I can.

They say I’m a fortress.”

The message’s closing words follow — “I hold on while they fight for me. I have to endure.”

But sentiments expressed can’t mask the harsh realities in a war-torn place Ukrainian President Volodymyr Zelensky has designated a “hero city” along with some others hard hit by the Russian invasion of Ukraine now in its fifth week — Kharkiv, Chernihiv; Kherson; Gostomel and Volnovakha.

Nearly 5,000 people have been killed in Mariupol since the war began, Reuters reported a spokesperson for the city’s mayor saying on Monday. According to the spokesperson, about 90 percent of buildings in the city had been damaged and about 40 percent had been destroyed.

United Kingdom Prime Minister Boris Johnson and Zelensky discussed the “appalling humanitarian situation” in Mariupol in a phone call Monday with the prime minister “reiterating that the U.K. would maintain and strengthen economic pressure on Russia, a Downing Street,” according to a statement from the prime minister’s office.

“The prime minister offered his full support to Ukraine in the face of Russia’s continued aggression, including with humanitarian support and more defensive equipment,” the statement said.

The Russian Armed Forces failed to take Mariupol quickly due in large part to the strength and resolve of the Ukrainian resistance, which includes the Azov Regiment.

Mariupol’s deputy mayor Serhiy Orlov told the BBC that some people in the city “are dying from dehydration and lack of food; some are dying from lack of medicine, insulin.”

Civilians are still trying to evacuate, and Ukraine has accused Russia of forcibly transporting residents to Russia.

Ukrainian Deputy Prime Minister Iryna Vereshchuk indicated in a Telegram post that three humanitarian corridors were agreed to open on Tuesday, one of which leads from Mariupol to Zaporizhzhia in the country’s southeast.