The dog and its owner were swept into the swollen L.A. River, and rescuers were called after the pair got caught in the current.
By Zachary Rosenthal March 29, 2022
Facebook
Twitter
Linkedin
Email 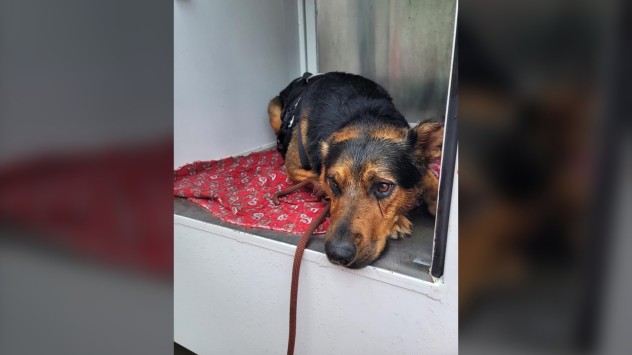 Scooby was rescued by the LAFD on March 28, 2022, after becoming trapped in the L.A. River. (Los Angeles Animal Services)

A dog, his owner, and a good Samaritan all had to be rescued from the Los Angeles River on Monday after the drought-stricken city picked up its heaviest rainfall of the year so far, more than enough to cause the river to swell.

The dog and its owner were swept into the swollen river at around 2:00 p.m., and rescuers were called to the scene after the pair got caught in the river’s strong current. More than an inch of rain had been recorded at Los Angeles International Airport, according to the National Weather Service.

The owner was able to be rescued, but she had to let go of her dog, a large German Shepherd named Scooby, to grab the rescue ring. After that, the attention of the firefighters, and the attention of bystanders and the city of Los Angeles, focused on Scooby.

As the dog battled against a strong river current that reached speeds of 5-10 miles per hour, the scared pooch fought off not one, but two rescue attempts. Scooby shook off the first rescue attempt from firefighters and began swimming downstream. The dog’s journey downstream was captured and aired live by KABC’s chopper cam, leaving viewers glued to TV screens and internet live streams.

The dog was able to walk along the shallower edges of the river, but had trouble standing in the deeper sections of the drainage canal, leaving the chopper operator concerned when the dog seemed to fall into the middle.

Nearly an hour after rescuers were first called to the scene, a good Samaritan leaped into the dirty, rushing river and managed to grab ahold of Scooby. Other bystanders, many of whom had been watching the rescue from bridges that crossed the river, managed to toss the pair a rope, according to reporting from KABC.

#LAFD is STRONGLY asking ALL bystanders to stay OUT of the #lariver as we continue our efforts both from the ground and the air to rescue the dog. By going in the water you are created another human rescue which puts all at risk…including yourself. Please. Stay. Out.

However, the dog ended up biting the would-be-hero in the hand and escaped, leaving the 28-year-old man to be rescued by firefighters and taken to the hospital without having rescued the pup. The rescue attempt prompted the Los Angeles Fire Department to ask people to stay out of the river.

About an hour later, as the waters of the river became shallower, fire department rescuers managed to lasso Scooby and pull him from the river.

The surely grateful dog was reunited with its owner, who was hospitalized with minor injuries resulting from the scary ordeal.