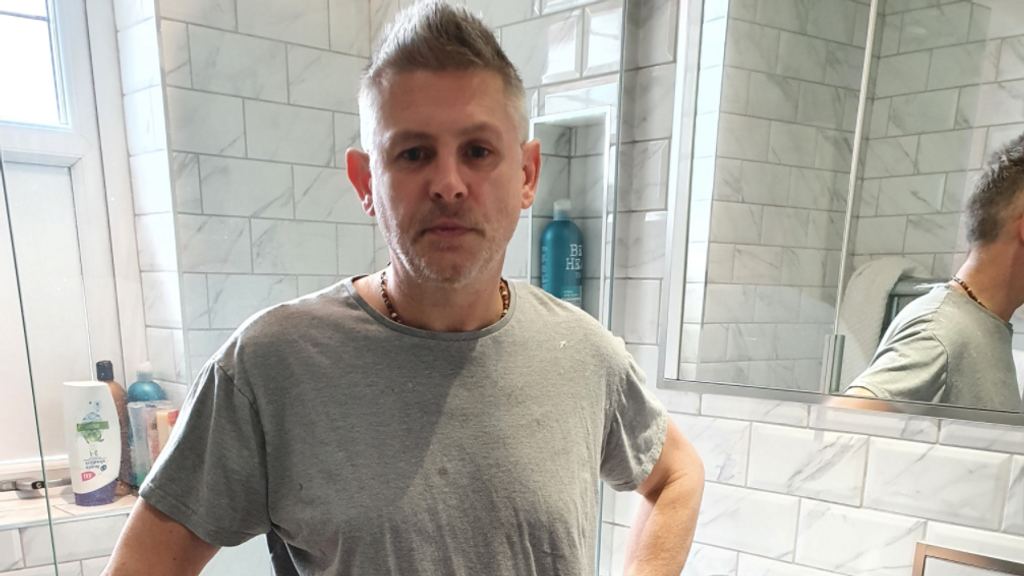 The plumber who landed a record deal after singing while he worked on a music boss's bathroom is having a Hollywood movie made about his life. (Steve Chatterley/Zenger)

A plumber who landed a record deal after being heard singing while he worked on a music mogul’s bathroom is having a Hollywood movie made about his life.

Kev Crane secured himself the life-changing music deal after singing along to the radio as he worked at the home of record producer Paul Conneally.

The 50-year-old spent six weeks installing a new bathroom completely unaware Paul was a music boss — until he offered him a new job.

Kev went on to make a 1980s influenced album under the label New Reality Records and it proved so successful he is releasing a second record in April.

His dramatic rise to stardom has also now seen L.A.-based film producers get in touch to get the rights to his story, which first hit the headlines last September.

Award-winning writer and director Stacy Sherman and American screenwriter and producer Billy Ray are now working on the screenplay about Kev’s life.

Ray wrote the 2012 blockbuster “The Hunger Games” as well as the latest installment of the Terminator franchise “Terminator: Dark Fate” in 2019.

Meanwhile, a script has been written by legendary British sitcom and film writers Dick Clement and Ian La Frenais.

The pair is behind hit comedies including “The Likely Lads,” “Porridge,” “Auf Wiedersehen,” “Pet” and “The Commitments.”

Kev says the last six months have been a complete whirlwind as he continues to juggle fitting bathrooms in the East Midlands while working as a singer.

And for the upcoming film, which is due for release in two years, Kev and Paul say they would like to be played by British comedy duo Simon Pegg and Nick Frost.

Kev, who lives with wife Karen in Quorn, Leicestershire, said: “It’s like I’m watching this happen to someone else.

“Not for one minute did I think this could happen to me.

“I’ve had some sleepless nights thinking about this whole story — the record deal and now the film. It’s so exciting.

“We grew up watching shows like ‘Porridge’ and ‘Auf Wiedersehen’, ‘Pet’ along with films like ‘The Commitments’.

“So it feels unreal to be now working with the creators of those and having Zoom calls with them in LA and to think it’s our story that they’re working on.

“My wife has been so overwhelmed by it all — in tears about it. I am just going with the flow.”

Kev used to be in a cover band called “The Reprise” in 1990s covering bands like Depeche Mode, as well as writing his own music.

But after two unsuccessful auditions for Fame Academy and Stars in Their Eyes in the early 2000s, he decided to give it up.

But his big break came when he got a call from Paul for a quote to fit some bathrooms at his house last year.

Kev added: “I started work at Paul’s house and I like to sing while I am working and he pulled me into the living room one night for a conversation about my singing voice.

”I started telling him that I love music and I used to be in a band and that I had written an album — more of a hobby really.

“I was shocked when he said he wanted to hear it. He later pulls me into his office and told me, to my surprise, that he really liked my album.

Paul, 62, of Loughborough, Leicestershire, said he noticed his plumber had a “good voice” as he sang along to the radio to the likes of Meatloaf and David Bowie.

He added: “Never in a million years did I think this would happen when I first heard Kev singing.

“It’s been a sharp learning curve for us both but the team in L.A. are so supportive.

“We know the story won’t follow our life stories exactly but will be based on it and we can’t wait to see exactly what they do with it.

“We’re learning just how much work goes into the making of a feature film, especially one made in L.A.”

“Not because they look like us but because like Kev and I, they work well together and they’re English.”

Kev added: “Other names suggested by various people we are working with include Jude Law, Colin Firth, Jason Statham and Ricky Gervais.”

U.S.-based writer, producer and director Stacey said: “This is a story about the human spirit and music.

“What could be better? Sinks fixed, dreams dashed, heartache, hope and U.K. music.”