“I can trace working with plants and herbs directly through these women,” says the entrepreneur.
By Lem Satterfield March 29, 2022
Facebook
Twitter
Linkedin
Email 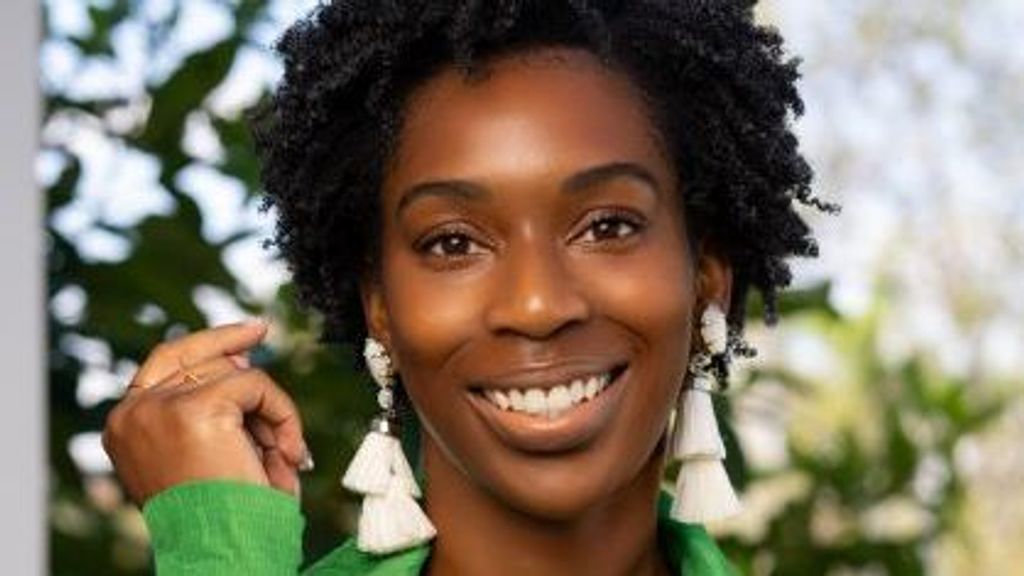 Makuyo chose the name Siika for her products as an homage to wealth in terms of culture, tradition and rituals. “As a communal people, rituals are what Africans and Indigenous Americans cherished before colonization. It’s what connected us. (Courtesy of Makuyo)

Healing is a gratifying nectar to Makuyo, for whom honey serves as the foundation of  SIIKA Herb + Honey Co. A devotee to the thick, golden liquid’s “vast healing properties,” Makuyo is a creative alchemist who believes “infusing herbs with honey allows us to signify that healing can be so sweet.”

Makuyo is named after her Ghanaian paternal grandmother, who shares the traditional Krobo name. The creator named her four herb-infused honey products in honor of her family matriarchs.

“I can trace working with plants and herbs directly through these women,” said Makuyo, a well-traveled entrepreneur with a bachelor of science in computer engineering from North Carolina A&T and a master’s of science from The George Washington University.

“Siika translates to ‘wealth, luxury or riches.’ I chose the word Siika as an homage to wealth in terms of culture, tradition and rituals. Makuyo, meantime, is my preference — no middle name, initial or last name. I choose to go by that single name because it’s unique enough.”

Zenger: What is the significance of the name, SIIKA?

Makuyo: My brand is SIIKA Herb + Honey Co.  In my paternal Ga language, Siika translates to “wealth, luxury, or riches.” Beyond monetary wealth, I choose the name Siika as an homage to wealth in terms of culture, tradition, and rituals. As a communal people, rituals are what Africans and Indigenous Americans cherished before colonization.

It’s what connected us to ourselves, our families, our ethnic groups and our environment. And so, SIIKA creates herb and honey infusions that intersect taste and tradition, so you can honor your true nature, true wealth and true rituals.

Zenger: What is its makeup?

Makuyo: The tisanes (herbal teas) are named after and inspired by the African continent. Sankofa, meaning “Go Back and Get It” is SIIKA’s take on the traditional Chai tea, but with African ingredients. In this we have South African Rooibos as the base, with amazing and fragrant vanilla beans from Madagascar, mixed with cloves from Zanzibar.

Likewise, our Kindred blend pays homage to a popular hibiscus drink that is consumed throughout the diaspora, whether it be known as Sarkade, Sorrel, Sobolo, etc. Lastly, the Clarity blend is a fragrant and visually pleasing blend inspired by the ocean. We are children of the diaspora, and more specifically the Atlantic Ocean, which can represent a path of bondage, or a path of freedom — it just depends on which perspective you choose to focus on.

The honeys are very, very personal to me. They are named after women in my lineage. I can trace working with plants and herbs directly through these women. Also, pre-colonization, Africa and most indigenous societies were matrilineal, which meant that while the men were the foundation, the women were the core.  Family life revolved around the women. And SIIKA is about honoring that which made and continues to make us whole.

Zenger: What is the name, and what are the ingredients of the one for your maternal grandmother?

Makuyo: The infusion, Freddie, is named after my maternal grandmother, Freda Lee, affectionately called Freddie by her father and brothers. She was such a sweet and pure love … but she was so spicy! She and I would watch “The Price is Right” and soap operas back-to-back daily when I got dropped off from elementary school.

Collards, kale, or mustards would always be simmering, and were a constant at our every-Sunday family dinners. However, she was known for telling the dirtiest of jokes!

She would wait until the children were outside, playing, to get into her jokes, but somehow we still heard them anyway. For her blend, we pair raw honey with pimento pepper for a subtly sweet, but undeniably fiery experience.

Zenger: How about the one for your mother, Renee?

Makuyo: I infused orange peel, cloves, cinnamon, and ginger with honey to create this blend. My mother switched to a plant-based lifestyle in the mid-’70s.  It was an unpopular decision, but she stuck with it, learned, studied and experimented on her own. She is now is the go-to for countless friends and family looking to switch to a healthier lifestyle.

She is the health-conscious teacher, advisor and example that she didn’t have. I always remember her going to the gym and keeping us active in sports (which I later found out was her tool to keep us off the streets and away from drugs).

Though it was difficult understanding why we shouldn’t eat sausage or pepperoni pizzas at the soccer teams’ pizza parties, her health-based eating and lifestyle habits are evident in each of her children today, through our health-based careers and mindsets. This infusion honors my mother, Renee Anastasia, the first true healer I know.

Zenger: What is the name and ingredients of the ones named after your paternal grandmother and why?

Makuyo: She is my namesake. This honey is infused with vanilla beans and lavender. My paternal ethnic group, the Krobo of present-day Ghana, names their children by position and/or characteristics in birth. It happens that both my grandmother and I were the fourth child of our fathers, so we are both named Makuyo. By her children and grandchildren, she is known as Yaayo. Though I speak little Ga, and she spoke no English, somehow we still found a way to communicate and connect. The vanilla and lavender in this blend is the perfect balance of determination and gentleness, just like my Yaayo.

Zenger: How about for your maternal great-grandmother, Elnora Terry?

Makuyo: This infusion is named after my great-grandmother, Elnora, whom we affectionately called Mama. It contains chocolate mint, calendula, and rosemary. Myself, my mother and grandmother shared a connection with gardening and sewing.

I remember sewing patchwork quilts and working in an urban garden with my mother and grandmother as an adolescent. This love and fellowship through gardening and sewing can be directly traced back to Mama, who grew all varieties of vegetables and herbs alike for her family on our land in Mississippi.

My most recent Indigenous ancestry, as the original inhabitants of this country, is also directly traced back to Mama. As such, many Native American tribes believe that Rosemary is a gift from the Creator and widely used varieties of mint to treat a plethora of conditions.

Zenger: What is the significance of using honey?

Makuyo: While working with herbs is innate to me, I intuited the idea to create herb-infused honeys. While herbs are normally attributed to healing, honey has vast healing properties as well.

Honey is also attributed to sweetness and an almost soft-like joy. Not only delighting the taste buds, SIIKA hone’s cause you to pause and to be reminded of the sweetness of life.

That pause and that reminder can be healing in such a fast-paced, hectic world. So infusing herbs with honey allows us to signify that healing can be so sweet.

Zenger: I understand that you like to travel. What are some of your noteworthy destinations?

Makuyo: I’ve traveled across the country, the Caribbean, as well as a few countries in South America and Asia. I did my first solo trip to Salvador de Bahia in Brazil and it was an amazing experience. Through all of that, I definitely want to see so much more of Africa. It is such a beautiful and rich continent, culturally, in its resources and its landscape. There’s so much more I want to experience there.

Astrologically, I’m a Sagittarius Sun, which are known as travel-enthusiasts, sporadic and considered the truth seekers of the zodiac. I was created to love travel. I don’t travel just to go or get away, I travel to experience peoples and cultures. It allows me to understand that though we may be thousands of miles and oceans away, there is an interconnectedness in us, no matter what the modern world displays.

For instance, when I went to Brazil solo, I spoke very little Portuguese, and ill-informed of me, the people there speak little to no English. Yet I was still able to carry on conversations and interact because we weren’t so much focused on what separated us — the language barrier — but more on what connected us — the human experience.  Likewise, I named one of my teas, Kindred. Travel is very much a learning experience for me.

Zenger: How critical are sisterhood and empowerment to black women?

Makuyo: While sisterhood and camaraderie are essential amongst black women, we do a disservice to ourselves when we ignore the importance of unity with black men.

I see a lot about uplifting and empowering black women, which is great, but we should be careful not to miss uplifting our black men, as well.  We need both our men and women to truly be able to rise and accelerate as a people.

Makuyo: Critical to my brand is my development as a woman. I played soccer from age 6 until I graduated from high school, not so much for its competitive aspect, but because it taught me discipline that extended far beyond the playing fields.

Through soccer, I had the opportunity to be around a diverse group of teammates, experiences (my club coach played professionally overseas), and was also my first taste of travel via traveling state-to-state for tournaments and camps.

Zenger: I understand that you elected not to play college soccer, although the opportunity was there?

Makuyo: Yes. Although I was offered a scholarship to continue playing soccer in college, I ultimately chose a school that did not have a soccer program, North Carolina A&T, which was and still is an engineering powerhouse. I knew from a young age that I wanted to be an engineer. Being raised on the East Coast, it was second nature for me to attend a Historically Black College/University.

My sister attended Howard University and since it was local, I was constantly in their yard with her. However, after visiting NCAT, learning about the history of their Black Panther Party and The A&T Four (who started the Sit-In Movement), my decision was made. Beyond academics, NCAT was integral in my growth as a black woman.