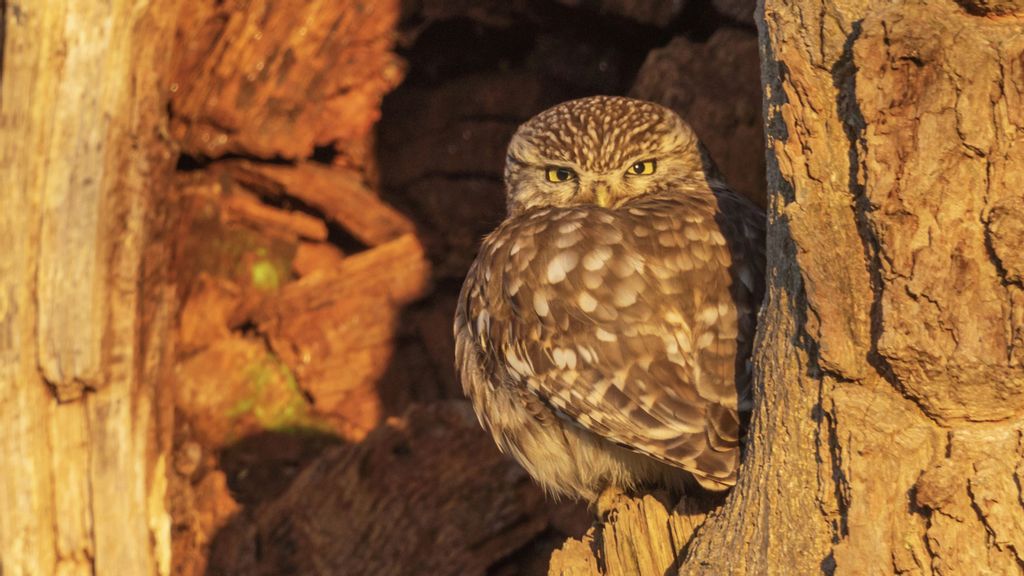 A perfectly camouflaged owl is concealed in a tree as its feathers blend seamlessly with the bark.  (Andrew Fusek Peters/Zenger)

There are about 250 species of owls in the world, and the birds known as little owls migrated from mainland Europe to England. Some are impossible to spot when they are concealed in trees and their feathers blend seamlessly with the bark.

That’s where photographer Peters comes in.

Peters built a special hide in Church Stretton, Shropshire, England. And for six weeks, every day at dawn, he captured the owls at the start of their breeding season. The photographer only realized he had taken the stunning shot of the hidden bird when he scrolled through his pictures on his computer.

He took the remarkable photo on March 15, after finding the owl nesting in trees.

“I have been taking pictures in this area for about four or five years,” Peters said. “A top birder gave me a tip as to where these owls were. After speaking to the farmer, I found out how well these little owls were doing.”

The photographer said the birds are spread around hamlets and rural areas. There is a colony of them — maybe four or five pairs of little owls. “They have bright beady yellow-colored eyes; they look like little buttons,” he said.

Peters says the owls are “absolutely tiny and really beautiful. Unlike the gray squirrel, they don’t upset any other of the species around. They are doing very, very well.”

“I put my hide up in a field and camped out for six weeks,” he said, noting the owls are “normally very shy.

“There was a hole in one tree where they like to sit, but the most exciting thing was when I captured the chicks. Those chicks had no human fear whatsoever. That meant I could get up close to them which was pretty.”

He said the chance to see males and females getting ready to breed was “awesome” and there will be even more chicks there soon.

“Those jewel-like eyes … the chicks are so fluffy and almost melt into the bark-scape. I even managed to catch a chick having a snooze.”

Owls belong to a group of birds called Strigiformes. They are known to vocalize at a distinctively low frequency, which allows their songs to travel long distances.

Protecting three rare Ural owls became part of a Swiss zoo’s mission last October. The Zurich Zoo is reintroducing the nocturnal birds to Austria, where they have been considered extinct for decades.

There has been a 10-year effort to secure this goal. The Zurich Zoo in Switzerland says it “is stepping up its commitment to protecting the species.”