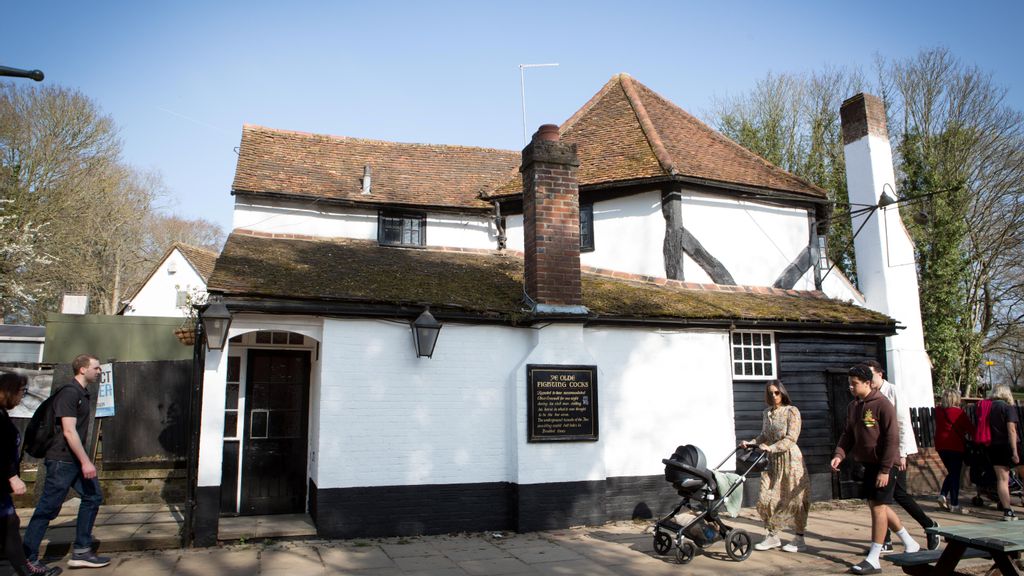 Britain's oldest pub dates back to A.D. 793 and once hosted Oliver Cromwell, but it shut down in February due to the devastating impact of the pandemic. Former staff have saved th pub, and it's set to open April 4. (Matthew Newby/Zenger)

Britain’s oldest pub has been saved by former staff after its shock closure — and they’ve snubbed PETA’s calls for an animal-friendly name change and all-vegan menu.

Ye Olde Fighting Cocks, which dates back to A.D. 793 and once hosted Oliver Cromwell, shut down in February due to the “devastating” impact of the COVID pandemic.

Now its ex-manager and head chef have teamed up to rescue the beloved boozer — while dismissing pleas from animal lovers for a “21st-century revamp.”

PETA — People for the Ethical Treatment of Animals — appealed last month for a new landlord to rename the pub Ye Olde Clever Cocks, The Cheery Chooks or The Happy Hens.

Activists had complained the pub’s current name “calls to mind the violence and cruelty of a hideous blood sport that has been outlawed in the UK for more than a century.”

However, new landlord Martin Robinson has dismissed the pleas and instead promised to install a huge barbeque area in the pub’s garden.

Martin, who managed the pub for 12 years, said: “You just wouldn’t change this place, it’s not something you’d consider.

“We’re keeping it as original as possible. The only thing that’s modern is the service and menu — the food is traditional with a modern twist.”

He will run the pub alongside its former head chef Ian Baulsh and designer Sam Walker.

“Ian, Sam and I are now excited to be taking the pub into the next chapter of its story, and very much look forward to welcoming many familiar faces back here, and hopefully some new ones too,” Martin said.

The pub is set to reopen on Monday, April 4.