An extensive narrative of the kingdom's history is told by its own people.
By Onome Amawhe March 28, 2022
Facebook
Twitter
Linkedin
Email 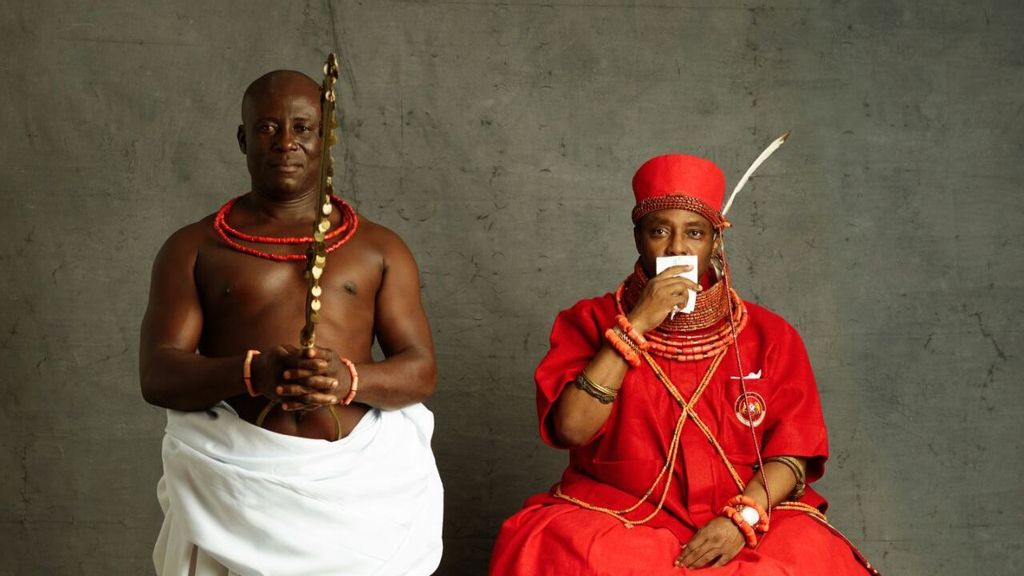 The Oba of Benin and his subject. (Courtesy of Oba Ewuare Foundation)

LAGOS, Nigeria — “The Benin Monarchy: An Anthology of Benin History” is a one-of-a-kind book on the kingdom of Benin in what is now southwestern Nigeria and whose history dates back to the 900s. The Benin empire is one of the world’s oldest royal dynasties, which was also one of West Africa’s most powerful kingdoms until the late 19th century.

It is not to be confused with country Benin, formerly known as Dahomey and bordered by Togo to the west and Nigeria to the east. Benin the country was under French colonial rule until 1960.

This anthology of Benin, first published in 2018, is an extensive narrative of the kingdom’s history as told by its own people and expert analysts and filled with tales of grandeur, creative triumphs and obstacles faced in the empire over the centuries. The texts of the four-part book are a delight for the general-knowledge seeker and a superb and vital resource for researchers and extremely inquiring readers.

“With the authority vested in me by Almighty God and our ancestors, I granted approval to the publishers to convene historians, anthropologists and essayists to put the history of our kingdom in perspective as we, the most intimately concerned in this epic, can tell it, in its truest details,” Oba (Emperor) Ewuare II (Omo N’Oba N’Edo Uku Akpolokpolo) said when commissioning the book to be written.

Stories of many of the world’s ancient civilizations have often been altered by either European managers of Africa’s image or modern African historians and literary men and women. This most comprehensive publication on the history of the Benin kingdom is a plausible effort to set the records straight from those who know it best or studied it extensively.

Contributors to this book include eminent Benin academicians and scholars whose knowledge and writing talents offer readers insightful analyses on the many topics under review.

The book may also be seen as one of the most visually rich representations of Benin’s large and valuable collection of arts and antiques, many of which are dispersed across the globe in private and institutional collections. A photographic album of the Benin monarchy from 1897 to 2017 is also included.

Unlike many of his predecessors, Ewuare II has succeeded in getting commitments for the spiritually and historically important Benin Bronzes that were stolen in 1897 by the British colonizers to be returned to his people.

“The looted artifacts represent Benin’s cultural heritage, created by our forefathers and ancestors in accordance with the kingdom’s customary standards and customs,” Ewuare II said during a Feb. 19 ceremony in which he received two of the artifacts looted from Benin during the 1897 British military expedition.

“They are not the property of any government or corporate body that is not an entity of the Benin kingdom,” Ewuare II added. “That is why the people of the Benin kingdom and the entire royal family would not accept the reparation of the artifacts, which were stolen from the palace during the 1897 invasion, to any other location except the palace where they were looted from.”

As far as sharing the Benin treasures with the world, Ewuare II said he believes “a working arrangement can be agreed, whereby our ownership of the artifacts having been established, those museums will continue to enjoy the presence of our artifacts.”

The Smithsonian Institution in Washington, D.C., said on March 9 that it also planned to return most of its collection of Benin Bronzes.

Oriiz Onuwaje, the book’s originator and lead designer, told Zenger that the goal was to ensure that the book could be read and completely experienced visually on multiple levels.

“The prominent use of well-chosen and arranged images and visuals throughout the book, particularly of the finest Benin bronze, ivory and wood artworks, is to ensure that they are well-documented for posterity. More importantly, the book was created to encourage the greater study of Benin’s history, traditions and culture.”

Speaking at a media briefing in Benin City, now capital of Edo state in Nigeria, Martin Uhomoibhi, chairman of the Global Book Presentation Committee (GBPC), characterized the book as one of the most important and iconic works on the renowned monarchy and people of the Benin kingdom.

“The book, which weighs roughly 6.8 kilograms, contains 18 researchers, including some of the most well-known authorities on Benin history, 559 pages of well-researched articles and 441 memorable photos. The book heralds the culmination of His Majesty’s dedicated work to safeguard our heritage and influence the regeneration of the Benin kingdom’s unique essence in the world’s consciousness.”

“It’s also part of a larger effort to preserve our heritage and contribute to a growing movement around the world to ensure that the Benin empire’s history is properly chronicled.”

From the red cover to the gold lettering, the book’s creative design raises the reader’s expectations and, rightly, does great justice to the Benin monarchy, arts and people. The iconic miniature sculptural portrait in ivory of Idia, the first Iyoba (Queen Mother) of the 16th century Benin empire, also graces the book cover. This symbol was one of four made in her honor by her son, Oba Esigie, who brought the kingdom to its apogee in the 16th century.

Red, which is the prominent color and brand of the Benin kingdom, is also a crucial factor that was purposefully picked for the book. As a result of the usage of many red pages in its design, the book was affectionately dubbed the “Benin Red Book.”

“The Benin Monarchy: An Anthology of Benin History” was published by Wells-Crimson Ltd. under the auspices of the Oba Ewuare Foundation in collaboration with the Benin Traditional Council.