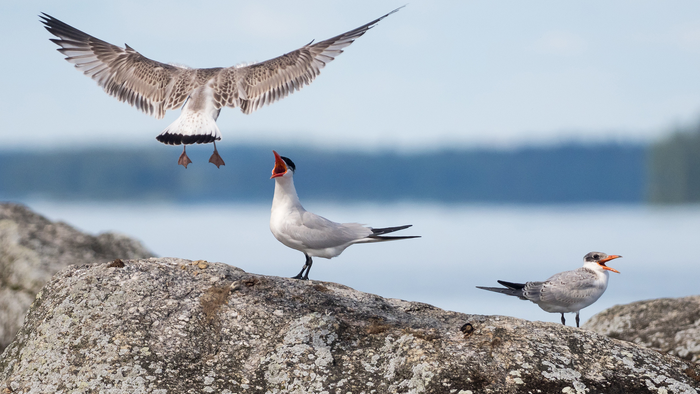 Male Caspian terns are not only responsible for leading their young on their first autumn migration to wintering quarters, but they also have an important role in defending their young against possible threats. Here, a young tern (bottom right corner) is seen roosting on a stopover site together with its parent, which is seemingly not happy about the approach of a young common gull. (Petri Hirva)

The males of a migratory bird species not only defend their young from danger but also lead them on their inaugural winter migration.

A team of researchers from Scandinavia and the United Kingdom studied the Caspian tern (Hydroprogne caspia) and published their results in the journal Nature Communications. The Caspian tern is a fish-eating species of water bird that is widely distributed across the world.

In North America, it is found at the Great Lakes and on ocean coasts. It can also be spotted in Europe, Asia, Africa, Australia and New Zealand.

While the North American flock migrates to the Caribbean and South America in the winter, the European and Asian flocks go to the African and Asian tropics.

The researchers used GPS tracking on birds departing from Europe, which showed that adult male birds bear the responsibility of leading their young as they take flight from the Baltic Sea to Africa.

“We wanted to get a better idea of how the migratory skills of birds are passed from one generation to another in a species where individuals normally migrate together,” said lead author Patrik Byholm of the University of Helsinki.

It has long been known that birds migrate communally, as witnessed by the annual migrations of large flocks of geese during the North American spring and fall seasons.

However, little is known about interactions among the members of traveling flocks. Having studied the Caspian tern’s migration behavior, the research team found that father terns teach their young about the secrets of migration. The fathers also defend their young from dangers they encounter along the way.

“This is very fascinating behavior, which we really did not expect to find when setting up our study,” Byholm said. The scientists even observed a case of a foster father bird filling in for a father’s role.

Young birds always stayed close to the adult bird, the study revealed. Indeed, young strays died. The authors of the study suggest that in Caspian terns, young birds must remain in contact with a parent during a first foray to winter grounds. The team also found that when the young birds make their first solo return flight to breeding grounds in Europe, they took the same migratory routes on which they were accompanied by their fathers.

“We show that in Caspian terns, a species typically migrating solo or in small groups, breeding partners do not migrate together and that male (and foster male) parents carry most of the responsibility for guiding naive young during their first outbound migration. The bond between a parent and young only gradually breaks down upon arrival to the wintering area,” the authors said in the study.

“This indicates that in Caspian terns, migration knowledge is inherited through culture from one generation to another. This has consequences on the decisions individuals make years after they first migrated with their father,” said study co-author Susanne Åkesson from Lund University, Sweden.

The team has not yet determined why it is male terns, rather than female, which are the principal protectors of their young on a first migration. Abandonment of young by female birds is found in terns and other species and may be an evolutionary adaption that favors the survival of females, according to the study.

In the face of habitat loss and other challenges, the future of Caspian terns hinges on how effectively the knowledge of stopover sites and migration routes is passed down from generation to generation.