Cold Weather In The Northeast Leaving As March Turns To April? 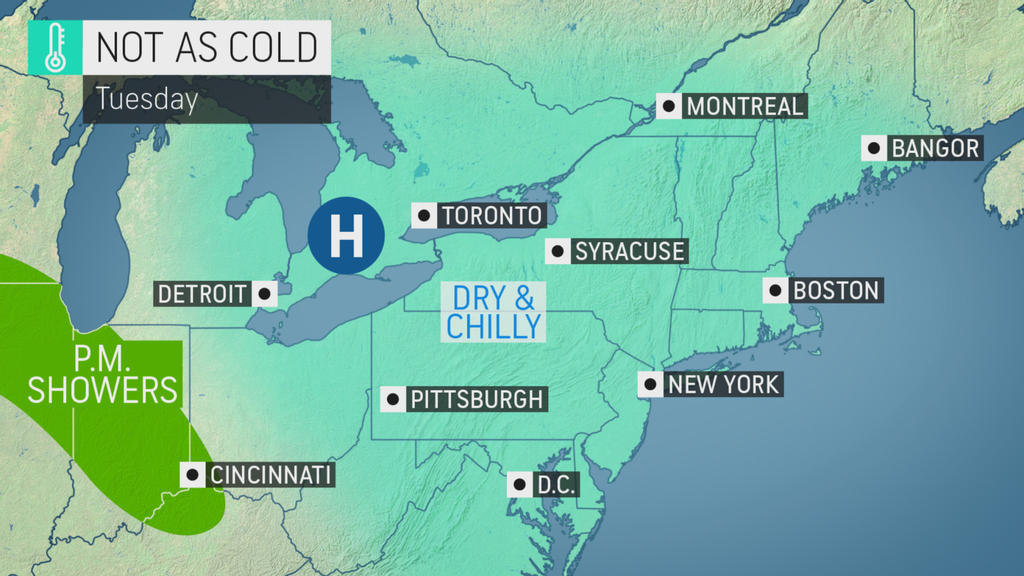 The fast-track to spring warmth at midweek will be accomplished as a big southward dip in the jet stream is swapped with a northward bulge. (AccuWeather)

The harsh cold and biting winds, more typical of January, that gripped the Northeast over the weekend and at the beginning of the new week will soon be a thing of the past, as topsy-turvy spring conditions will yield some warmer weather and perhaps severe thunderstorms during the last days of March, AccuWeather meteorologists say.

After many days of consistent warmth earlier in March, temperatures crashed to 10-20 degrees below average from Saturday to Sunday and were bottoming out on Monday. Some spots even saw a dusting of snow or snow flurries. Typical highs range from nearly 40 F over the northern tier of New England to the mid-60s in southeastern Virginia during late March.

“The meteorological North Pole, which showed quite a bit of affection for the Northeast over the weekend, will bid farewell during the middle days of this week and allow temperatures to swing back above average,” AccuWeather Senior Meteorologist Alex Sosnowski said.

The fast-track to spring warmth at midweek will be accomplished as a big southward dip in the jet stream is swapped with a northward bulge.

The transition to warmer weather will not be free from some problems of the wintry variety, however.

A brief period of ice and wintry mix that will primarily impact the Upper Midwest also has the potential to make for slippery travel on bridges and overpasses across central Pennsylvania, southwestern New York, northeastern Ohio as well as farther south into the mountains of West Virginia and western Maryland late Tuesday night to Wednesday morning.

Added moisture will join in from the Atlantic Ocean and the Gulf of Mexico Wednesday night and Thursday in response to an approaching storm system.

“The tendency for winds to shift to the south during midweek will cause rain showers to break out in many areas on Wednesday night,” said AccuWeather Senior Meteorologist Carl Babinski.

The southerly wind Babinski mentioned will also pump noticeably warmer air into the region on Thursday, allowing temperatures to soar nearly 50 degrees higher than Monday. Thermometer readings in New York City will climb into the upper 60s and into the middle 70s in Philadelphia and Washington, D.C.

As a cold front associated with the storm system approaches Thursday and Thursday night, drenching showers and locally severe thunderstorms are likely to erupt for the mid-Atlantic and much of the Atlantic seaboard. Places all the way down the I-95 corridor, such as Wilmington, North Carolina, and Jacksonville, Florida, and places farther inland like Charlotte and Atlanta could see some thunderstorm action. Some of the storms could bring damaging wind gusts, hail and flooding downpours.

Northeasterners should not get used to the mild weather, however, as AccuWeather long-range forecasters are predicting more abnormally chilly air to return in early April as another big dip in the jet stream approaches.

“But, perhaps as words of comfort for warm weather fans, the air slated to move in for the upcoming weekend does not appear to be as nearly as cold as that which rolled in on Saturday and stuck around on Monday,” Sosnowski said, adding that “temperatures may be only 5-10 degrees below average.”

Despite the recent bout of January-like temperatures, many cities in the Northeast have had a relatively warm March, with temperatures largely above average, especially prior to the cold blast. As of March 27, Boston, New York City, Pittsburgh, Washington, D.C., and Baltimore, all averaged temperatures of more than 4 degrees Fahrenheit above normal during the month of March, with Buffalo, New York, and Philadelphia, taking the cake at more than 5 degrees above average. The cold air that moved in recently should be brief enough as to not have a major impact on the overall March warmth from a statistical standpoint.

«Previous Post
Celestial Trio To Shine Together Before Final Sunrise Of March»Next Post
Heat Shatters Records On One Side Of The US, Shuns The Other Side