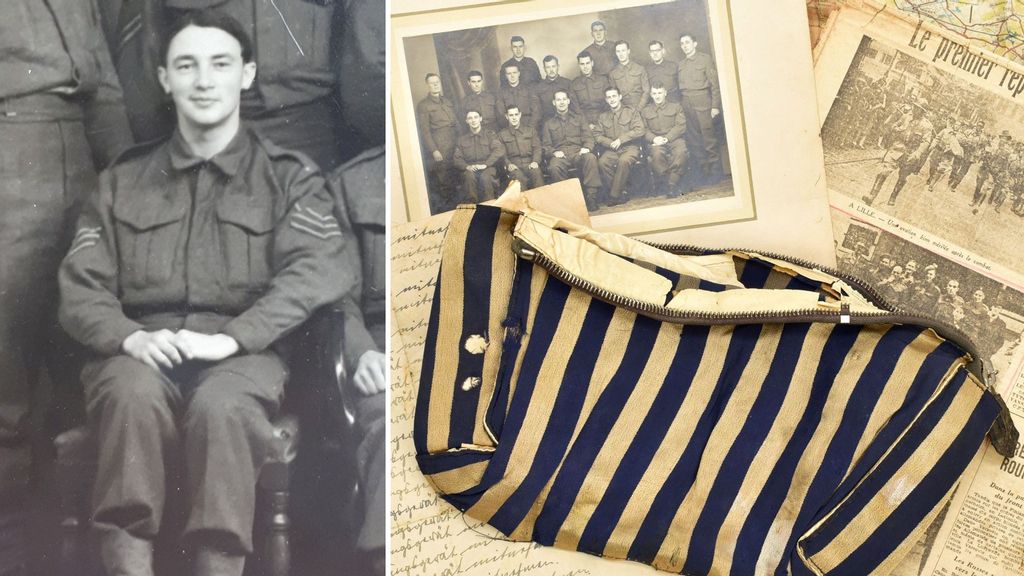 A British soldier’s war trophies, stolen from Nazi troops — including the last written words from mass murderer Heinrich Himmler — have sold for almost $9,000.

Hitler’s henchman Himmler posed as an ordinary soldier and used fake documents in a bid to flee the Allies following Germany’s defeat in 1945.

He was disguised in a shabby military uniform when he was stopped by an army patrol who ordered him to show them his ID papers.

His escape plan was thwarted when eagle-eyed British Sergeant Grenville Grayer spotted a stamp used by SS soldiers on his documents.

He ordered the soldier to write dozens of lines on a piece of paper to check his handwriting against signatures on the documents.

The test showed discrepancies in his writing style and Himmler admitted to his captors his real identity as the feared head of the SS.

But Himmler cheated justice after he bit on a cyanide capsule — nicknamed the “SS cough drop” — hidden in his tooth and he dropped down dead.

After his death, Sgt. Grayer, who worked for the British Intelligence Corps, took the written lines along with Himmler’s silk toiletry bag as souvenirs.

The lines and bag were among a collection of items sold at Richard Winterton Auctioneers for a total of 6,710 pounds ($8,850) on March 24.

A Luftwaffe pilot’s parachute harness sold for about $450 and a collector snapped up a Swastika armband for about $225.

“Mr. Grayer would often chat with his family how one of the soldiers looked uneasy and out of place. When the prisoners were checked, some were in possession of documents which the Intel Corps knew were being faked to cover up real identities.

“One of these was a Sgt Heinrich Hizinger.

“Mr. Grayer and another sergeant by the name of Britton became even more suspicious and the suspect was ordered to write lines to confirm and ascertain his handwriting. Soon the game was up, and the man identified himself as Heinrich Himmler.”

Sgt. Grayer, from Oldbury, West Midlands, was born in 1917 and joined the Royal Army Service Corps in 1939 before moving to the newly formed Army Intelligence Corps.

It was while serving with 45 FSS in Germany following the Nazi surrender that he stumbled across Himmler on May 22, 1945.

The German soldiers were stopped at the Bremervorde bridge and handed over to 45 FSS for identity checking.

The next day Himmler killed himself — just three weeks after Hitler’s own suicide in his secret bunker.

Just hours after Himmler’s death, Sgt. Grayer pocketed the handwriting samples and the silk toiletry bag as a war trophy.

Sgt. Grayer passed the souvenirs to his family who have kept them safe since his death in 1955 at the age of 78.

His medals included his British Empire Medal in its original box of issue, plus Africa, Italy, France and Germany Stars, Defense and War medals.

Other paperwork includes a photocopy of Himmler’s arrest report and an original photo of Sgt. Grayer while working with 45 FSS Intel Corps.

Sgt. Grayer’s nephew Martyn Grayer, of Lichfield, Staffordshire, said: “It has been a fascinating experience to revisit the extraordinary story that relates his wartime experiences and the event of Himmler’s capture that with recent events seem to resonate even more.

“Our ‘Uncle Gren’ fulfilled the entire definition of a ‘favorite uncle’, a unique character, generous, supportive with an anarchic humor but most of all liked by everyone he met.”