What came to be known as the Pleasant Hill school bus tragedy is the turning point that brought children's bus safety to the fore.
By Thomas Leffler March 27, 2022
Facebook
Twitter
Linkedin
Email 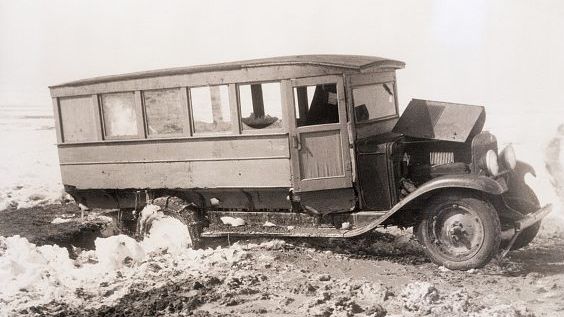 The school bus in which six children died when they were marooned in a Colorado blizzard on March 31, 1931. (Getty Images)

The morning of March 26, 1931, brought a 60-degree climate in Kiowa County, Colorado. The March morning in Kiowa was so warm that 11-year-old Louise Stonebraker was able to leave for Pleasant Hill School with a light sweater instead of her normal jacket. Just hours later, to the surprise of Kiowa and to the horror of citizens across the United States, Stonebraker and her classmates were fighting for survival in blizzard-like conditions.

Nearly 90 years later, what came to be known as the Pleasant Hill school bus tragedy stands as the turning point that brought children’s bus safety to the fore, sparking major regulations that remain in place today. Such regulations include what is now the school bus trademark bright yellow paint job, as well as a uniform code on what the transportation vehicles should include in their design. The revisions and additions to school buses can be traced back to the seemingly pleasant spring morning in rural Colorado.

A pair of drivers were assigned to the students at Pleasant Hill School, with one picking up students in his car while bus driver Carl Miller took care of the remainder. Miller’s bus was not the ordinary type of school bus we’re accustomed to today, but rather it was a makeshift vehicle consisting of a 1929 Chevrolet truck with a wooden body attached to the bed.

But what started out as a balmy spring morning quickly turned to a blustery snowstorm during Miller’s morning commute, something that would only escalate as the day went on. After the teachers made the decision to send the children home due to the increasingly perilous conditions, Miller’s “bus” headed to a nearby farmhouse for safety. In a retrospective book on the tragedy, Children of the Storm, authors Ariana Harner and Clark Secrest explained that the gravel roads Miller would be taking “did not follow section lines, as they do today, and some roads weren’t roads at all.”

Immediately taken aback by the lack of visibility in the area, the blizzard forced Miller to take a wrong turn and eventually careened into a ditch at about 9:30 a.m. For the 22 students on board, the next 33 hours would be the most dangerous of their lives. Miller made sure to children jumped up and down and moved about to stay warm. Even as the storm prevailed throughout the evening hours, everyone on Miller’s vehicle survived due to the constant movement. Reports from the time state that temperatures the next morning, March 27, were around -20 F with winds up to 70 mph.

Making the situation more dire was the brutal wind ripping off one of the strips of cardboard covering the vehicle’s rear window. Snow was let in through the broken window, as well as through the bottom of the bus, turning the environment even more frigid.

Help eventually arrived that afternoon, as two fathers of the missing children found the stranded vehicle, loading the survivors onto a wagon and traveling a half-mile to a nearby ranch. By the time of the rescue, three students had passed away, including Louise Stonebraker. Those that survived the two-day ordeal experienced tremendous pain during a thawing-out, with two more children passing away in the process.

Cries of concern were heard when the nation first found out about the Pleasant Hill tragedy, but the real work in transportation safety occurred several years later. In 1939, Columbia University professor Frank W. Cyr put together the first National Minimum Standards conference, that established basic standards for manufacturers of school buses. The conference produced the adoption of 44 standards, with perhaps the most important coming in the field of bus visibility. At the conference, representatives from 48 states and from school bus manufacturers agreed that all buses would be painted in a bright yellow hue in order to prevent a bus from being hidden in bad weather, such as what occurred in the Pleasant Hill tragedy.

One recent breakthrough took place in November 2021, when President Joseph Biden signed the “STOP for School Buses Act” in the Infrastructure Investment and Jobs Act (IIJA). The bi-partisan supported bill reauthorized vehicle safety programs until 2026, provided funding for electric school buses and near-zero emission vehicles. Electric school buses have become a more widely accepted option for modern transportation due to advances in the technology, as well as decreases in battery costs, according to an Environment America report. The report also states that electric buses can reduce both health and environmental threats created by diesel buses.

At the beginning of the 1930s, there were no such regulations for school buses, with many school transportation vehicles being similar to the makeshift transport Miller drove during that fateful March day. The heroic struggle went through by the Pleasant Hill survivors was not for naught, as the end of the decade’s Minimum Standards Conference proved. From the 1939 conference, school bus safety has remained a priority for lawmakers in the United States, as well as for advocacy groups. Several organizations, such as the National School Transportation Association (NSTA) and the National Association for Pupil Transportation (NAPT), are on the forefront of taking on modern transportation challenges.

Perhaps most importantly, the bill requires the U.S. Department of Transportation to review illegal passing laws, penalties and levels of enforcement across the 50 states. Preventing illegal passing of school buses is one of the top modern issues of transportation, NSTA says, with the group’s goal being to “ensure students are just as safe getting on and off their yellow school buses as they are riding inside their yellow school buses.”

“Riding in a yellow school bus remains the safest mode of transportation to-and-from school for students,” NSTA President Carina Noble stated. “Unfortunately, illegal school bus passings by motorists continue to plague the nation, and the comprehensive U.S.D.O.T. program to address illegal passing … will implement a national campaign to raise local awareness of this most concerning issue with the shared goal of making student commutes even safer.”

On March 31, 1931, a group funeral service was held for the children lost in the Pleasant Hill tragedy, with over a thousand residents of southeastern Colorado and western Kansas in attendance. Nearly 90 years later, the lost are not forgotten, becoming the impetus for safe travel of millions of students nationwide.