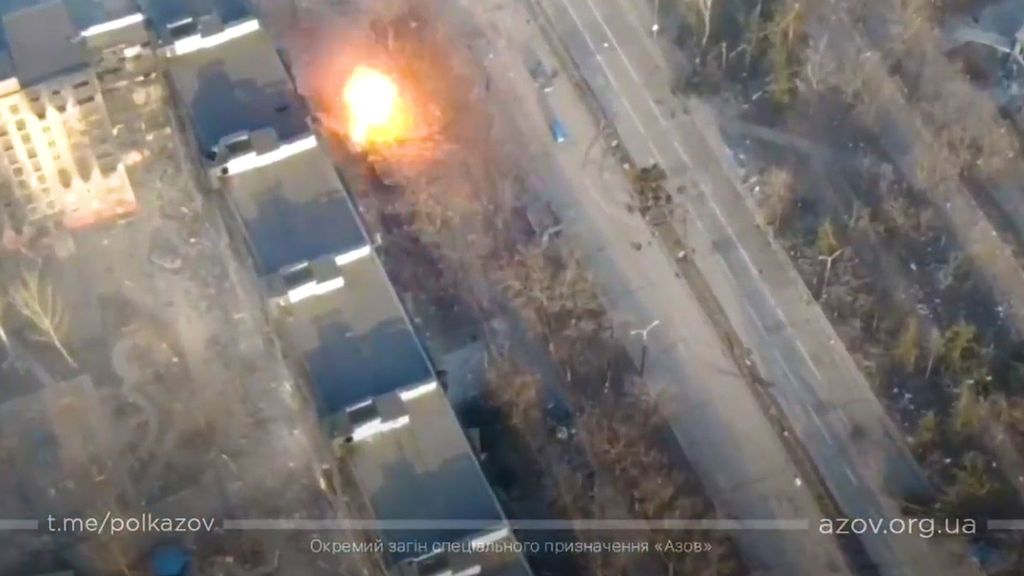 A Russian army tank is seen being destroyed by Ukraine's Azov Regiment in Mariupol in this screenshot from a video, the unit of Ukraine's National Guard says. (@Polk_Azov/Zenger)

Fighter of Ukraine’s Azov Regiment in Mariupol took out two Russian armored vehicles using a mortar and without damaging any of the nearby buildings as seen in a video shared by the regiment on March 25.

“It should be noted that despite the fact that the Russians are hiding among the houses, the fighters of the Azov Regiment are deliberately destroying the enemy without destroying the civilian infrastructure,” the regiment said in a statement accompanying the shared videos.

The footage appeared to have been shot from the sky and was focused on what appear to be Russian positions in bombed-out Mariupol, in southeastern Ukraine.

“Unlike the Russians, who are destroying cities to the ground, our mortars are aiming without destroying housing infrastructure,” the regiment’s statement said.

The Azov Regiment began as a far-right, neo-Nazi group that started out as an urban militia and a political party. It has since expanded and, through service to Ukraine, has been incorporated into the national guard.

A month since Russia invaded Ukraine, 4.3 million children — more than half of the country’s estimated 7.5 million child population — have been displaced, the United Nations Children’s Fund (UNICEF) said Thursday.

“The war has caused one of the fastest large-scale displacements of children since World War Two,” Catherine Russell, the head of UNICEF said. This includes more than 1.8 million who have crossed into neighboring countries as refugees and 2.5 million who are now internally displaced, the agency says.

“This is a grim milestone that could have lasting consequences for generations to come,” Russell warned.

At least 78 children have been killed, and 105 have been injured in Ukraine since the war began on Feb. 24, the U.N. human rights office said, pointing out that the numbers represent only those casualties that the United Nations has been able to confirm and that the true toll is likely far higher.

According to the International Organization for Migration, one in three internally displaced people in Ukraine suffers from a chronic condition.

“In just a few weeks, the war has wrought such devastation for Ukraine’s children,” Russell said.

“Children urgently need peace and protection. They need their rights,” she added, appealing for an immediate ceasefire and greater protection of children.

French President Emmanuel Macron told reporters Friday that he is working with Turkey and Greece on plans for a “humanitarian operation” to evacuate people from devastated Mariupol.

He said he hoped to speak to Russian President Vladimir Putin “within the next 48 to 72 hours” regarding the planned initiative.