Much-Needed Rain On The Way For Parched Southwest

It all kicks off late Sunday for the West Coast, according to forecasters.
By Mary Gilbert March 26, 2022
Facebook
Twitter
Linkedin
Email 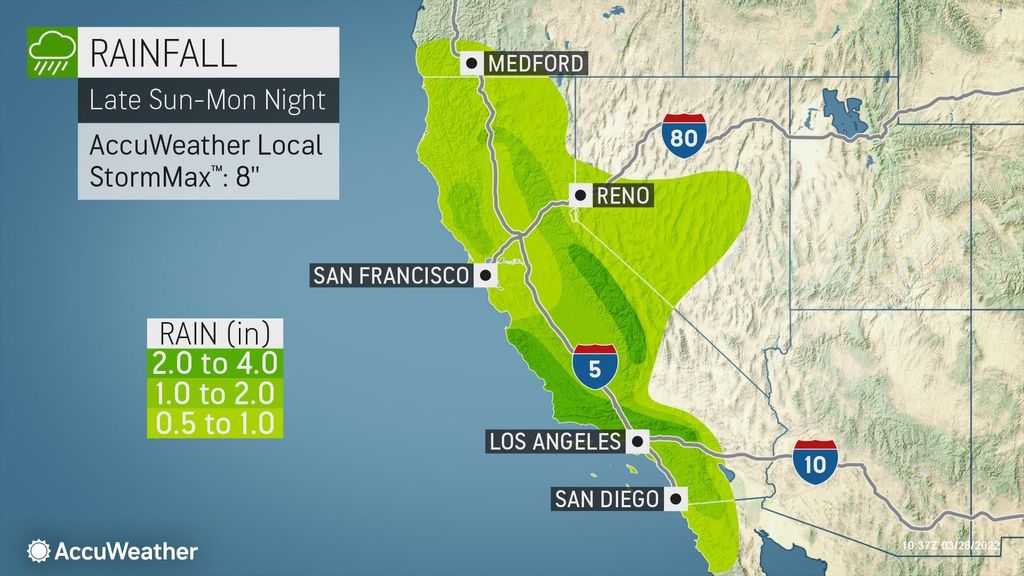 Wet weather on the West Coast Sunday will push farther east on Monday and bring showers to much of Nevada. By Monday evening, showery weather is set to arrive in Las Vegas. By Monday night, wet weather will stretch across a wide swath of the Southwest, from California to at least Utah and Arizona. (AccuWeather)

AccuWeather forecasters say a significant and widespread rain event is on the way for the southwestern United States early this upcoming week. While any rain will be beneficial for the abysmally dry region, some issues may still arise due to its intensity.

It all kicks off late Sunday for the West Coast, according to forecasters.

A developing storm will approach the California coast on Sunday and is set to overspread rain into coastal areas like San Francisco by the late afternoon, Santa Barbara by the evening and Los Angeles overnight. Farther north, places like Medford, Oregon, will begin to encounter showers by Sunday night.

Rain, tapering to showers at times, will continue for much of Monday across California. The steadiest rain from this event will target coastal California and parts of the Sierra Nevada range. Some snow will fall in the highest elevations of the Sierra Nevada, while travelers at pass levels are forecast to encounter mainly rain.

Wet weather will push farther east on Monday and bring showers to much of Nevada. By Monday evening, showery weather is set to arrive in Las Vegas. Sin City hasn’t had measurable precipitation, defined as 0.01 of an inch or more, since Jan. 18.

By Monday night, wet weather will stretch across a wide swath of the Southwest, from California to at least Utah and Arizona.

Back at the coast, a push of energy at the upper levels of the atmosphere Monday night will bring the opportunity for a few rumbles of thunder and even isolated instances of small hail to occur for portions of Southern California. Anyone out and about in major metros like Los Angeles Monday night will need to keep an eye to the sky for changing weather conditions.

Rain will taper off for much of California, Oregon and Nevada by Tuesday as the storm swings through the Rockies.

Climatologically, the winter months are the height of the wet season for California and much of the Southwestern states, so the dryness since the beginning of the year could hardly have come at a worse time.

Farther north, the Bay Area is also shockingly dry. San Francisco stands at just 7% of its average precipitation year-to-date, while nearby Oakland remains at just 6%.

Over the course of this early-week event, widespread rainfall amounts of 0.50 of an inch to 1 inch are likely, with some areas set to receive 1-2 inches.

As much as 2-4 inches of rain is possible for favored upslope areas, according to AccuWeather Senior Meteorologist Dave Houk. This includes portions of the Transverse Ranges and the Sierra Nevada.

While this amount of rainfall is unlikely to completely eliminate any drought conditions across the Southwestern states, any amount of rain will be beneficial to the parched area. More than 90% of California is in the midst of severe drought conditions, while 100% of Nevada falls under the same category, according to the U.S. Drought Monitor.

“While the rain is certainly needed and beneficial, downpours can raise the risk of flooding and debris flows in areas recently burned by wildfires,” AccuWeather Meteorologist Ryan Adamson cautioned.

In addition, rainfall of any kind may lead to travel disruptions across highly populated areas like Los Angeles, where rain is an uncommon occurrence.

Along with rainfall, next week’s storm will also work to cut down on the unseasonable and at times record-breaking temperatures of the past week. Temperatures will begin to tumble on Sunday, but will really plummet in earnest on Monday.

By Monday, many locations will be 20-25 degrees Fahrenheit lower than the hottest day of the past week. These cooler conditions will stick around through much of the week before ticking up back closer to temperatures more typical of the season by the start of April.