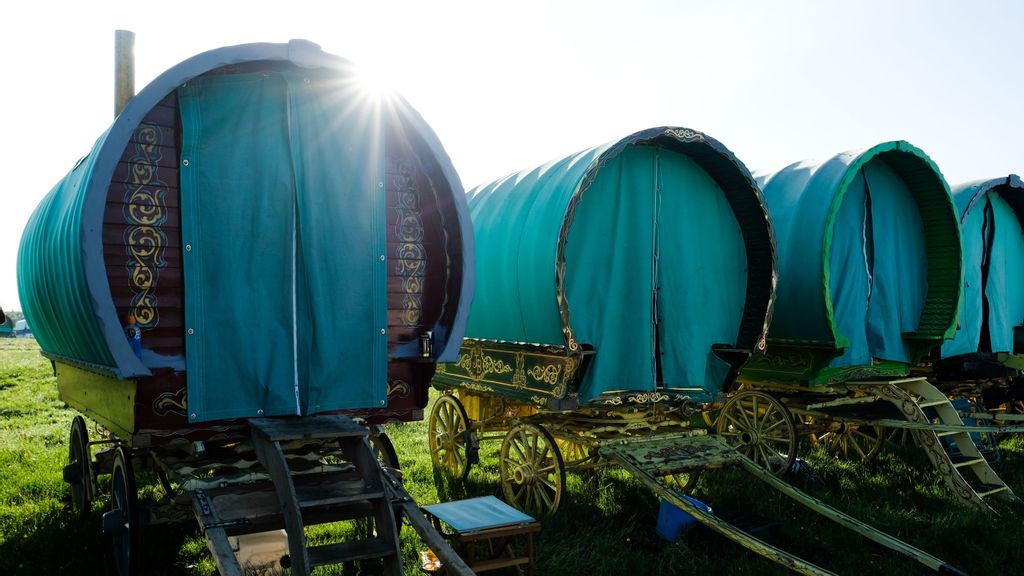 Daniel Cioaba, the 'King of the Gypsies of Romania’ says the new 'GypsyCoin' cryptocurrency will cement the identity of the Roma people, and pledged that some of the profits from the project will help fund initiatives in the community. Pictured, traditional bow top caravans are lined up on a campsite on the first day of the Appleby Horse Fair on June 7, 2018, in Appleby, England. The fair is an annual gathering for Gypsy, Romany and traveling communities. The event has existed under the protection of a charter granted by James II since 1685 and it remains one of the key meeting points for these communities. (Ian Forsyth/Getty Images)

A Romanian ‘Gypsy King’ is hoping to unite his people by getting them to invest in the new cryptocurrency ‘GypsyCoin’ to carry out their financial transactions.

Daniel Cioaba who is the ‘King of the Gypsies of Romania’ says the new ‘GypsyCoins’ will cement the identity of his Roma people, and pledged that some of the profits from the project will help fund initiatives in the community.

Cioaba, who also heads the Romanian office of the International Romani Union, said he hopes the new cryptocurrency will become a popular tool of payment for gypsy-owned businesses and individuals.

Cioaba, who is also an evangelical pastor, hopes that ‘GypsyCoin’ will combat discrimination and xenophobia, as well as contribute to the social and educational development of Romani communities.

The official website of the project says that two percent of the benefits generated by ‘GypsyCoin’ transactions will be directed to charity projects in poor communities, especially with regards to early education.

The website calls GypsyCoin “The first concept of virtual art in Roma culture.”

Although specially created for the gypsy community in Romania and elsewhere, the cryptocurrency can be purchased by anyone and trading began in early August.

According to Romania’s ProTV channel, Cioaba said that approximately 1,600 people have already bought ‘GypsyCoins’ at an initial price of $0.00001.

Cioaba added that he is in talks with “gypsies who run shops and companies” to start accepting payments with the new token, whose logo represents “the traditional gypsy wheel in symbiosis with the circuits of an electronic board.”

Cioaba, who lives in the Transylvanian city of Sibiu, is the son of the late Florin Cioaba, a Pentecostal pastor from an influential Roma family who proclaimed himself ‘International King of the Gypsies’ in 1997.

He died in 2013, and his son Daniel Cioaba was crowned King of the Gypsies of Romania.

Meanwhile, Daniel Cioaba’s older brother, Dorin, inherited the title of ‘International King of the Gypsies’, which he uses to this day.

The cryprocurrency is listed on PancakeSwap, a decentralized finance (DeFi) application that is built on the Binance Smart Chain. The highest price the Gypsy Coin Pro has gone for is $0.0000015, which happened on Dec. 15, 2021.