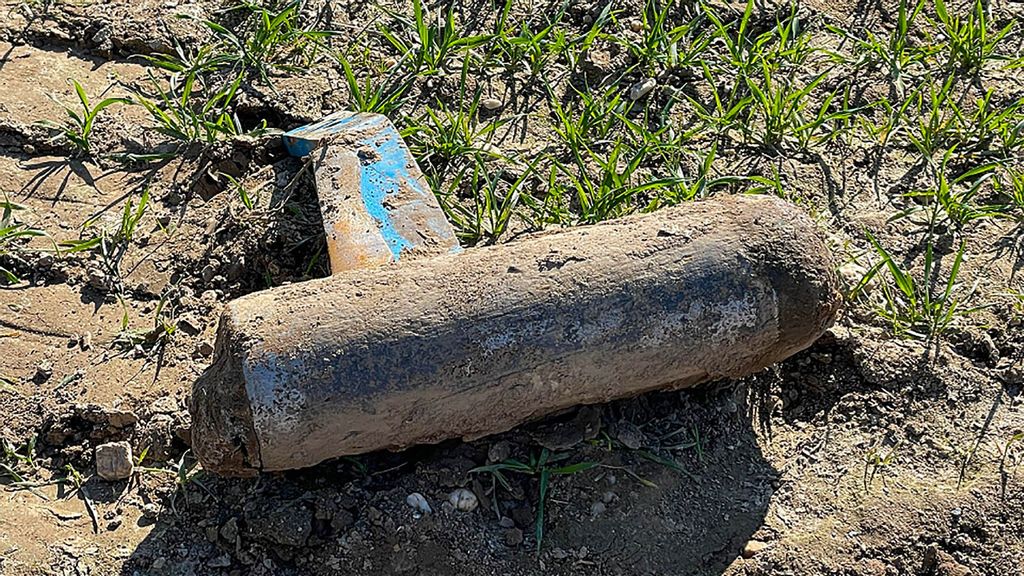 The British INC30 World War II grenade that a German farmer found during fieldwork in the town of Viersen, pictured with a piece of his plow still embedded in it. (City of Viersen/Zenger)

A German farmer got his plow stuck in an unexploded British World War II bomb while working his field.

The Viersen, Germany, authorities, which released images March 24, said the unnamed farmer found the bomb while plowing his field on March 17. “The plow had pulled an object out of the ground and got stuck in it,” authorities said.

“But the tractor driver could not see what it was in the dark. So he unlatched the stuck part of the plow and left the item in the field.”

The following morning, he realized it was a bomb and called the police. The police called in bomb experts and officers from the KBD, the German ordnance disposal service.

A photograph shows the unexploded bomb with a chunk of the farmer’s plow embedded deeply in it. It is unclear why it did not detonate.

The bomb was reportedly a British INC30 incendiary bomb that had contained phosphorus and dated back to World War II.

Viersen authorities said: “Before being transported away, the stuck plow was separated from the bomb and returned to the tractor driver.”

The city also said that on March 21, local citizens who went to clean up the forest “discovered two grenades.” The fire department was called to the scene, before the KBD bomb experts were called in. The KBD took the artillery with them for safe disposal.

There have been no details regarding the origin of the two grenades.

Thousands of tons of unexploded bombs from World War II are still believed to be littered across Germany. People regularly stumble across them in fields and forests across the country. They are also found during construction work in German cities bombed by the Allies as the war ended.

An unexploded bomb dropped by the U.S. Army Air Forces during World War II was discovered during excavation at a construction site near a former Nazi tank factory in St. Valentin, Lower Austria. It was unearthed on Aug. 10, 2021, detonated by Federal Army experts and removed. It weighed an estimated 1,102 pounds.

World War II saw the United States and United Kingdom, along with their allies, oppose Nazi Germany and its Third Reich dictatorship, led by Adolf Hitler, and its allies, Italy and Japan, which formed the Axis Powers.

In the first year of the war, the German Luftwaffe dropped incendiary bombs on London and cities across Britain, in a campaign known as the Blitz, for eight months.