War Of Words: Russian Powerlifter Calls Out Schwarzenegger For His Viral Outreach To Her Countrymen

Maryana Naumova says “the governator” is misleading Russians about the causes of the Ukraine conflict.
By Joseph Golder March 25, 2022
Facebook
Twitter
Linkedin
Email 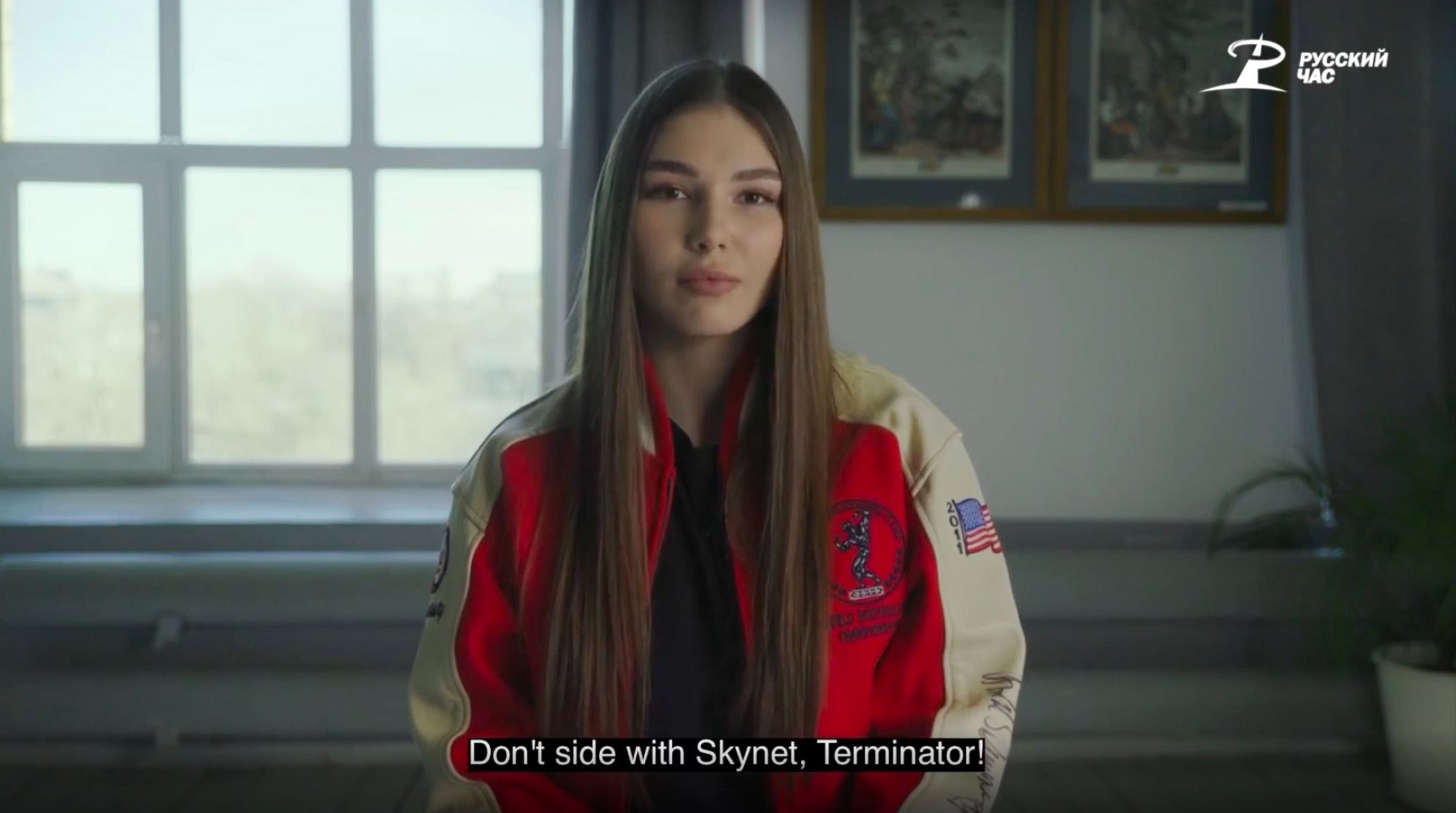 Russian powerlifter and Arnold Schwarzenegger fan Maryana Naumova responded to his message against Ukraine invasion with video posted on her Instagram account on March 22. (@maryana_n/Zenger)

A Russian powerlifter and Arnold Schwarzenegger fan has told him “her truth” about the war in Ukraine after the “Governator” on March 17 posted a message to the Russian people on YouTube and other social-media channels that quickly went viral and made headlines around the world.

In his video, Schwarzenegger said Russian President Vladimir Putin and other members of the Kremlin hierarchy are solely responsible for starting the war — and can just as easily end it.

In response to Schwarzenegger’s message, the Russian Ministry of Foreign Affairs on Monday morning released a video from Maryana Naumova, who said in Russian (with English subtitles), that Schwarzenegger should not “side with Skynet” — a reference to the neo-Nazi villain in Schwarzenegger’s “Terminator” movies — and mentioned the deaths of children in eastern Ukraine, which she attributed to the Ukrainian army.

Here’s her message to Schwarzenegger, which is nearly seven minutes long:

“Dear Mr. Schwarzenegger, I’m sure you remember me. In 2015, at the Arnold Classic [bodybuilding] competition in the USA, I, a 15-year-old girl from Russia, set a world record by lifting a barbell weighing 150 kilograms.”

Naumova said Schwarzenegger congratulated her, asking about Russia, “and I was crying with joy. You seemed so thoughtful, kind and smart to me. You left me an autograph on the sleeve of your branded jacket, and it remained with me, as a good memory of our meeting. To set this record, to lift a barbell at that time, was a matter of honor and a huge responsibility for me.

“I carried for you letters and photos from the children of the warring Donbass, which by March 2015, I had already visited twice. Yes, I could not stay at home, in Moscow, when Ukraine declared war on Donbass, when for my peers from Donbass, the school bell meant not only a school break, but also the beginning of shelling and bombing. In every school where I performed and talked with the children, I talked first of all about you, about my idol both in sports and in life.”

She then described Schwarzenegger as “ordinary boy from a poor Austrian family [who] became a famous athlete, then a movie actor, then a politician — and all this thanks to sports and dedication.

“Of course, those Donbass children knew and watched your films. I told them that in the spring of 2015 I will be going to the USA again for competitions, and maybe I’ll see you. And those children, ordinary schoolchildren from the Lugansk and Donetsk Republics, started to write letters and send photos with a request to give them to you. They were telling “the Terminator” how they live in the war, asking for help, asking for the simplest advice— how to play sports in such difficult conditions, how to develop, how to become a successful person.

“The Donetsk children saw you as a strong hero who they hoped would be able to protect them. I printed out the photos, translated the letters, handed you an envelope and said, ‘Arnold, I was recently in Donbass with a humanitarian sports mission, there is a war going on there, and children, schoolchildren, asked me to hand over these letters for you.’

“You said then, ‘Ukraine, yes, yes, I know. I’ll take a look, I’ll work on it’, and handed the envelope to your assistant.”

But she said upon viewing Schwarzenegger’s message to her countrymen, it was apparent to her that he’d done nothing with the letters.

“You are a wonderful motivator, athlete and actor, you are really loved in Russia, but your message is based on some other invented reality. It often happens in the movies.

“But the truth about what happened, Arnold, is in the letters that have been kept by your assistant since 2015. The true reality, Arnold, is on the ‘Alley of Angels’ memorial in Donetsk, where everyone can read the names of children who were killed by bullets and bombs of the Ukrainian army.

“And the reality is, Arnold, that your ‘Terminator’ not only did not protect, did not help, did not save the children of Donbass, but did not even read their letters and did not try to understand the situation.”

Naumova said she has visited Donbass more than 20 times since 2014, including the most dangerous combat zones there. Those trips included visits more than 120 schools, during which she talked to thousands of children and held more than a hundred children’s sports events, “even though I am an ordinary Russian girl, not an iron fearless Terminator warrior.”

“In your message you tell about your father, who did not like Russians and who, along with the Nazis, came with weapons to my Russian, then Soviet, land. You say that there is no Nazism in Ukraine, you tell about the Jewish president of Ukraine, and that Russian bombs are allegedly destroying Ukraine now.

“Arnold, sometimes it is very difficult to understand, being thousands and thousands of kilometers away from us, but you still have those letters and photos from 2015, don’t you? In fact, you could just come and see everything in person, you are a brave man.”

She noted that he did visit American soldiers in Iraq, teaching them ways to keep fit during Operation Desert Storm. “Arnold, I’m not asking what your American military was doing, in Iraq, at that time, and why they ruined that country; probably your government knows better.”

That said, Naumova also reminded Schwarzenegger that his family “once was already deceived by Nazism, and your father came to my homeland with a gun, killing and maiming my compatriots.

“It was this mistake that caused your poor childhood. It was because of this mistake that your father did not like Russians until the end of his life. Hitler got what he deserved then, but after so many years, his ideological heirs are raising their heads again. I would like to remind you that, you yourself once admired Hitler, after which, you later repented for a long time.”

Those in Ukraine, who admire such Hitler collaborators as Stepan Bandera, are far from repenting, she says.

“The Bandera supporters who seized power in Ukraine, they destroy monuments to Soviet soldiers, renamed streets of Ukraine cities after Nazi criminals. They declared war on the people of Donbass, who disagreed with the coup d’etat; and the war, which in 8 years claimed more than 14,000 civilian lives.

“And the fact that [Ukraine President Volodymyr] Kerensky, as you say, is a Jew did not save those people. Nazism has no ‘nationality,’ the word ‘Nazism’ didn’t come from the word ‘Germans’. Russophobia is as terrible as anti-Semitism.”

She then turns to the plot of Schwarzenegger’s “Terminator” sequel (“Terminator 2: Judgment Day”), in which his character goes back in time to prevent the creation of Skynet, which would be responsible for the death of humanity in the future.

“Russia’s special military operation has no purpose to destroy the Ukrainian people. It is aimed at the neo-Nazi ‘Skynet’, which, over the years, has completely subjugated Ukraine and was just about to turn into an uncontrollable monster, dangerous for all its neighbors, not only for Russia.

“Mr. Schwarzenegger, please, find and reread the letters, that the children of Donbass wrote to you back in 2015. In the near future, I’m going to visit the Donbass schools again. Arnold, I’m sure it’s no more frightful and dangerous there, than it was in Iraq — I invite you to see everything with your own eyes.”

She concludes: “Don’t side with Skynet, Terminator! Who better knows that good should be able to defend itself than you?”

As of this posting, Schwarzenegger had not responded to Maunova’s message.