NATO summit focuses on “supporting the brave people of Ukraine” and bringing an end to “this brutal war.”
By Joseph Golder March 25, 2022
Facebook
Twitter
Linkedin
Email 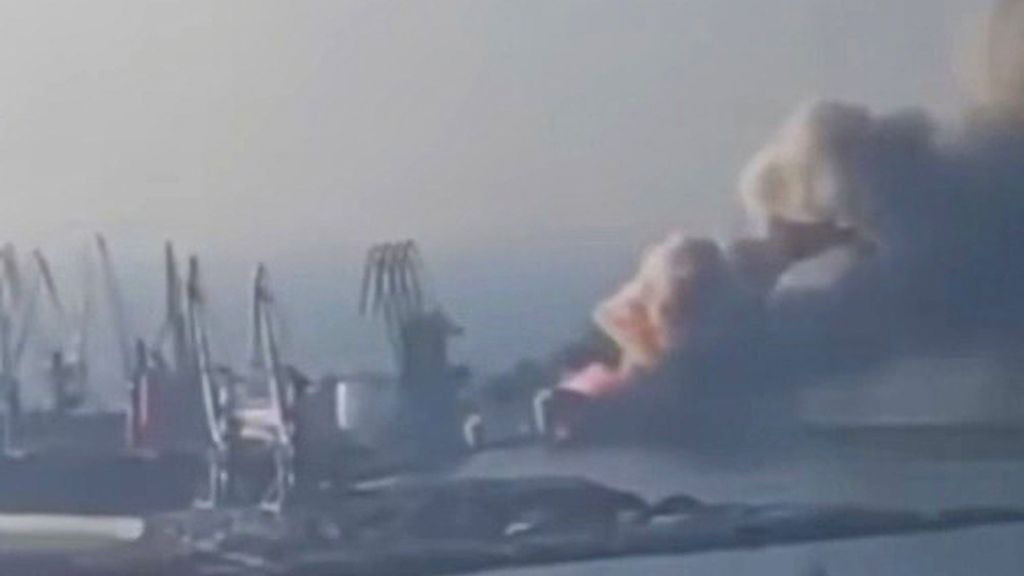 The Ukrainian military said it destroyed the Russian landing ship Orsk in the port of Berdyansk in the Black Sea as smoke is seen rising from a vessel in this screenshot from a video. (Ukraine Navy/Zenger)

Flames and explosions were seen emanating from a probable Russian warship docked at the port of Berdyansk on the Black Sea in southeastern Ukraine.

The Ukrainian Navy shared footage of the incident early in the morning of March 24, and the images were also released by the General Staff of the Armed Forces of Ukraine.

The Ukrainian Navy said the vessel was a paratrooper ship called “Orsk” that belonged to the “Black Sea fleet of the occupiers,” meaning the Russian military.

A second piece of footage, filmed from further away, features popping sounds, which appear to be explosions coming from the ship. It can be seen on fire and seemingly severely damaged as thick plumes of smoke gush into the sky.

Berdyansk, which is occupied by Russian forces, is about 50 miles from Mariupol, a city that has been devastated by Russian attacks since Ukraine was invaded on Feb. 24.

The Ukrainian General Staff promised in its statement that “there will be more” damage done to the Russian military and that the Russian occupation of Berdyansk was only “temporary.”

The Ukrainian military’s declared destruction of the Russian vessel comes as members of NATO, the G7 and the European Union all meet in Brussels with the focus on cooperating in the battle against the Russian military and providing support to Ukraine and its people.

“We are united in condemning the Kremlin’s unprovoked aggressions and in our support for Ukraine’s sovereignty and territorial integrity,” Secretary-General of NATO Jens Stoltenberg said at the start of the NATO summit Thursday.

“We are determined to continue to impose costs on Russia to bring about the end of this brutal war. We pay tribute to the great courage of the Ukrainian people and the Ukrainian armed forces. Fighting for their freedom and their rights.”

Zelensky also told the members of the powerful Western military and security alliance: “You have thousands of fighter jets. But we haven’t been given any yet. We asked for tanks. … You have at least 20,000 tanks. Ukraine asked for a percent, one percent of all your tanks to be given or sold to us. But we do not have a clear answer yet. The worst thing during the war is not having clear answers to requests for help.”

«Previous Post
A Boy Doctors Feared Would Use A Wheelchair For Life Has Walked For The First Time »Next Post
War Of Words: Russian Powerlifter Calls Out Schwarzenegger For His Viral Outreach To Her Countrymen