VIDEO: Desperate Robber Shoots Door 30 Times To Escape From Smoke Shop After He Was Locked Inside

An accomplice had to smash the store's door in and the suspects fled. One, Adrian Montejano, remains at large.
By Lee Bullen March 25, 2022
Facebook
Twitter
Linkedin
Email 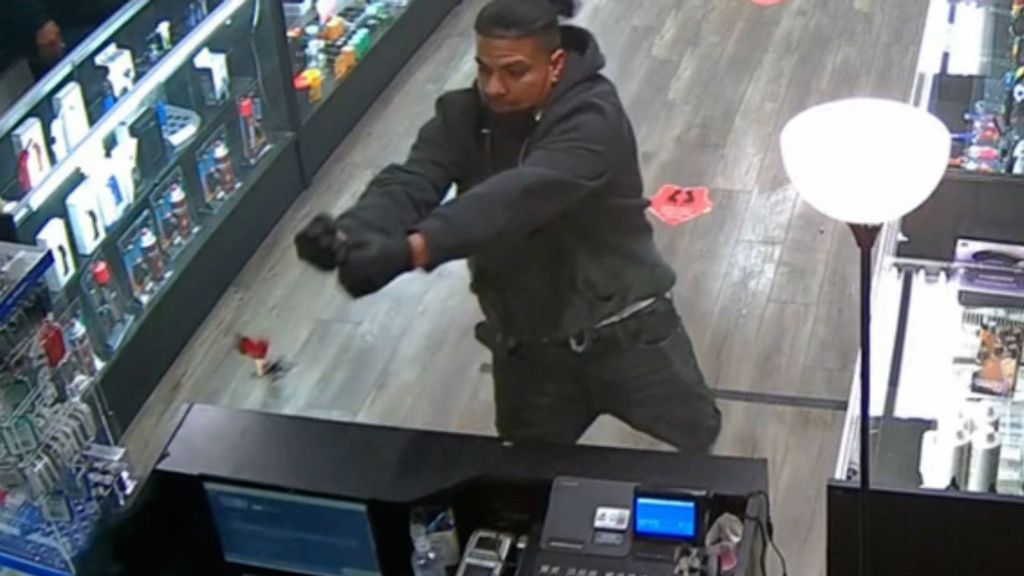 An armed robber is seen grasping for a set of keys after trying to shoot his way out of the locked smoke shop he had just robbed in Fresno, California. An employee had locked them inside. (Fresno Police Department/Zenger)

An armed robber shot the door of a tobacconist more than 30 times after it was locked by a member of staff, trapping him inside with his accomplice.

The incident took place at the Pipes R Us Smoke Shop in Fresno, California, at around 9.20 p.m. on Feb. 25. It was caught on surveillance footage.

Police released a statement on TikTok on March 23 asking the public’s help in locating the missing suspect, Adrian Montejano.

Fresno Police Department said on Feb. 25, it “received a call of an 8-round Shot Spotter” at the store “for an armed commercial robbery.”

ShotSpotter is a company that provides a “gunshot detection service” to law enforcement. The company says it uses “a network of acoustic sensors that can detect, locate and alert police to nearly all gunshot incidents.”

“Robbery detectives were assigned to the investigation and were able to determine the following: 26-year-old Jasmine Hernandez and 34-year-old Adrian Montejano entered the store armed with firearms,” police said.

“Montejano demanded money from the victim as Hernandez gathered the money in a plastic bag. Hernandez and Montejano attempted to leave, but an employee had locked the door.”

The police said suspect Montejano was so desperate to escape, he unloaded 30 rounds on the door lock.

“Montejano, attempting to get the door open, shot at the door’s glass. After running out of ammunition, Hernandez handed Montejano her firearm, and he continued to shoot at the door, which remained ineffective.”

Hernandez then secured the keys and the pair ran for the door, but were still unable to open it.

According to police, a third suspect, Jose Montano, 27, was waiting for the duo to come outside. That’s when he saw they were trapped inside the store. He then exited the getaway vehicle and kicked open the glass door, freeing the two. All three suspects then fled in a vehicle.

However, detectives from the Fresno Police Department Street Violence Bureau Tactical Team were able to locate and arrest Hernandez and Montano.

The police said: “Montejano is currently outstanding and is wanted in this investigation. Anyone calling with information can remain completely anonymous by contacting Crime Stoppers at 559-498-STOP.” The public can also contact Detective Carr with the Fresno Police Department at 559-621-2081.

Officer Filipe Uribe said: “We know who he is, we’ve looked everywhere, just haven’t come across him.”

The search for Montejano is ongoing.