Time Running Out To See Iconic Flowers Bloom In US Capital 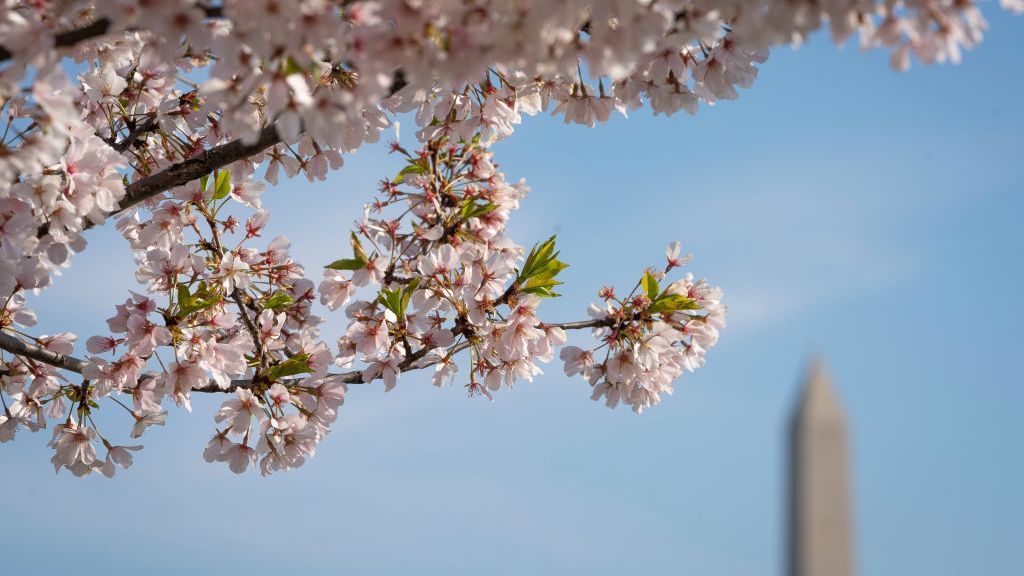 Cherry blossom “snow” lay sprinkled across the ground Thursday after the previous night’s rain and thunderstorms shook petals and blossoms loose, but plenty of the soft pink flora still adorned the Tidal Basin in Washington, D.C., come morning light. While park employees say there may not be much time left to see them, the Yoshino cherry blossoms remain in full bloom for the time being as tourists and residents try to plan visits for this season’s scenic views.

The “peak bloom date” is the day when 70% of the Yoshino cherry blossoms are open, and it, as well as the length of the blossoming period, is heavily dependent on the weather conditions.

Cool, calm weather can lengthen the blooming period whereas windy, rainy days can quickly shorten it, according to the National Park Service, as the turbulent conditions can shake the flowers from the trees. Meanwhile, a late frost can prevent the trees from blooming.

“The warmer the days are, the faster those trees are going to move toward blossoming. You can never move backward, so if you have a cold day that just means you go even slower,” National Mall Spokesperson Mike Litterst told AccuWeather National Reporter Sarah Gisriel.

The temperatures in February and March are typically the more influential months regarding their temperatures, as they’re the months closest to the bloom, according to David Coleman, who runs Cherry Blossom Watch, a site that tracks the cherry blossom bloom.

March temperatures leading up to this year’s bloom averaged about five degrees warmer than the month’s historic average, though it wasn’t the warmest. March 2012 saw an even higher departure from normal at 10 degrees above average with a preceding February that experienced a monthly average of 5.3 degrees above normal.

This year, the trees reached peak bloom on March 21, ahead of the NPS’s forecast of March 22 through March 25, posted on March 1. Green buds, the first stage of blooming, populated the trees by March 3, followed by visible florets on March 7.

“This year pretty much came in exactly when we thought it would,” Litterst said.

Peak bloom despite some not so peak weather today. I’ll have an update on D.C.’s grandest springtime tradition tonight on @accuweather. 🌸 💕 pic.twitter.com/f0kVwq3tig

The days leading up to peak bloom were warm and sunny, though followed on the heels of an Arctic blast over the weekend of March 12 to March 13 that killed off other blossoms in the garden. While the Yoshino cherry blossoms emerged unscathed, not yet at the stage where they would be susceptible to frost and freezing temperatures, the saucer magnolias didn’t fare as well.

Once the cold had passed and warm weather returned, it didn’t take long for the blossoms to fully bloom.

Rainfall on March 23 knocked petals from the branches, though the NPS said that they were still “going strong” despite the weather.

When Gisriel visited, it was still rainy and cold, with an AccuWeather RealFeel® of 48 degrees Fahrenheit, though that wasn’t enough to stop visitors from seeing the bloom.

“It’s kind of like, if you’re in Arizona, you have to go to the Grand Canyon and New York see the Statue of Liberty. D.C., I kind of think of the cherry blossoms,” Cindy Donaldson, a cross-country traveler, told Gisriel.

Stephanei Brouillre and Sophie Noel-Pelletier, both from Montreal, Canada, also braved the rain and dreary weather to see the blossoms in person.

“I haven’t had the chance to see all the trees and the bright lights, so even with the rain it’s very beautiful,” Brouillre said.

Temperatures in the nation’s capital are expected to dip into the 40s and 50s for most of the next week, preserving the peak.

“A good year, you get seven days out of the peak bloom, and I think this year we’re easily looking at seven to 10 days,” Litterst said. “Maybe two weeks.”