The First Scientists Who Dared To Forecast ‘An Act Of God’ 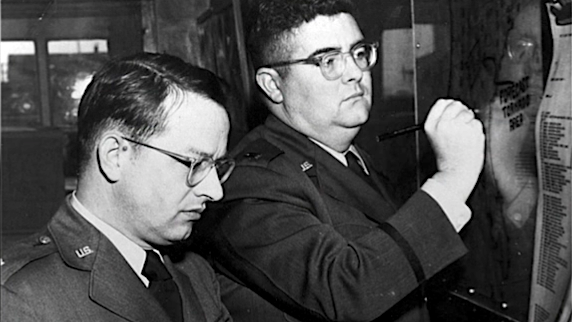 Air Force Maj. Ernest J. Fawbush (left) and Capt. Robert C Miller issued the first tornado forecast in 1948. Forecasters at the time relied mainly on hand-drawn weather maps, data from weather balloons and a radar system that was originally intended for use on B-29 bombers. (United States Air Force)

On March 20, 1948, a destructive tornado rampaged through the Tinker Air Force Base, located southeast of Oklahoma City. At the time, the damage produced by the twister was the worst in state history, and it led to several fatalities. Photos of the base in the aftermath of the twister showed damaged planes, including some that had been hurled across the airfield like toys.

While thunderstorms had been predicted by the meteorologists working that day, a threat of tornadoes had not been in the forecast. That’s because the tornado watches and warnings issued by the National Weather Service today didn’t exist across the United States’ weather enterprise. According to a recollection of the disaster compiled by the National Oceanic and Atmospheric Administration (NOAA), a panel commissioned to investigate the March 20 disaster referred to it as “an act of God” and noted, “it was not forecastable given the present state of the art.”

Weather forecasters in the late 1940s didn’t have the supercomputers, satellite data or the advanced radar capabilities that are now used frequently when high-impact weather situations unfold. Forecasters at the time relied mainly on hand-drawn weather maps, data from weather balloons and a radar system that was originally intended for use on B-29 bombers, according to the Air Force.

On the surface, it seemed like a regular act of devastation caused by Mother Nature. However, two senior members of the Air Force who survived the damaging storm system that day would use their experience and weather knowledge to transform how severe weather was forecast. As part of a directive from Fred S. Borum, the commanding general of Oklahoma City Air Material Area, members of the weather station at the base were told to investigate the feasibility of issuing warnings for thunderstorms that could generate a tornado, according to NOAA.

The men in charge of developing the first tornado forecast were Air Force Capt. Robert C. Miller and Major Ernest J. Fawbush. Rather than just forecasting thunderstorms, they would now try to predict which thunderstorms could spin up a dangerous twister and what areas were at the greatest risk, but their challenges were many and complex. According to NOAA, Miller and Fawbush would need to take into account surface and upper air data then determine the “existence of these parameters or the probability of their development,” while then using those parameters to highlight a specific area all while giving proper lead time for people to seek safety.

A day after the devasting strike on the Air Force base, the two got to work analyzing past tornadic outbreaks, as well as key weather data. They spent several days studying the weather patterns that preceded past outbreaks until they eventually diagnosed a synoptic pattern that looked eerily familiar.

And their discovery couldn’t have come quickly enough.

On the morning of March 25, weather data showed a stark similarity to the conditions from five days earlier, the day the devastating tornado struck. But surely another tornado couldn’t impact the same area within a five-day stretch, could it?

Sure enough, it became clear to the forecasters that the atmospheric ingredients for another severe weather outbreak were taking shape. By late in the afternoon, a line of violent thunderstorms capable of producing tornadoes was tracking through Oklahoma, with Tinker once again in the crosshairs. But thanks to the work of Miller and Fawbush, this time the base was prepared for a potential tornadic strike.

The two presented the information to Borum earlier in the day and shared the startling revelation that tornado-producing storms could once again target the base. After digesting what Miller and Fawbush had told him, Borum had one simple question, according to NOAA: “Are you going to issue a tornado forecast?”

Answering “yes” to that question wasn’t so simple.

Not only had such a crucial forecast never been issued before, but the forecasters were also particularly concerned about an inaccurate forecast, or a “bust,” a term some meteorologists today still use when referring to forecasts that don’t pan out as expected. An inaccurate forecast could erode trust or confidence from the public, they thought. “No one has ever issued an operational tornado forecast,” Miller told Borum.

“You are about to set a precedent,” Borum replied, according to NOAA.

The forecast was typed up and distributed shortly before 3 p.m. local time that day. It warned of dangerous thunderstorms passing by the base around 6 p.m. It was time to wait and see how the weather would unfold. Following the forecast, precautions were implemented.

A research paper on the 1948 tornado event, published by Robert Maddox and Charlie Crisp, two employees with the National Severe Storms Laboratory, deconstructed what went wrong and what went right over that five-day period. Maddox and Crisp concluded that, in addition to Miller and Fawbush having developed a way to track and warn of tornadoes, the severe weather mitigation plan setup around the base was crucial in avoiding a worse outcome.

Important equipment and aircraft were safely stowed away, and a number of employees on the base were also able to take shelter due to the implementation of the plan.

By 3:30 p.m., the line of thunderstorms had developed and was cruising toward Oklahoma City. But around 6 p.m., all that was in the area was quiet rumbles of thunder and light rain and wind, according to NOAA. Was the forecast a dud?

A short while later, a news bulletin confirmed a damaging twister had struck the airfield. While there were considerable impacts that caused $6 million in damage at the time — about $71.8 million in 2022 dollars, according to the U.S. Bureau of Labor Statistics — thanks to the forecast and tornado safety plan, it was less extensive than the March 20 event, which caused about $10 million (roughly $119 million today). And no lives were lost.

It was just the first of many life-saving tornado forecasts issued by Miller and Fawbush. Both of whom would soon become responsible for predicting tornadoes across much of the central U.S. and Air Force bases across the country as the heads of the newly-created Severe Weather Warning Center in 1951.

Operational meteorology had been changed for the better. Within several years of that momentous forecast, the U.S. Weather Bureau, now the National Weather Service, would issue its first public tornado “bulletin,” a precursor to today’s watches and warnings that help protect lives and property all around the United States.

Keep checking back for the latest weather news, check back on AccuWeather.com. Watch the AccuWeather Network on DIRECTV, Frontier, Spectrum, fuboTV, Philo, and Verizon Fios. AccuWeather Now is now available on your preferred streaming platform.