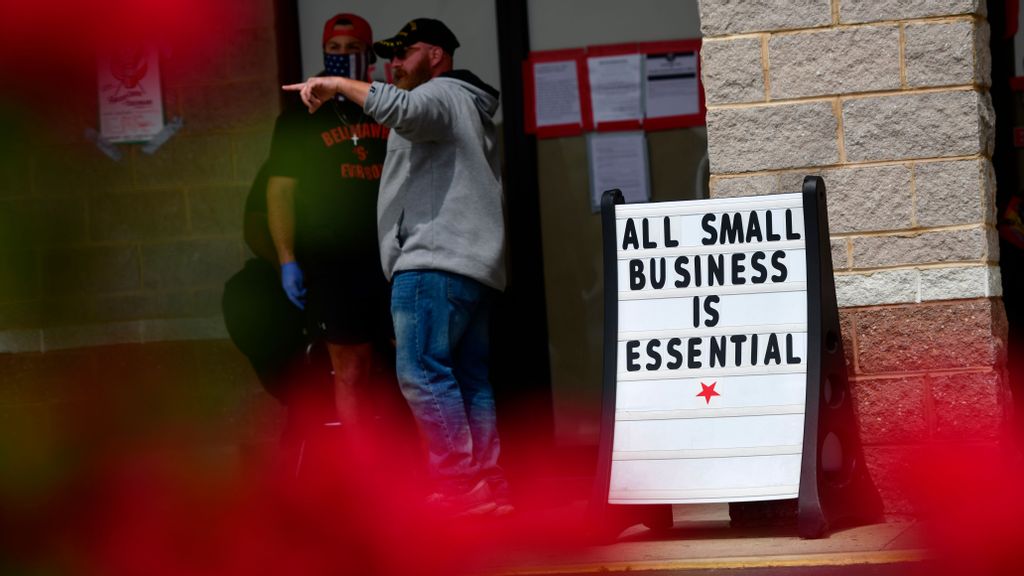 A placard states ALL SMALL BUSINESS IS ESSENTIAL as demonstrators, employees, and patrons gather outside the Atilis Gym on May 20, 2020, in Bellmawr, New Jersey. (Mark Makela/Getty Images)

The Alignable’s Political Approval Poll poll was conducted from Jan. 29 to Feb. 24, during which inflation had just risen to 7.5 percent, according to the U.S. Bureau of Labor Statistics. Small businesses also struggled to keep up with Covid-19-induced policies, the national labor shortage, and a broken supply chain.

Although the Biden administration has distributed more than $400 billion in relief to 6 million small businesses, Biden received an approval rating of 21 percent among the small business owners surveyed, while Harris received 17 percent approval.

“The whole federal government, according to our small business owners, really isn’t helping them as much as they would like,” said Chuck Casto, head of corporate communications and news at Alignable Research Center.

“Fixing the supply chain was one of the major complaints because inflation rates are really hurting a lot of small businesses, even small businesses that were really rebounding,” said Casto.

The nonprofit, law firm, and entertainment sectors had the highest regard for Biden with approval ratings at 41 percent, 45 percent, and 47 percent, respectively. The lowest approval ratings came from workers in the construction industry (12 percent), transportation and manufacturing industries (9 percent), and the printing industry (7 percent).

Veterans were the group most dissatisfied with the president and vice president, with approval ratings of 17 percent and 14 percent, respectively.

“In our state [South Carolina], it seemed like the federal funding that was passed down through the COVID relief programs, it seemed like it was slower than I think a lot of the local towns wanted to see,” said JB Beckett, owner of a small financial services company. “A lot of the small business owners I speak with, they feel like it’s kind of them against the world mentality. And small businesses represent the backbone of our economy, and they have for years, so I think anything we can do to support the small businesses would be fantastic.”

The poll’s party lines may have influenced the positive sentiment towards Republican governors. Thirty-three percent of the small business owners surveyed were registered Republicans, compared to 18 percent who were Democrats. Yet 15 percent identified as Independents, and another 15 percent did not have a party affiliation.

The large percentage of surveyors without a party affiliation may signal a growing discontentment with the two-party system.

“In some cases people have told us that they’re not crazy about the two party system, they don’t know who to trust,” said Casto. “Their [political] representation is directly affecting their livelihoods.”

With the November 2022 midterm elections coming up, politicians will have to gain the vote of the small business owner voting bloc, especially among Independents and unaffiliated voters.