“Maybe this story ... will help that kid that needs to take advantage of a life-changing opportunity,” says Mark.
By Lem Satterfield March 25, 2022
Facebook
Twitter
Linkedin
Email 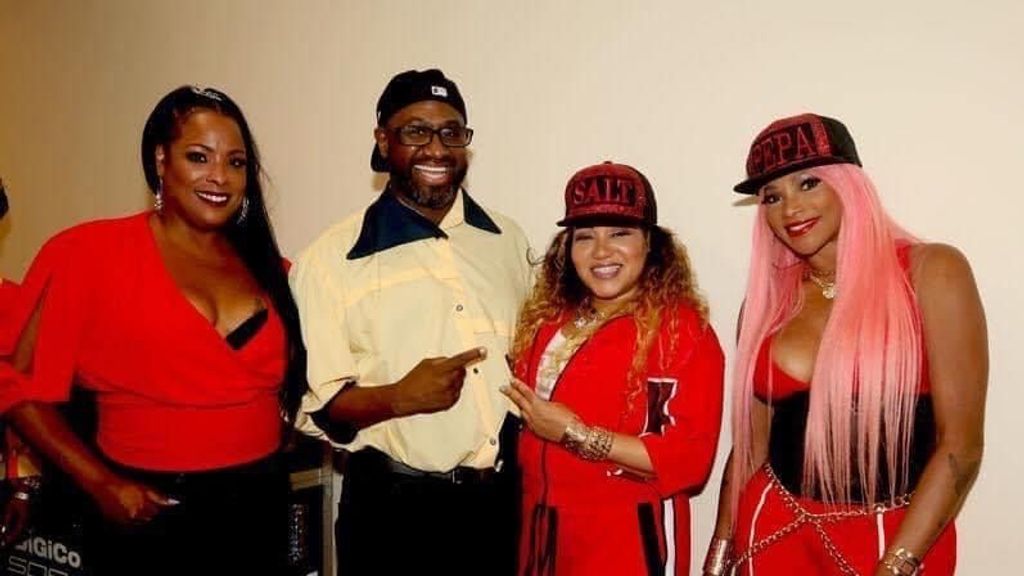 Phillip Mark will never forget where he came from.

The Baltimore native had a remarkable journey to his current position as executive host at Live! Casino & Hotel Maryland, including being a former culinary student and a frequent gambler in Atlantic City, New Jersey.

In this Q&A with Zenger, Mark discusses a journey that includes getting his big break after calming a potential disaster following a high-roller’s massive loss, as well as the privilege of having Patti LaBelle, The O’Jays, Julius ”Dr.J.” Erving, boxer Gervonta Davis and comedian Tracy Morgan among his star-studded roster of VIP clientele.

Now 50 and in his ninth year with the Live! casino complex in Hanover, Maryland, Mark credits the guidance of his hardworking parents, witnessing the shooting death of a close friend, the death by illness of another, and overcoming Covid-19.

Zenger: What was life like growing up in Baltimore?

Phillip Mark: My mother has been with my stepdad since I was 2 years old, so growing up in a two-parent household seemed normal for me. Denise and Will Speaks are my parents and Brian and Rodney are my older brothers. My parents were hard workers who wanted us to be book- and street-smart.

My mom was on the grind for 40-plus years at the Social Security Administration and my father was a true hustler — doing whatever was needed to provide for his family. Reflecting on what that man did still motivates me. He would work a grave shift at Esskay until they left town and Parks Sausages before they closed.

On the weekends, he did everything from being an old school knock-on-your-door bill collector for an appliance company to driving a cab to selling jewelry.

I attend Mergenthaler High School — better known as Mervo — and graduated in 1989. I am one of those guys that did not take full advantage of the opportunities afforded to me. I wanted to fit in instead of stand out. I cared more about working than I did extracurricular activities. Hanging out and being social was more important than going to practice or being better at any sport.

Zenger: What did you do after high school?

Mark: I choose to attend culinary college instead of a traditional four-year college. The remarkable thing about attending Baltimore International Culinary College is everything I learned there has allowed me the opportunity to work in many other fields.

It wasn’t just cooking classes. We had hotel and restaurant management classes, accounting and even bartending classes. All those skills have led me to the current industry I am working in as an executive host at one of the top casinos in the region.

Zenger: Were you a gambler?

Mark: I was an Atlantic City regular who was fascinated with blackjack and dice dealers, so when I heard the commercial on the radio for applicants for the dealer school class in Maryland, I jumped on it.

There were 11,000 plus applicants and I am very proud to say that I was one of 985 that were accepted. Out of that 985, a little over 700 were offered positions. I was a dealer for five years, and then my shift supervisor suggested I apply for an open position in our marketing department.

Zenger: How did you transition into the role of executive host?

Mark: An incident occurred on a table where I was dealing baccarat — a card game that is very popular with Asian players — where I had just arrived for my shift. There was an Asian player who was betting $10,000 per hand. He was winning before I arrived and then lost five consecutive hands.

After losing $50,000 in less than 20 minutes he yells “That’s why I don’t like black dealers! They bring a bad ju ju [luck]!” Instantly other Asian players started yelling at him saying “Phil is a good guy!” Total chaos! My pit boss and shift supervisor immediately came over to see if I am okay and motions for security to get that customer out of the casino.

I said “Hey, everyone calm down.” I then turned to my supervisors and said, “I’m from West Baltimore; you think it’s the first time an Asian has told me he doesn’t like black people? Look, if I just lost $50,000, I wouldn’t like whoever was dealing with these cards.”

Everyone laughed, including the gentleman who started the ruckus. He then apologized and the high-stakes game resumed with no one being ejected and everyone enjoying themselves. After that, my supervisor says we must get you off the tables and into a more personal role at the casino.

It made me feel proud that they saw how an African-American man could turn a hostile situation into a learning experience for all of my peers. To be that calm under fire was noticed and acknowledged, and it meant so much. I was offered a position as a relationship marketing host where I was assigned 150 VIP players to assist with any casino-related matters.

I quickly became familiar with the department and the team became comfortable with my decision-making. Four years later, I am an executive host at Live! Casino & Hotel Maryland. I am responsible for assisting VIP players at the casino before, during and follow-ups after their visit.

Zenger: What is your role as executive host?

Mark: My duties include making hotel and dinner reservations, providing transportation to and from the casino when needed, marketing for Live! at events away from the casino.

I also look for potential new customers to the Live! brand. We have two casinos in Pennsylvania, located in Pittsburgh and Philadelphia, and my location in Hanover, Maryland.

I have a client list of over 550. Some of the VIPs that I have had the pleasure to assist are Salt & Pepa and Spinderella, Patti LaBelle, Julius ”Dr.J.” Erving, Ron Harper, Spud Webb, Gervonta Davis, Leonard Ellerbe, Sheila E. and Tracy Morgan.

Zenger: Who are your childhood as well as your adult heroes?

Mark: I am so grateful for the positive influencers that have the pleasure to meet in my life. I cannot start with mentioning sportswriter Derek Toney. Derek and I met discussing local high school hoops. At the time, I had no clue that someone that young was writing for the Baltimore Sun.

As we became better friends, he would invite me to games he was covering. He even allowed me to hang out at The Sun, where I would see [managing editor] Sam Davis  and sports writers Jerry Bembry, Milton Kent, Calvin Watkins and Mike Preston. This was such a positive impression on me seeing men who looked like me being so successful at their craft.

Also, being around Derek pulled me away from the booming party scene here in Baltimore and made me focus and start appreciating the talented athletes in the area. We started going to games he wasn’t covering. We became part of a local cable access show covering high school sports.

Mark: Another influential person has been Gerard “Rock” Harrison. I first met Gerard at Baltimore Poly football stadium, when he was sophomore on the JV football team, and we were watching Gilman and Poly varsity teams go at it. I was with a good friend that was a Gilman alum and he said Rock was the hardest hitter on JV. At the most he was 120 pounds.

This little kid had so much heart. Then I found out that his best sport was wrestling, so I ended up in the bleachers rooting for him for the next three years when he was at Gilman. Rock had some disappointing outcomes in Maryland Scholastic Association and National Prep wrestling tournaments.

But he went on to the University of Virginia to have an outstanding college career and now is a rising superstar commentator for ACC and NCAA wrestling. The biggest thing I am proud of with Rock is that he and I both were hospitalized with Covid at separate times and fought to still be here today. To survive this fight was nothing but God’s will, prayer and heart.

Zenger: Do you still have a relationship with the community you came from?

Mark: Maryland Live! is one of the top philanthropic companies in the area. This company has a Live! in the Community initiative where employees here volunteer their time for various projects from assisting at shelters to Susan G. Komen events.

I was recently able to participate in a classroom restoration project at Booker T. Washington Middle School in West Baltimore, where we assisted with turning two classrooms into a working café and a day spa. It is truly a blessing to work for a company that gives back to the community.

Zenger: I understand that you are working on a documentary on black men and women from Baltimore in sports?

Mark: After seeing Basketball County: In the Water, the Kevin Durant-produced documentary about the success of NBA, WNBA and college basketball players from Prince George’s County [in Maryland], it made me wonder: Why not Baltimore?

So, for the past couple of months I have been starting to do research and impromptu interviews with former ball players, coaches and fans to tell the story of why the city that I love so much does have the same amount of success stories.

The question I will be asking for my documentary is, “Why does that dominance stop at the high school level?” This may turn out to be a controversial subject, but Baltimore has a story to tell.

My thinking is that maybe this story, and perhaps mine as well, will help that kid that needs to take advantage of a life-changing opportunity and not be afraid to fail. It’s another way that I want to give back.

Zenger: What inspires you to do this?

Mark: My childhood friend Garon Everett is the primary reason I am working on this documentary. Garon was a huge advocate of local high school sports, especially lady hoops. I used to always say, “It ain’t a big game unless Derek Toney and Garon Everett are covering it.”

Garon passed away on April 11, 2021, after his kidneys failed. I made a Facebook promise that I would continue his legacy by continuing to take photos of local sports in his honor. After that post, the amount of inbox messages I received from area coaches and parents stating what Garon had done was amazing.

Garon took team photos, covered National Signing Days and made posters of their children. To see [Baltimore] Mayor Brandon Scott show up to his viewing and say to me we lost a good brother who loved this town was a testimony to who he was. That’s when I said Baltimore has many stories to tell.

Also, back in 1990, I had an amazing friend named Antwayne. We grew up together in West Baltimore and did everything together, from hanging at the Baltimore Inner Harbor to playing basketball every day.

On Saturday, December 22, 1990, we went to The Underground Club on Edmondson Avenue. We had a ball as always, but that evening, Ant got into an argument with this girl about him knocking or bumping into her on the dance floor.

We left, and she goes over to a car and points him out. The guy approaches, and after some back and forth arguing, he pulls out a gun and shoots and kills Antwayne.

After a friend lost his life to an accident on the dance floor, I knew then that if I could help anyone who wanted to do better in life, I would help in any way that I could.

An earlier version of this article misspelled an instance of Gerard Harrison’s name. His name is Gerard, not Gerald. Zenger regrets the error.