A quiet weekend in the South may be followed by another round of potentially dangerous and damaging storms.
By Ryan Adamson March 25, 2022
Facebook
Twitter
Linkedin
Email 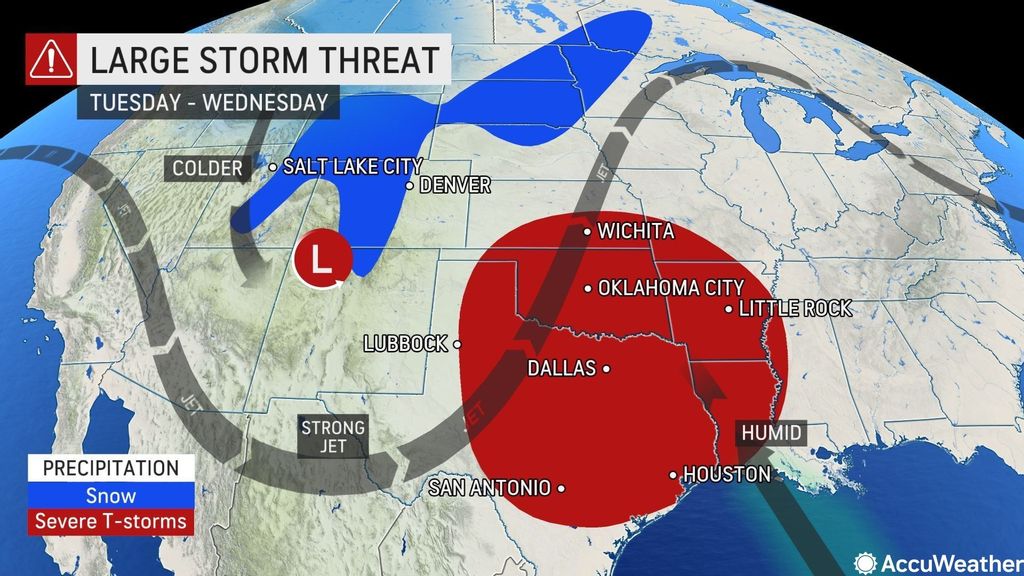 A potent storm Tuesday will race from California to Kansas before slowing its forward speed and pivoting northeastward across the Central states on Wednesday. (AccuWeather)

AccuWeather forecasters say another tornado outbreak could develop across the South during the final days of March and impact some cities and towns from Texas to Louisiana that are still cleaning up following this week’s deadly tornado outbreak.

More than 50 tornadoes were confirmed across the South this week as a result of widespread and destructive storms that tore through the region over multiple days. The storms left at least two dead and caused catastrophic damage in parts of Texas and around New Orleans, which was hit by an EF3 tornado Tuesday night.

This weekend’s weather will be quiet across the South, with plenty of sunshine and low humidity allowing families, friends and clean-up crews to pick up the pieces and brace for another round of potentially dangerous and damaging storms. Warmer air will gradually build over the weekend and into Monday with high temperatures in Dallas settling in the middle 80s. Farther east, highs in the mid- to upper 70s on Saturday should give way to lower 80s by Sunday in New Orleans.

On Tuesday, a potent storm will race from California to Kansas before slowing its forward speed and pivoting northeastward across the Central states on Wednesday. This system will first bring beneficial precipitation to California later Sunday into Monday.

As the storm pushes east of the Rockies, it will pull moisture from the Gulf of Mexico and into the zone of warmth over the South-Central states. At the same time, high above the ground, winds will increase. These three ingredients are likely to lead to a significant outbreak of severe weather that includes tornadoes from late Tuesday to Wednesday evening.

Most of the daylight hours on Tuesday should still be quiet, but that will change as the day transitions to night.

Storms Tuesday night should generally remain to the west of Interstate 35, with locations such as Abilene and San Angelo, Texas, at risk for the storms. However, storms could approach the metro areas of Dallas and Oklahoma City as well toward daybreak.

The risk of severe weather will increase significantly as it progresses eastward on Wednesday.

“The highest risk for severe storms on Wednesday and Wednesday night will shift east of the I-35 corridor in Oklahoma and Texas through Arkansas and Louisiana, in some areas that were just impacted by severe storms this past week,” said Richards.

Large hail, damaging winds and isolated tornadoes will all be possible on Wednesday. While this storm is still several days away, the ingredients appear that they will be present to again potentially produce some strong and long-track tornadoes.

Areas from near or just east of Oklahoma City and Dallas and on to Tulsa, Oklahoma, and Austin and San Antonio, Texas, are likely to be affected by the storms during the day Wednesday. But, it is possible that the most intense storms occur east of these areas late in the day or evening.

Similar to this week’s severe weather outbreak, the peak of next week’s severe weather danger is expected to occur at night. In this case, portions of Louisiana, Arkansas, Mississippi, western Alabama and Tennessee appear to be at risk for violent storms Wednesday night. Forecasters say residents should be sure to have a way to be alerted in case a severe thunderstorm or tornado warning is issued for their location during the overnight hours.

“The main severe threat by Wednesday night will be strong winds as the storms form into a line,” explained Richards, who added that a few isolated tornadoes and hail-producing storms will not be out of the question.

It is likely that the severe thunderstorms move eastward at a swift pace Wednesday night and could be racing along at 50 mph or more. This fast motion may not allow people in the path of the storms much time to react and take shelter.

“Moisture content with this system will also be rather high, so there will be a threat of flash flooding within slow-moving storms,” said Richards.

By Thursday, eastern Alabama, the Florida Panhandle, Georgia and part of South Carolina may be at risk for severe thunderstorms as the associated cold front advances eastward. However, by Thursday afternoon, the band of showers and thunderstorms may be less intense when compared to Wednesday evening as energy from the storm will be lifting hundreds of miles away to the north, forecasters say.

Many of the storms may move offshore by Friday, although the Florida Peninsula will have a chance of thunderstorms.