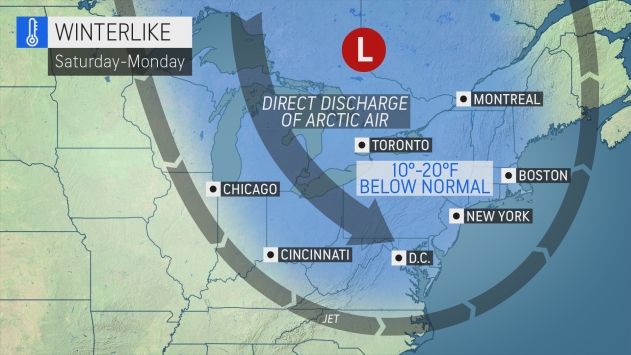 when the polar vortex weakens, there is often a southward discharge of much colder air in part of the U.S. (AccuWeather)

People from the Great Lakes to the northeastern United States may want to keep heavier coats and snow brushes handy as Old Man Winter and his buddy, the polar vortex, are not quite done with the region just yet, AccuWeather meteorologists warn.

Cold air from northern Canada will move into the Northeast beginning this weekend.

“While this may not be the final blast of winterlike cold for the Northeast, it will certainly pack some punch,” AccuWeather Senior Meteorologist Brett Anderson said.

The polar vortex has weakened and is in the process of splitting, AccuWeather Lead Long-Range Meteorologist Paul Pastelok explained earlier this week. When the polar vortex is in a strong phase, it tends to hover near the North Pole and the coldest air stays locked up near and north of the Arctic Circle. But, when the polar vortex weakens, there is often a southward discharge of much colder air in part of the U.S.

A piece of the polar vortex will set up shop over southeastern Canada this weekend. In this position, cold air will be funneled southward.

“A direct discharge of Arctic air will sweep into the northeastern quarter of the nation starting this weekend,” AccuWeather Senior Meteorologist Brett Anderson said, adding that the cold will persist into early next week.

Temperature departures of 10-20 degrees Fahrenheit below average are in store, forecasters say. Typical highs in late March range from around 40 F in northern Maine to the low 60s around the Chesapeake Bay.

At the peak of the cold wave early next week, high temperatures are likely to be in the 30s in Boston and New York City, near 40 in Philadelphia and the mid-40s in Washington, D.C., where the National Cherry Blossom Festival is underway. Highs may not even hit the freezing mark over the central and northern Appalachians for a day or two as the weather will feel more like early February.

“Widespread, gusty northwest winds may send AccuWeather RealFeel® temperatures plummeting as low as zero F across the Appalachians and into the 20s along the I-95 corridor as soon as Sunday morning,” Anderson said.

Cloud cover and a breeze may prevent the temperature from plunging to mid-winter levels at night, but the temperature is forecast to dip below freezing over much of the region, including in many of the major cities along the Interstate 95 corridor early next week.

People who have started outdoor gardens may need to cover tender plants, and meteorologists caution that potted plants should be brought indoors.

Now that spring is here, it is getting late in the season for widespread snowfalls to occur. However, AccuWeather forecasters say the upcoming pattern will serve up some chances of winter precipitation.

“As the cold air passes over the open waters of the Great Lakes, there will likely be widespread rain and snow showers reaching well to the south and east,” Anderson said. “While most roadways will just be wet, bursts of locally heavier snow in the higher elevations may make for difficult travel at times due to poor visibility.”

Snow can cover grassy areas and even leave a bit of slush on some paved surfaces from time to time over the mountains this weekend and into next week. A few wet snowflakes mixed in with rain showers are not out of the question in parts of the I-95 corridor as well.

As the big dip in the jet stream pivots northeastward during the middle of next week, a warmup is in store for the region which may allow temperatures to swing above average for a few days.

However, more abnormally cold air may return in early April.

“Looking at long-range weather patterns across the globe, there is support for another big dip in the jet stream in the Northeast perhaps centered on April 3 and 4,” Pastelok said.

After that, AccuWeather’s long-range forecasting team expects more typical temperature fluctuations for the middle of April.

“The chill following any cold fronts looks to be normal or unremarkable for the middle two weeks of April, but there is the risk for more jet stream dips with bigger cold shots later in April or early May and that could then set the stage for late-season frosts moving forward in the Northeast,” Pastelok explained.