The 51-pound musky was released back into the water. Luke King said he could not "take the life of something so beautiful."
By Lee Bullen March 24, 2022
Facebook
Twitter
Linkedin
Email 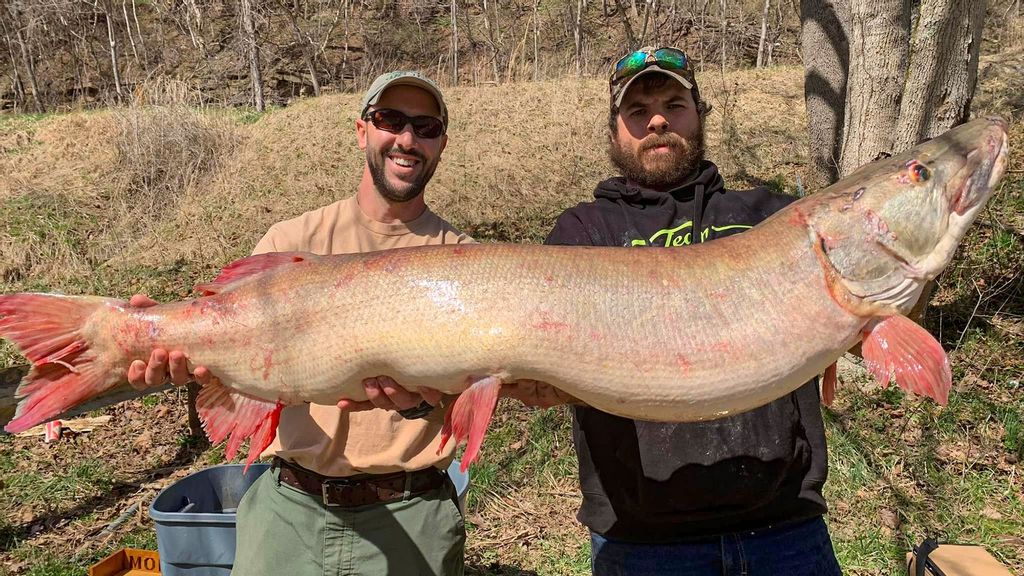 An official from the West Virginia Division of Natural Resources certified the catch and King released the muskellunge back into the water.

He shared images of his huge catch on social media with the message: “This morning my dream came true. I caught the new WV state record musky for both length and weight. She was 55 1/16” long and weighed 51 pounds on certified scales.

“Thanks to Aaron Yeager for coming and verifying my fish, Brady Lewis Daniel Hoard for helping keep her alive in the net and Becky Jackson for bringing my bump board from the house. Released back into the water.”

Luke, who lives in north-central West Virginia, told Zenger: “I was using a small 6-inch jerk-bait musky lure when she struck. The fight only lasted a couple of minutes, and I had the fish in the net.

“I was using heavy gear, a 100-pound braided line and an 8-foot, 6-inch heavy action rod with a 300 size bait-casting reel, which was suited to handle a fish of that size. I’m an avid catch-and-release angler. I never keep any musky when caught, so I wanted to do the same thing with this fish.”

King said: “My previous record was 53.25 inches long. I have caught many musky in the 50 inch to 53 inch range, but never one the size of this fish.”

“I always return my musky to the water. Who am I to take the life of something so beautiful!”

“I’ve been musky fishing for around 18 years, and I normally get out one to two days a week. She fought very hard, but I had the gear to tame her. The fight only lasted a couple of minutes.”

Muskellunge are the largest members of the pike family and normally grow to around 50 inches in length. They have large mouths with strong teeth in their mouth roof and lower jaws.

They are most commonly found around the Great Lakes in North America and are considered an effective ambush predator, feasting on other fish species.

«Previous Post
4 Tips To Lure Birds To Your Garden, And Why That’s Important»Next Post
VIDEO: Odessa Firefighters Rescue 2 Cats As Search For Survivors In Kharkiv Continues