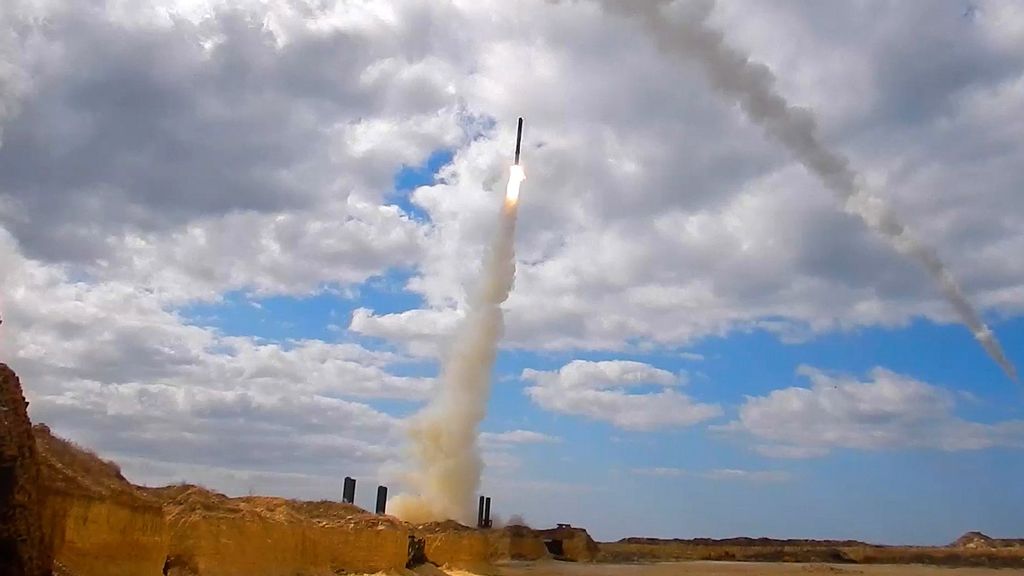 Russia says it has set up a K-300P Bastion-P mobile coastal defense system pictured in this screenshot from a video said to be filmed in Ukraine. (Russian Defense Ministry/Zenger)

Russia says it has launched missiles from mobile coastal defense systems that it claims have hit the “military assets of the Ukrainian Armed Forces.”

It is currently unclear where the footage released by the Russian Ministry of Defense on March 23 was filmed, but the images appear to show the Bastion mobile launch system pointing toward the sky while protected behind some low, coastal cliffs on what appears to be a sandy beach.

Military camouflage appears to cover Russian gear, and seconds into the footage, a first missile is fired.

The K-300P Bastion-P mobile coastal defense system is typically armed with anti-ship missiles and was designed to take out maritime vessels. But it can also be directed at other targets. The system, known in the West as SSC-5, is equipped with electronic jammers and anti-aircraft defenses.

“The missile has a two-stage propulsion system. It uses solid-fuel ramjet for the sustained supersonic cruise. The booster is ejected by the airflow after it has burned out,” Military Today says on its website while also mentioning that “this missile can carry nuclear or conventional warheads.”

Russian President Vladimir Putin was quoted in the state-owned news outlet Russia Today, now RT, as saying in 2015 that the “Bastion’ is a defensive complex that protects the coast, protects the territory. It does not attack anyone, but it is an effective, modern, high-precision weapon.

“So far, no one has such a weapon. This is perhaps the most efficient onshore complex in the world today.”

Russia invaded and subsequently annexed Crimea from Ukraine in 2014, and now it has staged a part of its invasion of Ukraine from the peninsula, allowing it to orchestrate a three-pronged land offensive.

“At some point, in order to make it clear that Crimea is reliably protected, we transferred these Bastion coastal complexes there,” Putin was quoted as saying in Russia Today in 2015.

In the video released this week, a missile goes straight up into the sky before pivoting 90 degrees thanks to a secondary blast mechanism located toward the tip of the nose cone, then a piece of the missile detaches and the ordnance shoots off horizontally toward its target.

Seconds later, the video shows a second missile being fired. A third missile then shoots off just like the first two before a fourth blasts off as the footage ends.

Troops have crossed the border from Russia from the east, with land forces also crossing over from Russian ally Belarus, whose company Tekhnosoyuzproekt reportedly participated in developing the missile system with Russia, from the north.

Finally, a land offensive came from the south, which is where Russian-controlled Crimea is located.