Record highs have been tied or broken across much of the state this week.
By Ryan Adamson March 24, 2022
Facebook
Twitter
Linkedin
Email 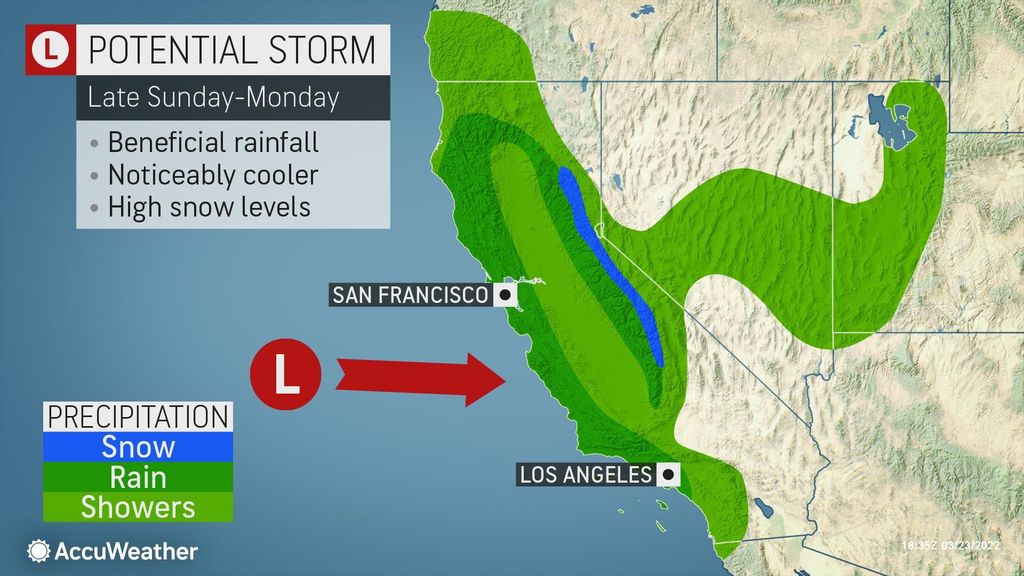 According to the United States Drought Monitor, the entire state of California is in moderate drought or worse, but there is some much-needed moisture on the way. (AccuWeather)

The first three months of 2022 have not been what the doctor ordered when it comes to easing drought concerns in California, particularly following a very wet December that resulted in a surplus amount of rain and snow in the Golden State.

With spring underway and the end of the rainy season in sight, AccuWeather forecasters say there is some good news on the way following the recent stretch of record-breaking warmth and dry weather.

“A storm tracking eastward across the Pacific Ocean will likely arrive along the shores of Central California on Sunday evening and bring a swath of much-needed moisture,” said AccuWeather Meteorologist Alyssa Smithmyer.

Record highs have been tied or broken across much of the state this week and the hot, dry weather has only worsened drought conditions. Los Angeles International Airport recorded a high of 84 F on Wednesday, tying the daily record last set in 2008. In nearby Burbank, California, Bob Hope Airport recorded a high of 89, breaking the previous daily record for March 23 of 88 degrees from 1953.

Unseasonable warmth will stick around into the weekend before Mother Nature delivers rainfall and cooler air. In some locations, precipitation amounts may equal or exceed what has fallen so far in all of 2022 combined.

“There is the potential for Los Angeles to double its rainfall for the entire year so far with this storm,” stated AccuWeather Senior Meteorologist Alex Sosnowski.

Downtown Los Angeles has recorded only 4% of its normal rainfall with 0.34 of an inch of rain since Jan. 1, but that total may be doubled by the time Monday is over.

“Rainfall amounts ranging from 1 to 1.5 inches may be possible along the south-central coastline of California from late Sunday to Monday,” said Smithmyer.

According to the United States Drought Monitor, the entire state of California is in moderate drought or worse. More than 90% of the state is experiencing severe drought conditions, and more than 35% of California is experiencing extreme drought, which is the second-highest drought category. The state’s exceptional drought, the worst category, was wiped out with the ample December precipitation, but conditions have been deteriorating due to the lack of precipitation in January, February and March.

Other cities along the California coast have received more rainfall thus far in 2022, but the amounts are still well below normal. The 0.73 of an inch in San Francisco is just 7% of the normal 9.99 inches through March 23. San Diego has fared slightly better with 1.78 inches, which is one-third of the typical 5.36 inches.

Even though temperatures will be lower compared to previous days, cold air is not expected with this system as snow levels persist around 7,000 feet in elevation. Without snowpack building in the mountains, this will not provide needed runoff during the normally dry summer months.

With the end of the wet season on the doorstep, this may be one of the last opportunities for any substantial rain or snow, at least in Southern California.

“By Tuesday and Wednesday, the storm will likely be tracking into the central Rocky Mountains, and dry conditions are expected to return to California,” said Smithmyer.

Looking down the road, forecasters say there may be another opportunity for precipitation sometime during the first full week of April. Colder air may be in place by then, which may provide more of an opportunity for snow in the mountains. However, snow in the mountains of California typically begins to melt rapidly in April, so this may provide only a temporary boost to lakes and reservoirs.