The Miami Hurricanes and Iowa State Cyclones will not be bound to any meteorological laws when they take the court this Friday.
By Mary Gilbert March 24, 2022
Facebook
Twitter
Linkedin
Email 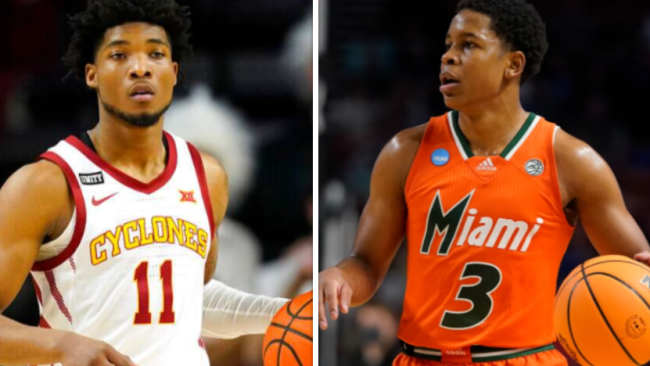 The next opponent up for the Iowa State Cyclones in the NCAA Men's Division I basketball tournament is none other than another school with a weather-themed nickname: the Miami Hurricanes. But which is more powerful, cyclones or hurricanes? (AccuWeather via AP)

The NCAA Men’s Division I basketball tournament is down to its “Sweet 16” teams after a wildly entertaining first and second round of play. While the weather is never a factor in “March Madness” since the games are played indoors, there is one particular matchup this weekend that has piqued the interests of forecasters.

After pulling off a couple of significant upsets in the Midwest Region of the bracket, the Iowa State Cyclones, an 11 seed, punched a ticket into the round of 16. The next opponent up for the Cyclones? Well, it’s none other than another school with a weather-themed nickname: the Miami Hurricanes, a 10 seed.

But what exactly is the difference between a cyclone and a hurricane anyway? And which is more powerful? Let AccuWeather meteorologists explain.

It turns out, at the most basic level, there is no difference.

Essentially, a cyclone is a storm that “spins” in a specific direction as defined by each of Earth’s two hemispheres. “A cyclone is defined as a weather feature in which winds spiral into an area of lower or lowering atmospheric pressure, turning counter-clockwise in the Northern Hemisphere and clockwise in the Southern Hemisphere,” AccuWeather Senior Meteorologist and Hurricane Expert Dan Kottlowski explained.

Once the discussion is elevated past anything other than the most basic level, there are some differences as to how meteorologists define and classify different types of cyclones.

A cyclone can range in scale drastically, from just a few feet in diameter to hundreds of miles wide. Meteorologists tend to work in two main “scales” when analyzing the weather. The synoptic scale, or “larger scale,” is what meteorologists look to when predicting weather systems or storms as a whole.

An example of a storm on the synoptic scale would be a tropical cyclone, known as a hurricane in the Atlantic and East Pacific Ocean basins, according to the National Hurricane Center (NHC).

Tropical cyclones take on different names depending on the portion of the globe in which they occur.

“When these weather phenomena were named hundreds, perhaps more than a thousand, years ago, there was no organized worldwide community giving set names for these phenomena,” Kottlowski explained. “So the terms hurricane, typhoon and cyclone all describe the same weather phenomenon.”

The other main scale is the mesoscale, or “smaller scale,” which mainly describes smaller parts of a whole system. Individual thunderstorms that can produce tornadoes, and often the tornadoes themselves, would fall on this scale.

A tornado is a cyclone, Kottlowski pointed out.

Many years ago, the word “cyclone” was used as a popular nickname for a tornado as it is a spinning storm.

“In fact, many people in the Plains and Midwest still call tornadoes ‘cyclones,'” Kottlowski added, which appears to be the explanation for the Iowa State sports teams’ nickname.

Iowa State first adopted “cyclones” as its moniker way back in 1895 since the state is no stranger to tornadoes. More recently, a study conducted by the National Weather Service (NWS), found that between the years 1980 and 2019 a total of 1,928 tornadoes were recorded in Iowa. Earlier this month, a devastating series of tornadoes tore through parts of the Midwest. In central Iowa alone, that severe outbreak claimed the lives of seven people, four of which were members of the same family.

In modern meteorology, using the term “cyclone” to describe a tornado has largely fallen out of favor as it is considered too generic and can often be confusing.

In a way, a cyclone could be almost anything that spins, but a tornado usually conjures a very specific image in the minds of the public. When communicating weather risks, AccuWeather forecasters know it is important to be as clear and specific as possible in order to save lives and protect property.

Now that all the cyclone technicalities are out of the way: Which of these potent, “spinning” forces of nature is more powerful — the tornado or the hurricane?

According to Kottlowski, hurricanes take the win in that particular comparison due to their size.

In addition, tropical cyclones can actually spin up tornadoes due to their large cyclonic rotation and friction, Kottlowski explained.

Hurricanes also have the sheer force to move massive amounts of water. Storm surge is the abnormal rise in water levels caused by a storm and is often considered the greatest threat to lives and property during a tropical storm or hurricane.

As for Miami, or “The U” as it’s also known, there is no secret as to why the school’s athletic programs are named after these powerful weather systems. Hurricanes are a part of life in South Florida, and the region is regularly at risk for tropical systems each year during Atlantic hurricane season, which begins on June 1 and ends Nov. 30. South Florida has been impacted by some of the most powerful hurricanes in history. One of these storms was Category 5 Hurricane Andrew in 1992.

Hurricanes can certainly take the cake in terms of the scale of damage they are capable of causing, but when the two forces of nature are compared based purely on maximum wind speed, an argument can be made in favor of tornadoes actually coming out on top.

The Saffir-Simpson Hurricane Wind Scale is the scale the NHC uses to classify tropical cyclones and is based purely on wind speed. The highest category on the scale is a Category 5 hurricane and to achieve this status, a tropical cyclone must have maximum sustained wind speeds of 157 mph or more.

The Enhanced Fujita scale is used by the National Weather Service (NWS) to assign a tornado a rating based on estimated wind speeds and related damage. The highest category on the scale is an EF5 tornado, which is used when damage is consistent with estimated wind gusts greater than 200 mph.

It’s worth noting that some of the strongest hurricanes on record have been capable of producing wind gusts in excess of 200 mph, further heightening the debate over whether tornadoes or hurricanes are more powerful. As recently as 2019, Hurricane Dorian produced wind gusts higher than 220 mph when it was at peak Category 5 strength. Its sustained wind gusts at that point were 185 mph.

Even Mother Nature may be split on her winner in the matchup between tornadoes and hurricanes. Thankfully, the Miami Hurricanes and the Iowa State Cyclones will not be bound to any meteorological laws when the two teams take the court this Friday.