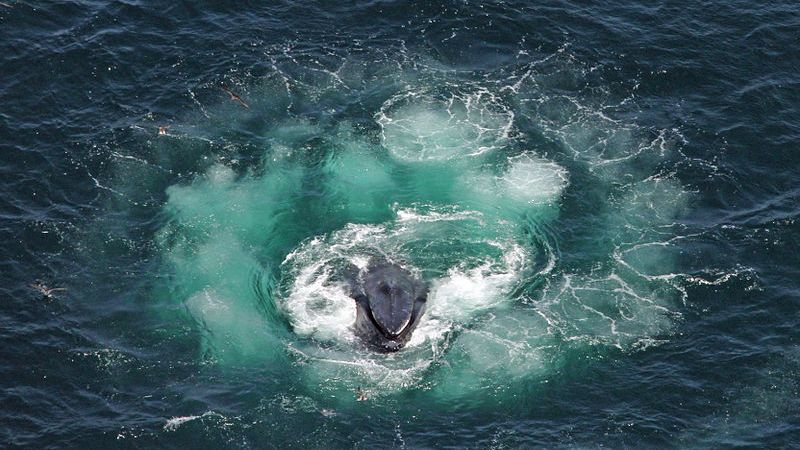 Humpback whales are filter-feeders that gulp down prey such as tiny krill and small fish that they strain out with the bristly baleen structures in their upper jaws. They are able to corral their prey with bursts of bubbles, allowing them to eat at leisure. (Christine Khan/NOAA)

Baleen plates are bristly, flexible comb-like structures inside the mouths of toothless whales that filter out the food the whales gulp. They have now been found to hold a chemical record of the whales’ feeding patterns and adaptation to a changing environment.

Researchers at the University of New South Wales in Sydney, Australia, published a study in the journal Frontiers in Marine Science linking the feeding patterns of humpback and right whales to climate conditions by referring to historical records and samples of baleen.

“What is incredible is that all of this information about dietary and spatial patterns has been unlocked just through analyzing plates in their mouths,” said researcher and lead author Adelaide Dedden at the University of New South Wales.

Nearly extinct by the mid-20th century because of unregulated hunting, whales have since become a protected species. For whalers, Eubalaena australis was the “right” whale because of its prized baleen, or whalebone, that was made into buggy whips, hat brims and women’s corsets. Megaptera novaeangliae, the humpback whale, was equally prized for its baleen and oil.

By comparing the information they found stored in humpback and right whale baleen to environmental data, the research team sought to determine whether the whales’ behavior reflected climate change and responses to La Niña.

La Niña events, which recently caused flooding in Australia, “are also not good for the humpbacks that migrate along the east coast of Australia,” said co-author Tracey Rogers, a professor of marine ecology at the University of New South Wales.

La Niña, Spanish for “the girl,” is a colder oceanic and atmospheric phenomenon and counterpart of El Niño, Spanish for “the boy,” forming a climate pattern with dramatic effects on weather and sea life. La Niña effects typically last 9–12 months but can persist for up to 2 years, according to the National Oceanic and Atmospheric Administration.

La Niña reduces the availability of food in the Southern Ocean, affecting the whales that feed there.

“Baleen whales are enormous and need huge amounts of food. This makes them vulnerable to changes in the environment, but this is also compounded by their survival strategy,” Rogers said. “They fast for the long periods when they leave their productive feeding grounds to breed. That’s why they’re extremely susceptible to changes in ocean-atmospheric cycles as they can drive food availability.”

“Humpback whales off the east coast of Australia have just been taken off the endangered list as their population is now fully recovered from commercial whaling. So their numbers have increased dramatically. However, they still face one of the biggest threats of all — climate change,” Dedden said in an email to Zenger.

Baleen hangs in long, slender keratin plates from the upper jaws of filter-feeding whales, which take in small prey ranging from nearly microscopic krill to larger fish. Their prey leave behind stable isotopes or chemical clues to their eating habits.

“As the baleen grows, biochemical signals from their food are trapped. Like the information on the pages in a book, they don’t change with time,” said Rogers, adding that this had allowed the team to reconstruct a whale of a tale about what the mammals ate and where they went to get their food.

The research shows that the variability of these chemical clues in the baleen means that the whales change their feeding patterns according to the availability of food.

“Oscillation patterns in isotopes assimilated along their baleen plates are known to reflect changes in the whale’s physiology, but we also found links between this isotope variability and changes in the environment happening at the time,” Dedden said.

In her email, Dedden noted that the whales’ range has probably remained the same during the period examined. “Climate controls the extent of sea ice and thus the abundance of krill in the region (as krill rely on sea ice for survival),” she wrote.

Krill (Euphrasia superba) thrive in the cold waters off Antarctica and are an essential food source.

Referring to the whales, Dedden wrote, “They are not necessarily susceptible as they migrate. Rather, they are susceptible to fluctuations in prey [availability] during the summer feeding period prior to their winter migration.”

During the winter months of the Southern Hemisphere, humpbacks visit warm tropical waters to breed before heading back to feed in the summer Antarctic waters. During their migration toward the tropics, whales find no reliable food sources, thus depending on their stored fat.

“As filter feeders, they rely on big aggregations of krill because it is energetically costly for them to feed,” Dedden said.

“[With] humpbacks from the east coast of Australia showing signs of reduced feeding following La Niña periods, it means they’re potentially struggling to build up the energy reserves required during summer,” Dedden said.

While reduced sea ice during these times may be negative for east coast humpbacks, humpbacks off the west coast may not experience the same environmental conditions.

“Humpbacks and southern right whales from the Indian Ocean showed the opposite signal — better feeding opportunities during these times,” Dedden wrote. “This signal appeared to be driven by changes in the Southern Annular Mode, another climate signal that drives resource availability in the Southern Ocean.”

As La Niña events are predicted to increase in intensity and frequency, these whales may see more strandings in the future, according to Rogers.

Referring to increased whale strandings, Dedden wrote, “Naturally, as their population increases, you are going to see more entanglements and more strandings as there are more whales migrating up our coast. So while we have seen a natural increase, this may be due to population growth, not environmental factors.”

“East coast humpbacks have shown signs of adapting to different feeding strategies in other known productive regions on their migration route… something that future research could look at,” Dedden said.

Having recognized historical trends in baleen samples, the researchers believe that they can predict future whale behavior.

“The information from the study will also be useful for managers now to know ahead of time those years whales are likely to be more vulnerable, so they can be prepared and, if needed, change their management strategies around whale entanglement and stranding,” Rogers said.