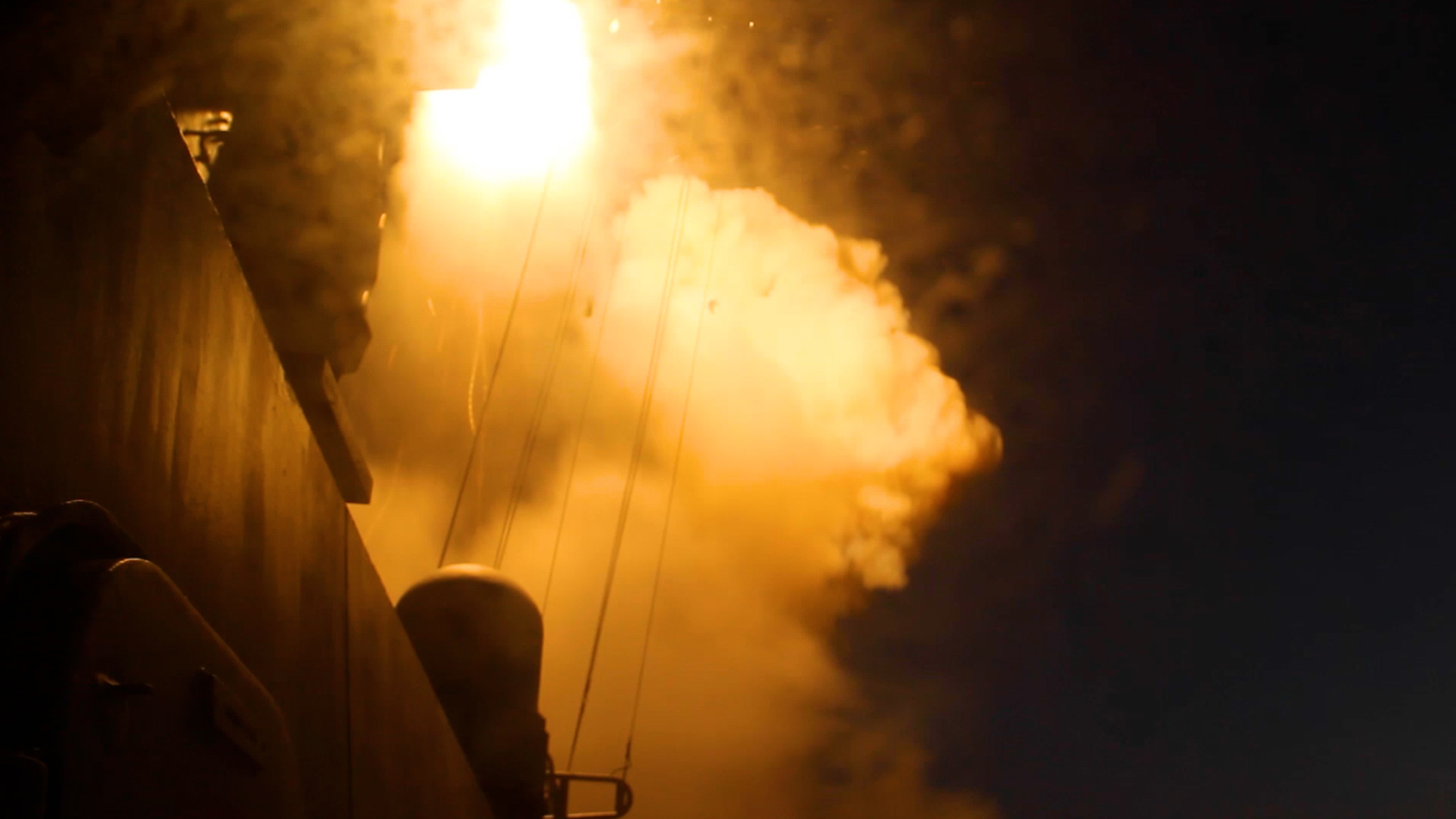 A Russian Kalibr cruise missile is seen being fired from a position said to be in the Black Sea as seen in this screenshot from a video. (Russian Ministry of Defense/Zenger)

A Russian Navy ship has apparently fired a volley of missiles at Ukrainian positions as the war between the neighboring nations is ending its fourth week.

The footage “shows the launch of high-precision Kalibr missiles on the military assets of Ukraine,” the Russian Ministry of Defense said in a statement released along with the video.

The footage, which appears to have been shot aboard the vessel itself, shows eight missiles being fired, and naval personnel can be heard communicating with one another.

The Russian-made Kalibr guided-missile system was originally developed in the 1980s and based on a modular design allowing the missiles to be fired from different launch platforms, including naval vessels. They are reportedly able to very quickly pivot 90 degrees to travel parallel to the ground after being fired.

It is currently unclear what the intended targets for the missiles were, with the Russian Ministry of Defense only claiming that they were aimed at Ukrainian military assets.

However, a mounting body of evidence shows that Russia has changed strategy and is now targeting more civilian infrastructure in an apparent bid to break Ukrainian morale after the Kremlin’s planned invasion failed to result in Ukraine’s surrender and became bogged down when met with staunch resistance.

Various unverified videos posted on social media on Monday appear to confirm the number of missiles launched and the location from which they were fired, with the Russian Ministry of Defense then releasing the footage.

RIA Novosti, a Russian state-owned news agency, said a resident of Sevastopol recorded a video from which it is clear that the volley was fired from the Black Sea from the small missile ship of project 21631, which is listed in an online database as a Russian warship.

Sevastopol, the largest city in Crimea, is internationally recognized as belonging to Ukraine but was annexed by Russia in February 2014.

The U.S. Naval Institute reported on March 21 that about a dozen Russian warships remain in the Black Sea, raising concerns that Moscow is considering an amphibious assault on the Ukrainian port city of Odessa.

“Is it the prelude to an assault on Odessa? Is it a diversionary tactic to sort of hold and fix Ukrainian troops in the south so that they can’t come to the relief of their comrades in Mariupol and Kyiv? It’s difficult to know,” Pentagon Press Secretary John Kirby said on March 21.

It is believed that some Russian military vessels were moved from the Arctic and Baltic to the Black Sea shortly before Russian land forces crossed the border into sovereign Ukrainian territory in a move that has been condemned the world over, with U.S. President Joseph R. Biden Jr. last week calling Russian President Vladimir Putin a “war criminal.”