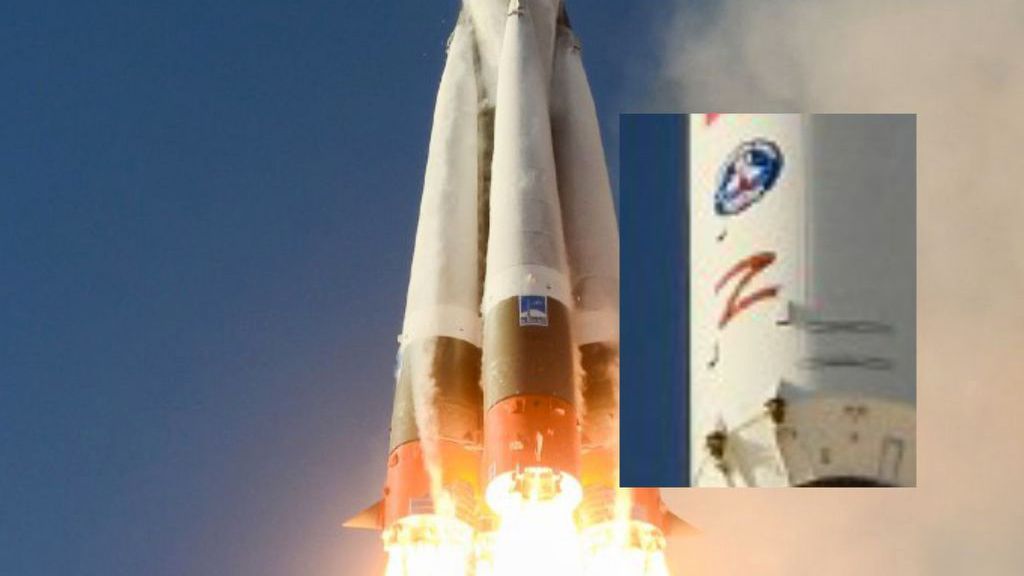 Russia launched a Soyuz-2.1 with the letter Z written on its payload (inset) from the Plesetsk Cosmodrome. (Russian Ministry of Defense/Zenger)

Russia has launched a Soyuz space rocket bearing the letter Z, which has also been spotted on the country’s tanks invading Ukraine.

The launch was of a rocket carrying a military communications satellite in its payload to orbit the Earth, the Russian Ministry of Defense said. Accompanying images of the launch and its preceding preparations was a statement from the defense ministry which said, “The Soyuz-2.1a space rocket has joined the #ZaNashikh support action for Russian servicemen!”

Footage of the launch from the Plesetsk Cosmodrome in northwestern Russia released by the defense ministry shows the Soyuz spacecraft taking off from its launchpad.

After running several views of the launch itself, the video backtracks in time to show the vehicle’s launch preparations, with the large rocket being carried horizontally by a transport vehicle to the launchpad.

Once there, the rocket is maneuvered into an upright position, with the payload section at its top bearing the letter Z being focused on for a few seconds for added emphasis.

The Russian Armed Forces have reportedly been daubing their military vehicles with that letter (and others) during their invasion of Ukraine, apparently to distinguish themselves from Ukrainian forces. Z has since gained traction within Russia as a symbol of support for the invasion.

It is currently unclear if the launch itself violates the United Nations’ 1966 Treaty on Principles Governing the Activities of States in the Exploration and Use of Outer Space, which states that such activities “shall be carried out for the benefit and in the interests of all countries … and shall be the province of all mankind” and that it is “not subject to national appropriation by claim of sovereignty, by means of use or occupation, or by any other means.”

It does appear that Russia is complying with the part of the treaty that states that “astronauts shall be regarded as the envoys of mankind,” as it has denied media reports that it was considering stranding a U.S. astronaut who is slated to soon return to earth from the International Space Station.

Russia has stated that it will indeed be giving America’s Mark Vande Hei a ride home on a Russian spacecraft at the end of this month, despite tensions between the West and the Kremlin over Russia’s invasion of Ukraine.

Russia has also denied its latest crew of ISS cosmonauts wore yellow and blue suits upon their arrival at the station on March 18 to support Ukraine. Cosmonaut Oleg Artemyev said that the colors, which are those of the Ukrainian flag, had been selected because they are the colors of the university from which they graduated, the Bauman Moscow State Technical University.

Such space-related disputes aside, earlier this month, the U.N.’s International Court of Justice ruled Russia’s ongoing invasion of Ukraine is illegal and ordered Russian President Vladimir Putin to remove his troops immediately. In addition, former British Prime Ministers Sir John Major and Gordon Brown have called for the creation of a Nuremberg-style international tribunal to investigate Putin’s actions.

The proposal has been co-signed by intellectuals and academics, as well as Ukrainian Foreign Minister Dmytro Kuleba and Benjamin Ferencz, who is 102 years old and prosecuted Nazi war criminals during the Nuremberg trials in the late 1940s.