Biden heads to Europe to meet with the leaders of NATO and G7 for discussions about the Ukraine conflict.
By Joseph Golder March 23, 2022
Facebook
Twitter
Linkedin
Email 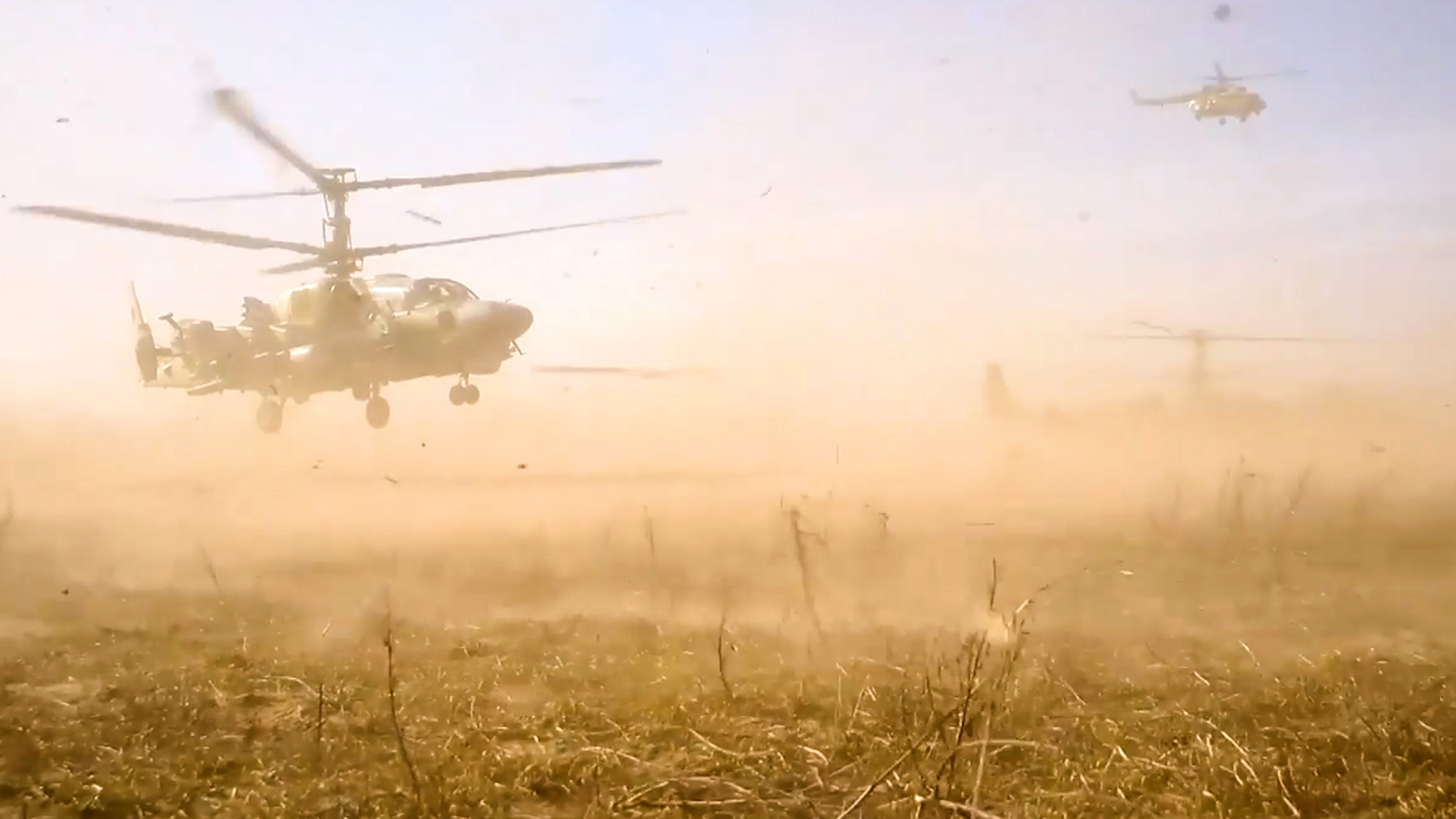 Russian Ka-52 helicopters allegedly destroyed a tank of the Armed Forces of Ukraine using the anti-tank missile system Whirlwind in Ukraine, with the helicopters depicted in this screenshot from a video. (Russian Ministry of Defense/Zenger)

The Russian Ministry of Defense apparently took out a Ukrainian tank using what is known as the “Whirlwind” anti-tank missile system.

Footage the ministry released shows Ka-52 attack helicopters taking off and going for a spin. There are no images showing the alleged destruction of the Ukrainian tank, as claimed by the Russian Ministry of Defense.

The footage is accompanied by what appears to be a targeting system with something in its sights, but it is difficult to distinguish what the image shows. The Russian Ministry of Defense did not provide the location of where the event allegedly took place.

“From 7,000 meters: the destruction of a tank of the Armed Forces of Ukraine by the ‘Whirlwind’ anti-tank missile system,” the Russian Ministry of Defense said in a statement accompanying the released footage.

“A link of Ka-52 helicopters in the course of fire support of the advancing troops destroyed enemy tanks with the Vikhr anti-tank missile system. The task was performed without entering the air defense zone from the hovering mode,” the March 20 statement added.

“Vikhr” means whirlwind in Russian and is the Russian’ military’s unofficial name for the 9K121 Vikhr system, known to a NATO forces as the AT-16 Scallion. It is a laser-guided, anti-tank missile system that can be launched from navy warships and some fighter jets, as well as Ka-50 and Ka-52 helicopters.

U.S. President Joseph R Biden Jr. left for Europe Wednesday morning, where he is scheduled to spend two days in Brussels. On Thursday, Biden will attend a summit of NATO leaders. He will also participate in a pre-scheduled meeting of the European Council and meet with leaders of the Group of Seven (G7) major industrial nations.

“The president is traveling to Europe to ensure we stay united, to cement our collective resolve, to send a powerful message that we are prepared and committed to this for as long as it takes,” Jake Sullivan, Biden’s national security adviser, said on Tuesday.

“There will be hard days ahead in Ukraine,” Sullivan said. “This war will not end easily or rapidly.”

On Friday, Biden will travel to Warsaw, Poland, to hold a meeting with Polish President Andrzej Duda.