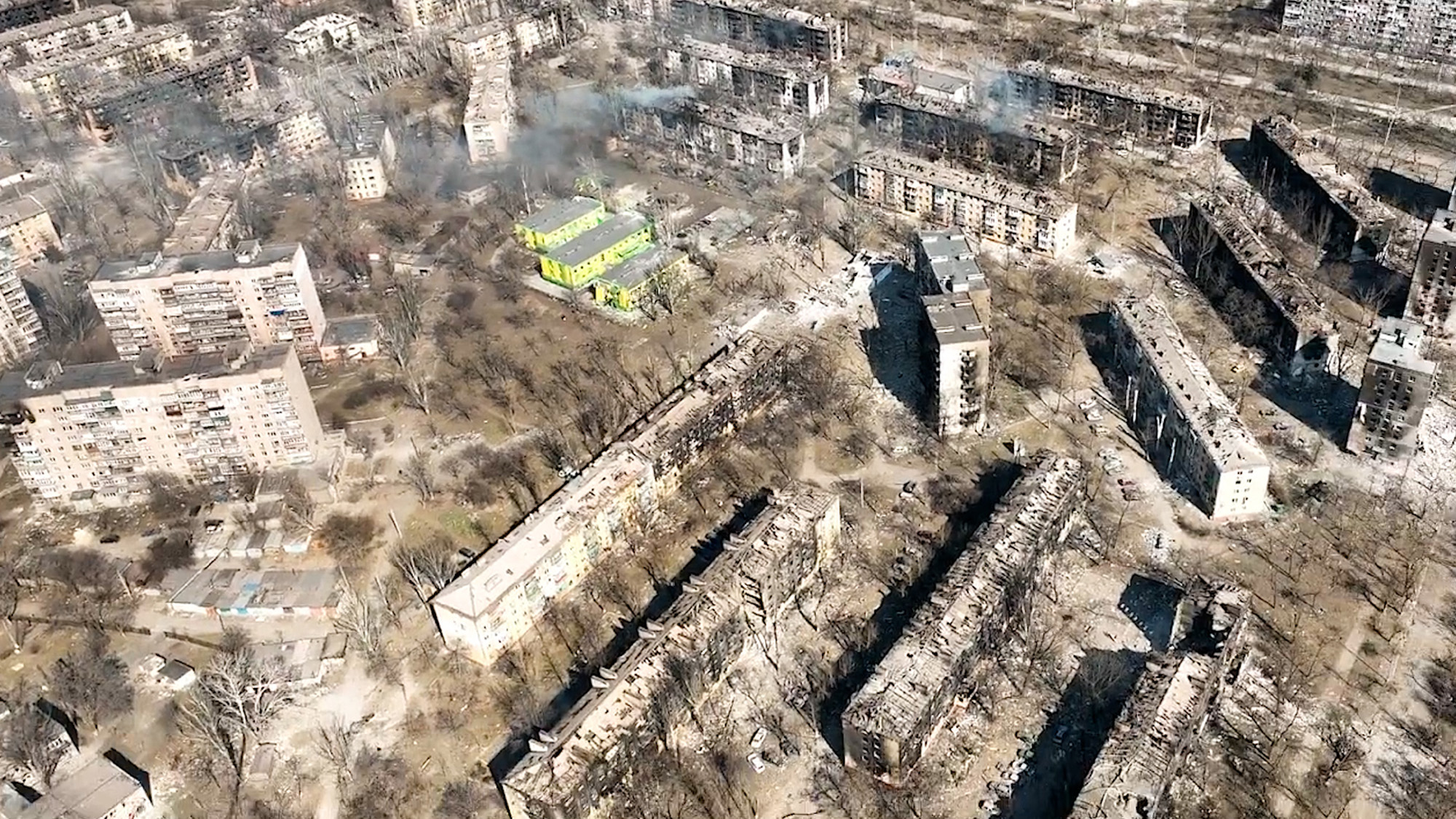 The besieged eastern city of Mariupol is seen from above in this screenshot from a video after the Russian shelling in Ukraine. (@Polk_Azov/Zenger)

Footage shared by a unit of the Ukrainian military graphically shows the devastation in the eastern city of Mariupol, which used to be called home by a little more than 430,000 people, according to the country’s State Statistics Service.

The images show what appears to be a largely destroyed and desolate city, with numerous buildings nothing more than shells. Nonetheless, there are still said to be approximately 100,000 starving, injured, dehydrated and likely shellshocked people trapped in the besieged city.

The footage was shared by Ukraine’s Azov Regiment, also known as the Azov Battalion, whose troops have been engaged in a fierce and lengthy battle with Russian forces in eastern Ukraine.

“This is Mariupol today. Like a dead city shot by the enemy,” the Azov Regiment, which is now part of Ukraine’s national guard, said in a statement accompanying the video. “But [Mariupol] will live. People are breathing there — hungry, in the basements of burning houses. Their hearts are still beating under the rubble in the hope of salvation. Mariupol is in pain. However, it is still a living organism waiting to be saved.”

The images of the devastation circulated as Ukrainian President Volodymyr Zelensky said in a March 22 video address that nearly 100,000 people are trapped in Mariupol under “inhumane conditions.”

“No food, no water, no medicine. Under constant shelling,” he said about the situation in the city. “For more than a week, we have been trying to organize stable humanitarian corridors for Mariupol. Unfortunately, almost all our attempts are thwarted by the Russian occupiers, shelling or deliberate terror.”

Zelensky also said that one of the humanitarian aid corridors had been blocked by the Russians and that “employees of the State Emergency Service and bus drivers were taken prisoner.”

Zelensky is expected to address the NATO summit focusing on Ukraine in Brussels via video link on Thursday.

Secretary-General of the United Nations Antonio Guterres said on Tuesday that it was time for a diplomatic solution to the “unwinnable” and “indefensible” war to be found.

“Sooner or later, it will have to move from the battlefield to the peace table. This is inevitable,” he said in New York City.

“The Ukrainian people are enduring a living hell — and the reverberations are being felt worldwide with skyrocketing food, energy and fertilizer prices threatening to spiral into a global hunger crisis,” the U.N. chief added.

The U.N. Security Council has held numerous meetings on Ukraine since late January but because Russia, as one of five permanent members of the 15-member body, has veto power, it has not taken any significant action.