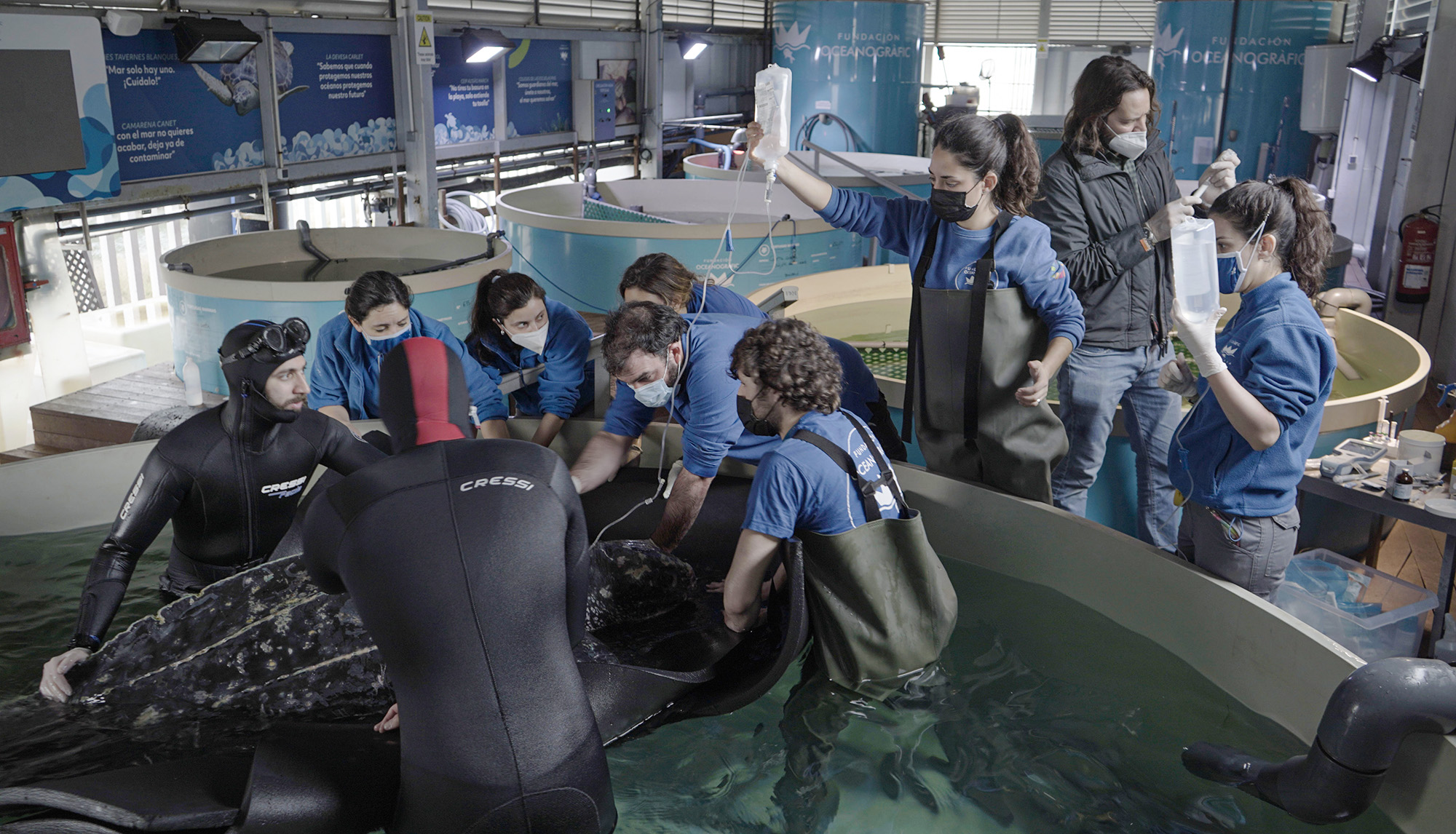 Caring vets treated a huge leatherback turtle after it became entangled in a fishing net at a Spanish port and suffered multiple injuries.

The large turtle was treated at Oceanogràfic València, an oceanarium in the Spanish city of Valencia, and returned to sea on March 21. However, the turtle subsequently died.

The marine animal first turned up at the Port of Mazarron in the Spanish region of Murcia on March 19. It had sustained injuries to its flippers and shell.

The turtle, which weighed 507 pounds, was almost 5 feet in length.

After being rescued in the port, it was taken to the animal recovery center at Oceanogràfic València by officials from the Directorate General for the Natural Environment and the Wildlife Recovery Centre of the Region of Murcia.

The aquarium said in a statement March 21: “Aquarium professionals carried out the relevant veterinary procedures, physical examinations, ultrasound, blood tests, etc., and healed the multiple lesions and erosions that it had all over its body.”

Although its initial condition was weak, the animal responded to treatment and was later returned to the sea in Cartagena.

The leatherback turtle is one of the largest turtle species on the planet, and many aspects of its biology are still unknown.

For this reason, a satellite device was installed on the turtle’s shell, which provides scientists with information about the animal’s routes and behavior.

On March 22, a day after its release, Oceanogràfic València released an update stating that “despite titanic efforts between institutions” to save the turtle, it had died. The oceanarium said the turtle suffered “a sudden regression despite having shown a favorable recovery during the 48 hours” it was in their care.

“Technicians will carry out the necropsy of the specimen to investigate and determine the causes of its death in order to bring knowledge about the health status of this species of turtle,” the statement said.

Leatherback turtles are listed as critically endangered on the International Union for the Conservation of Nature’s Red List and Spain also includes it in its List of Wildlife Species under a Special Protection Regime.

They are the only species of sea turtle without scales and a hard shell. They are named for their tough skin and have existed since the age of the dinosaurs. Leatherbacks are highly migratory, some swimming over 10,000 miles a year between nesting and foraging grounds. Accomplished divers, they can dive thousands of feet, according to NOAA Fisheries.

The oceanarium said the main threats to the turtles are “the hunting of adult specimens on the beach, accidental death in fishing gear, and the plundering of their nests.”

The Spanish park, one of the largest aquariums in Europe, has received nearly 24 million visitors since 2003.

“The location of Oceanogràfic Valencia is derived from the city’s close relationship with the sea,” the park says on its website. “Beyond its recreational component, its main objective is to actively promote the conservation of the seas and their inhabitants and to disseminate the importance of this message among the population of the Community of València and the rest of the world.”